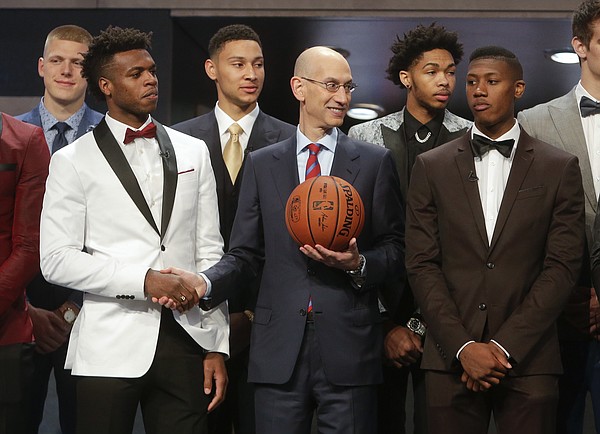 With all due respect to those lottery picks and the other big names from the 2016 NBA Draft class, if you asked me right now who I would pick to win Rookie of the Year in 2017, I’d lean toward a former Kansas basketball player, instead.

None of those former KU players are a threat to secure that trophy, which typically ends up in the hands of players who turn out to be all-stars or superstars. But there is one Jayhawk set to make his NBA debut next season who could easily become a force in the league for years to come.

True, Joel Embiid has not played basketball in more than two years due to injuries. But the man possesses undeniable talent.

Now reportedly 7-foot-2, the center at times during his freshman season at Kansas showed off footwork and shooting touch akin to a young Hakeem Olajuwon. So far, the No. 3 pick in the 2014 draft has been a disappointment for Philadelphia, but it will take only one spectacular, injury-free rookie season for all to be forgiven.

I'm technically still A ROOKIE... Next season is finally the one though #TrustTheProcess

Bearing in mind Embiid’s checkered injury history — low-lighted by back trauma that robbed him from finishing his one-and-done season at KU and a fracture of the navicular bone in his right foot (which he later re-injured) keeping him sidelined since — obviously nothing about his future is guaranteed. However, the 22-year-old from Cameroon appears to be healthier now than he has been since he left Kansas.

Sixers president of basketball operations Bryan Colangelo told reporters Embiid, who will be held out of NBA Summer League games for precautionary reasons, has been cleared for five-on-five basketball. 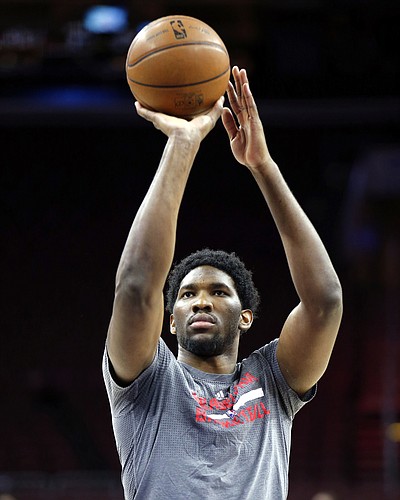 Let us assume the seemingly never-ending rehab is over, all goes to plan, and Embiid plays, say, somewhere in the neighborhood of 70 regular-season games next season with Philadelphia. The big man, with his powerful finishing ability and shooting range, will be given the opportunity to put up big numbers for a rebuilding franchise coming off a woeful 10-72 season.

The Sixers have no established star or face of the franchise returning to feature offensively. That role is open to be filled. While the organization likely has to temper its expectations publicly regarding Embiid because of the uncertainty that accompanies his string of injuries, you get the sense the team’s decision-makers are as excited about the potential of their inexperienced center as they are 2016’s No. 1 overall pick, Simmons.

The upcoming rookie of the year race very well could come down to the Sixers’ duo of the future, Simmons and Embiid. According to Bovada, an online sportsbook, Simmons, a 6-foot-10 ball-handling forward out of LSU, is the early favorite with 13/4 odds. Embiid is listed seventh, at 14/1, behind New Orleans’ Hield (11/2), the Los Angeles Lakers’ Ingram (13/2), Minnesota’s Dunn (15/2), Denver’s Jamal Murray (12/1) and Chicago’s Denzel Valentine (12/1).

Ben Simmons is favored to win #NBA rookie of the year. Joel Embiid has the seventh-best odds. #Sixers pic.twitter.com/QIVIc5hXI0

Simmons’ biggest asset at the next level might be his combination of passing ability and size. When he drives to create for teammates, the 19-year-old Australian will find a willing and able shooter and finisher in Embiid. As a matter of fact, the two even know each other a little bit. Now teammates in Philly, they once scrimmaged together as high schoolers in Florida, according to a story from The Inquirer’s Keith Pompey.

"He has great footwork and can score inside," Simmons said of Embiid. "I know how to get the ball to bigger guys down low.”

Turnovers, defensive breakdowns and losses all are on the horizon for both Simmons and Embiid as featured first-year players on a bad team. But when you look at the history of NBA Rookies of the Year, winning the award basically comes down to individual scoring numbers, not wins and losses.

Here are the previous 10 winners:

Philadelphia’s other recent lottery big men, Nerlens Noel and Jahlil Okafor, have been the subject of trade rumors, so you can figure the 76ers won’t mind featuring a healthy Embiid ahead of those two, should they both remain with the team.

Plus, Embiid is taller, more athletic and more versatile on both ends of the floor than Okafor, who averaged 17.5 points, 7.0 rebounds and 1.2 blocks for Philly while playing just 53 games this past season. It’s not too difficult to envision Embiid replicating or surpassing that production in his first season in the league, putting him firmly in the mix for the NBA’s rookie hardware.

Embiid wouldn’t be the first behind-schedule rookie to bring home the honor, either. Griffin, the No. 1 overall pick in 2009, missed the following season with the L.A. Clippers due to a broken left knee cap, only to return to the court in striking fashion a year later.

Can Embiid do the same after spending even more time away from competition? Can he out-shine his thoroughly hyped teammate, Simmons? Heck, can he just play an NBA game?

We’ll know soon enough. Personally, I’d answer yes to all of the above.

I would argue that if Joel Embiid was healthy and had played 3 or 4 years at KU (yes, that a doesn't happen anymore), he might have been considered the best to wear a Jayhawk uniform since Danny Manning (no offense to Wayne and many others). I just hope he is healthy enough to show his true potential. I know my friends in Philadelphia have been disappointed by the selection, but maybe this will be the beginning of a productive and hopefully lustrous NBA career for Joel.

If the Sixers are smart they'll treat Embiid's minutes this coming season like a pitch count for young, talented MLB pitchers. Embiid has already suffered multiple stress fractures making it likely he will suffer another. If I were GM I'd set a hard cap on his minutes per game and games total he plays. Probably sit him out of games that are played on successive nights as well.

I just hope he is healthy enough to play and does not become another Greg Oden.