It might sound simple, but a huge reason for the Kansas men's basketball team's success so far has been making close shots while allowing very few.

Hoop-Math.com's numbers list KU as the best layup/dunk/tip-in defensive team in the nation, with opponents only making 43 percent of those shots. In addition, KU leads the country by blocking 30 percent of those close tries.

On the other end, the Jayhawks have thrived at getting layups/dunks/tips, helped by strong transition play and good passing.

I wanted to dive a little further into the numbers to see just how much layups/dunks/tips are contributing to KU's success, so I went through the play-by-play of each box score to tally KU's close shots compared to its opponents. 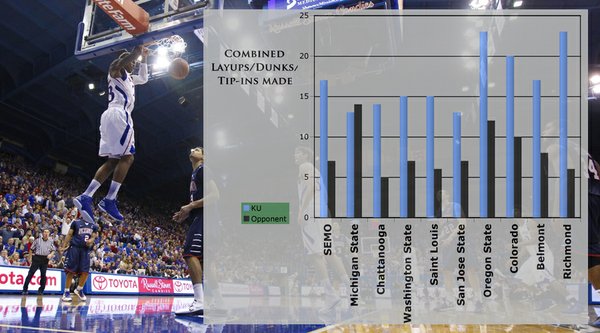 Game by game by Jesse Newell

As you can see, the Jayhawks have only been outperformed on close shots once this year, and that was during their 67-64 loss to Michigan State. KU has had double the easy baskets (or more) in nearly every other game this season.

The next graph shows how many points KU has gained each game on close shots over its opponent — a layup/dunk/tip margin if you will. 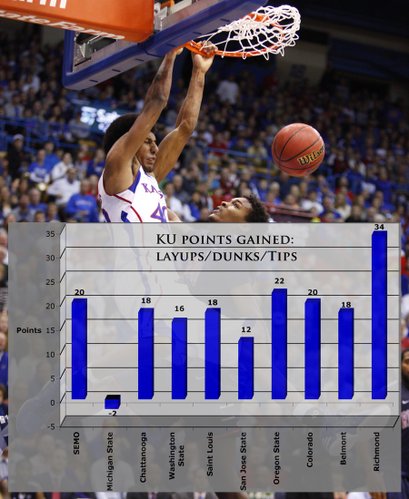 Through 10 games, KU has scored 176 more points on close shots than its opponents. That means the Jayhawks have averaged 17.6 more points per game than their opponents on layups, dunks and tips alone (For reference, KU's average margin of victory is 19.2 points.).

The Jayhawks' combined dunk and layup numbers are staggering as well (tips are excluded below). 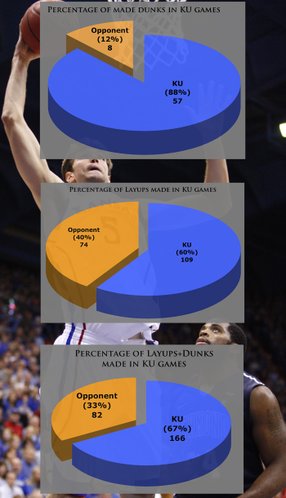 The Jayhawks are outdunking opponents, 57-8. That means Jeff Withey has more than twice the number of dunks this year as all of KU's opponents combined (20). Ben McLemore can say the same thing (17).

Withey's presence also has made dunking difficult for opponents. According to the box scores, opposing players are just 8-for-13 on dunk attempts against KU. That means teams have had a better chance of making an attempted free throw against the Jayhawks (109 of 159, 69 percent) than making an attempted dunk (eight of 13, 62 percent).

Here's a look at all the close shot combined percentages for KU and its opponents this year. (Note: Hoop-Math's numbers slightly differ from mine.)

This will be a hard advantage to sustain as the competition picks up, but right now, KU is doubling up its opponents when it comes to easy twos.

By building a team that takes lots of the highest-percentage shots in basketball while not surrendering them, KU coach Bill Self appears to have found yet another formula for success — one that makes his team the heavy favorite to win the Big 12.

Charts and Graphs! Jesse's showing off his skills now!

Very interesting revelations. I wonder how the next game will appear on these charts?

This team sure does attack the rim, on offense and defense. Take it to OSU!

Actually I have that idea written down as a future blog idea. Maybe when there's a little down time in the next couple weeks (or maybe after the year a two-year NCAA breakdown could happen).

I know it's a little dated, but the team the won it all in 08 seemed like a team that dunked and threw more lobs than any team I ever remember watching. That would be a good comparison as well.

It does seem like ku has been missing fewer dunks than in years past. T-Rob seemed to miss at least one every game...

That one-handed, alley-oop dunk from TT to TRob against Baylor in Allen was possibly the most intimidating dunk I have ever seen.

1) There have been some "misses" that don't count, meaning bad alley-oop passes that the receiver couldn't handle well enough for a dunk attempt. Even those have been few.

2) It would be nice to have figures on how many dunks were assisted. There have been quite a few beautiful plays with interior passing or drives and dishes that have resulted in wide open dunks - and therefore a very high success rate.

Don't know about dunks, but Hoop-Math tracks how many close shots are assisted. For KU, it's 54 percent. That number was 56 percent a year ago.

Jesse - Is there a different category under which you can file these? My favorite parts of the website are when you do a deep breakdown of the stats, but whatever heading these are put under don't show up on the mobile site. Which means sometimes I miss them and there's no worse fate for a kenpom following stat junky.

Not sure how the mobile site is set up, as I'm almost always on here via my laptop, but you should be able to search out articles by each individual journalist.

That being said, I do like the idea of "stat" or "numbers" tab somewhere at the top with all these posts in them.

Oh, just noticed they do have a "Blogs" tab at the top, which is basically just Tait and Jesse's stuff.

Thanks for the feedback. I'll be sure to mention that. You're talking about the mobile site and not the app, right? One option (the one I sometimes use) with mobile is clicking the "Desktop site" button at the very bottom.

If Withey continues to play the way he has been playing for the rest of the season and is not an All-American at years end, it will be an absolute travesty of epic proportions.

Just noticed that there is a "tip-in" option on each box score that I didn't mention above. Obviously, those qualify as close shots as well.

It should mess too much with the numbers/graphs above; KU is 4-for-9 on tip-ins this year, while opponents are 0-for-3.

OK, I updated all the graphs above to reflect tip-ins. All close shots should be accounted for now.

Not coincidentally, the game we've lost we were out "dunked/layup-ed" by Michigan State.

Translation... easy baskets makes it far easier to win. Good work by the way with the graphs/stats Jesse.

Those pie charts made me hungry!

As always, very well done on the stats breakdowns, Jesse. One other thing not mentioned (directly, anyway), would be the number of dunks/layups made against KU while Withey was on the bench. With all the blowouts KU's starters have created, the KU's bench and walk-ons have benefitted with extended playing time, thus, giving the opposition more opportunities to score (and make layups/dunks) late in the game. Especially since those teams being overpowered have kept their starters in much longer than I felt was necessary. And on the final tally sheet, cutting the final margin down by 7 to 10 points. I mean, did Colorado even sub in at the very end?

Note: I usually watch other games/teams just to gauge how KU compares, but normally tune to other games, (or a movie) if those games are blowouts. So I don't really know how many other blown-out teams leave their starters in, instead of substituting in their benches. When Duke or Syracuse are winning by a huge margin, are their opponents leaving their starters in? Just seems like a good possibility of getting starters hurt (or to jack up their starters/teams stats) when a game is past the point of winning (ie. 20 or more down with a only a couple of minutes left.)