All statistics courtesy of KenPom.com and are current as of March 23.

[Ed. Note — Cool documentary-style video. It's a long video, but worth watching if you have the time.]

Though Richmond has pretty good balance offensively and defensively, its greatest strength is its ability to shoot from anywhere on the court.

Richmond’s effective field-goal percentage (which gives 1.5 times credit for three-pointers, because they’re worth 1.5 times the points) of 53.6 percent ranks 20th nationally and is especially boosted by strong three-point shooting.

The Spiders have made 39.9 percent of their threes this year (ninth nationally); their three most frequent three-point shooters all are better than 41 percent from beyond the arc. Richmond also makes each possession count, turning it over on just 16.4 percent of its possessions (11th nationally). 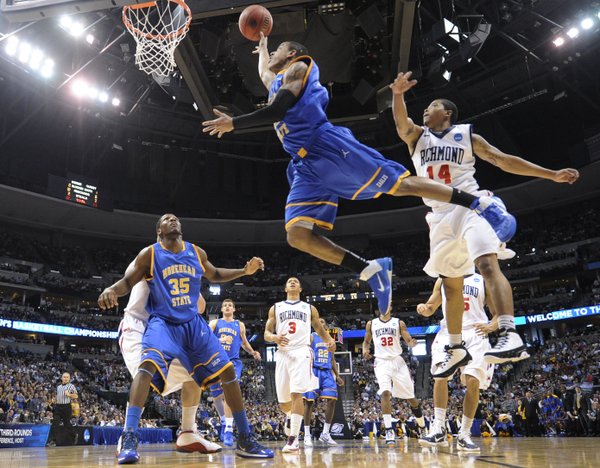 Morehead State guard Terrance Hill (11)goes up for a shot against Richmond guard Kevin Anderson (14) in the first half of a Southwest regional third round NCAA tournament college basketball game, Saturday, March 19, 2011, in Denver.

The Spiders’ effective field-goal percentage defense of 44.8 percent is 16th nationally, while its defensive free throw rate (a measure of how often a team gets to the free-throw line) of 29.7 is 33rd-best in the country.

The Spiders are a tall team, ranking 19th nationally in effective height (which takes into account the average height of its top two players on the court). They also are an older team, as their players average 2.32 years of college experience (28th nationally).

One final strength for Richmond is its pace. The Spiders play extremely slow, ranking 318th out of 345 NCAA teams in pace. In fact, in its first two games of the NCAA Tournament, Richmond had just 54 possessions each game. To put that in perspective, KU’s lowest possession total all season was 59 against Texas A&M. The lower the possessions, the better chance the Spiders have of pulling off an upset against a more talented Kansas team.

Richmond’s offense is relatively simple: Get a shot every possession, and be sure to make it. The Spiders’ biggest weaknesses come into play when they aren’t making those shots from the floor. 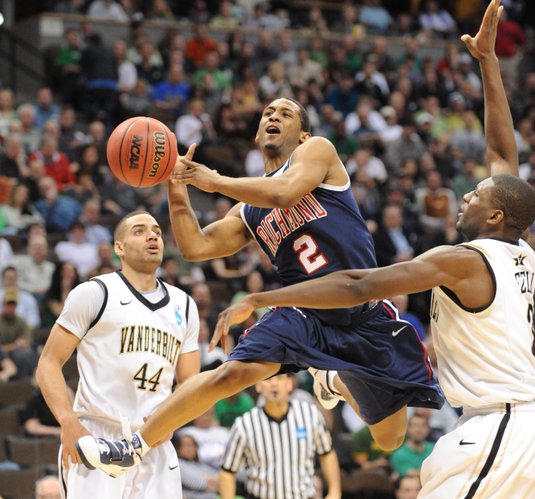 Richmond is a poor offensive rebounding team, grabbing just 28.5 percent of its misses (288th nationally). It also hardly ever gets to the free-throw line, with a free-throw rate of 32.8 — 294th-best in the NCAA.

The Spiders’ rebounding woes also are reflected in their defensive stats, as they are a slightly below average defensive rebounding team; opponents are grabbing 32.8 percent of their misses against Richmond, which is slightly above the 32.3 percent NCAA average.

Richmond doesn’t force a lot of turnovers, taking the ball away on 19.7 percent of its defensive possessions (195th nationally).

The Spiders also aren’t a deep team, as only 27.3 percent of their minutes come from their bench (253rd nationally).

Six-foot guard Kevin Anderson has received most of the headlines following a 25-point effort in the Round of 64 against Purdue, but 6-10 senior forward Justin Harper is easily Richmond’s best player.

Harper is a great shooter, making 58.5 percent of his twos and 45.2 percent of his threes (and he’s attempted 162 three-pointers). His effective field-goal percentage of 62.0 percent ranks 23rd nationally. Though the senior doesn’t get fouled much, he is a 79.3 percent free-throw shooter when he does get to the line.

Harper doesn’t turn it over often, averaging a turnover every 21.5 minutes of gametime. He’s also a presence defensively, where he blocks 4.2 percent of the opposing team’s two-pointers.

Anderson’s scoring is just behind Harper’s (16.7 points per game, compared to 17.8) but he’s not nearly as efficient. 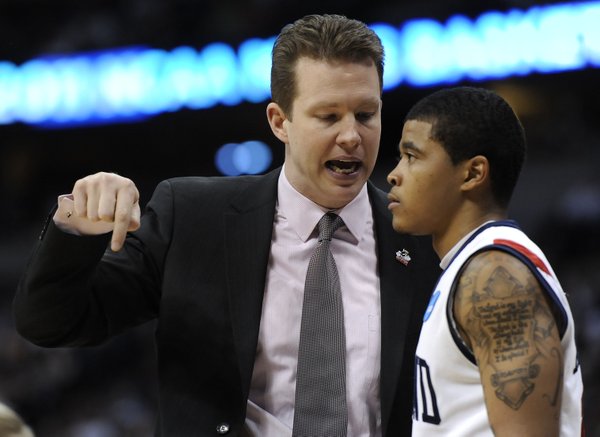 Though Anderson’s three-point shooting is impressive (71 of 168, 42.3 percent) his two-point percentage isn’t (135 of 309, 42.3 percent). The KU guard assigned to him — most likely Tyshawn Taylor — would do well to stick close to him on the perimeter to force him to drive, as his assist rate is OK but not spectacular (he’s averaging a shade over three assists per game). Anderson is definitely less dangerous inside the arc than outside it.

Also, watch for 6-5 forward Kevin Smith, who turns it over often but makes up for it by shooting well. He’s made 55.6 percent of his twos and also is Richmond’s biggest threat to get to the free-throw line, as his free-throw rate of 63.0 ranks 106th nationally.

Richmond’s KenPom rank of 37th lies exactly between two KU opponents earlier this season: Arizona (30th) and Missouri (44th). While this won’t be an easy game for KU, it is a game where the Jayhawks will be heavily favored (10-10.5 points) and one they should be expected to win.

Much like the Boston game, KU should hold a huge advantage inside against Richmond. If the Jayhawks play to that strength and dominate the glass, then there’s no reason to think that the Jayhawks won’t beat the Spiders by double digits.

If Richmond can stay close on the boards, though, it appears that, statistically, it can compete with KU in most other areas. The Spiders’ slow-tempo and three-point-jacking style also is a good formula to win as a heavy underdog.

Perhaps the most similar team KU has played this year to Richmond was Michigan (lots of threes, slow pace, zone defense), and the Jayhawks struggled in that game before coming away with an overtime victory.

I’d expect to see the Jayhawks pressing at every opportunity, trying to speed up the game and tire out the Spiders, especially with their thin bench. The same strategy helped KU in the second half against Illinois on Sunday, as the Jayhawks outscored the Illini, 17-8, in the game’s final 6 1/2 minutes.

There is a great article about Angel Morris on rivals.com.

Agree! Great article. Thank you Angel for all you do for the "Jayhawk Family." You are truly an "Angel."

Speed up with long sideline passes on O and pressing on D.

The Twins should be licking their chops right about now

Does anybody else look at the above photo and see Chris Mooney about to take a big 'ol bite out of Kevin Anderson? He's looking right at his nose, like it's a piece of pie.

The photo above that, looks less like a shot and more like jaybate's disruption stat by Vanderbilt.

Above that. The first shot? Awesome.

Kevin Anderson and Terrance Hill suspended in air. All that photo needs is 2001: A Space Odyssey theme music, super-slow motion, and maybe a monolith.

Sorry Jesse. Stats give me a headache. But you keep on, comput'n on. ;-)

Here's a strength that was left out, they have won 9 in a row, they have ole "Mo" on their side right now.

Here's a weakness of theirs that was left out. They haven't played "This" Kansas team.

They'll slow it down, pack it in, and dare us to shoot the 3. Then go down on offense and drain 3s of their own.

We can't be forced into playing their game. If we count on our 3 ball going down we'll be in trouble. Need to be patient and pound it inside. And stay with them tight on D and not foul. Rebound rebound rebound and wear them down. If it's close, pull away at the end like Illinois.

Another stength for Richmond: Not expected to win + nothing to lose, so they can continuously shoot 3's = dangerous opponent. If they're hitting their 3's, look out. Personally, I feel that if you live by the 3 you're going to die by the 3. Play the way you're capable of, Jayhawks, and you won't have any problems. Rock Chalk

Not sure what you didn't understand Chester, but Richmond is a good 3 point shooting team, and if they're really "on" with they're 3's, which I think they'll be depending on, they'll be dangerous.

our guards will hurt them. we don't need 3's shoot that mid-range 11-14. I really think that folks are under-estimating our guards. There are (5) then you will see some 6-6 Mario and 6-5 Releford. That wears folks down because it doesn't allow the other team to match-up without trusting their bench.

I see Richmond in foul trouble early the twins hit close range jumpers with hands in their face thats impressive. Then once TRob is inside its rim rattling. Sorry folks but Richmond will have to play real hard. Kansas is not an easy team. They are like fighting someone with a knife. You don't know you've been cut until you walk away.

I'll say one thing. A lot of people complain about the LJW, myself included once in awhile, but I've just come from visiting the Richmond Times-Dispatch's sports section. For such a smaller city, we have a lot to appreciate here with our paper, to put it mildly.

I personally love the LJW and KUSports. One of the most comprehensive and definitive resources for all things Jayhawk basketball.

Yeah, I traditionally have railed against a few writers, rather than the whole paper. I'm an LJW fan overall. We have it pretty good for this size of a market, though, and I don't think a lot of people realize that.

This is a perfect example of how statistics can lie.

"If Richmond can stay close on the boards, though, it appears that, statistically, it can compete with KU in most other areas. The Spiders’ slow-tempo and three-point-jacking style also is a good formula to win as a heavy underdog."

They don't play teams like KU, including Vandy and Purdue. They will have to light it up against the Jayhawks and KU will have to shoot poorly for them to pull the upset.

If KU jumps out to an early lead, or even keeps it close early they should win fairly easily. If they have to dig out of a whole, they could be in trouble.

Guard our trey, and make them play helter skelter ball!

Very nicely done, Jesse. These statistical comparisons are great as a introduction to a team.