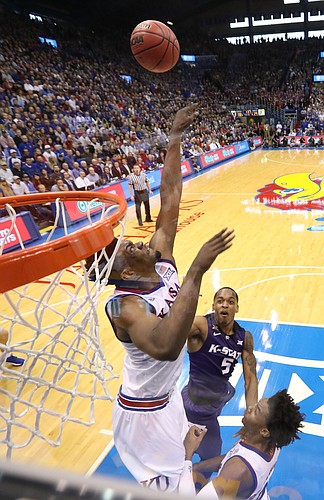 Kansas center Udoka Azubuike (35) defends against a shot from Kansas State guard Barry Brown (5) during the first half, Saturday, Jan. 13, 2018 at Allen Fieldhouse. by Nick Krug

1 - Udoka Azubuike: Showed better footwork than he ever has in a game and made a couple of nice passes on a day he totaled 18 points, eight rebounds and five blocked shots. He also was team's most effective defender against versatile Kansas State big man Dean Wade.

2 - Devonte' Graham: Picked up two quick fouls in the first half and a third with 12:38 left. K-State freshman point guard Cartier Diarra immediately pounced, repeatedly taking Graham all the way to the hoop for buckets on his way to 18 points. Graham never fouled out, but had a rough day defensively. He also scored a game-high 23 points and contributed five assists and two steals to go with five turnovers. He made 4 of 8 3-point shots.

3 - Lagerald Vick: Awakened with a strong second half in which he scored all but two of his 10 points. Had six defensive rebounds and made 2 of 3 3-pointers. KU needed a big half in a tight game to win the game and restore the junior's aggressiveness, which had been on hiatus for a few games. Broke streak of three consecutive games with single-figure points.

4 - Svi Mykhailiuk: Had a tough time defending the taller Wade (22 points) and had trouble finishing (1 of 5 2-point shots) but continued to shoot well from beyond the arc (3 of 6).

5 - Malik Newman: Returned to starting lineup with a so-so performance that ended well. Totaled seven points, four rebounds and two steals and scored the winning points from the free-throw line, where he made both with 15.2 seconds remaining.

6 - Marcus Garrett: Had a quiet 22 minutes that included two points, two rebounds and an assist.

7 - Mitch Lightfoot: Didn't have a rebound, but contributed two points and one blocked shot in four minutes.

9 - Silvio De Sousa: Played four minutes and committed one foul and one turnover. Teammates shared that he commented about the vast difference in the speed of the game as compared to at IMG Academy, where he played for three-and-a-half seasons. Learned of being cleared by the NCAA roughly 90 minutes before tipoff, according to KU coach Bill Self.

For this spoiled KU basketball fan, I am getting used to seeing us be unable to put our foot on a team's throats, get stops and shut teams down at home. This team, so far, plays completely different at home as compared to on the road. Very strange. But let's see what happens Monday night in the vortex of The Home of the Hillbillies. I would anticipate a loss, but depends how we handle the muggings in the back court and to some degree how the game is called.

Unfortunately, Sam didn't help his chances of increased usage when his 3 pt attempt was at least partially contested and early in the shot clock. IIRC, he didn't have a great defensive possession right before his 3 pt attempt either. He'll eventually learn, though it would have been nice to have it happen during the prior 380 days.