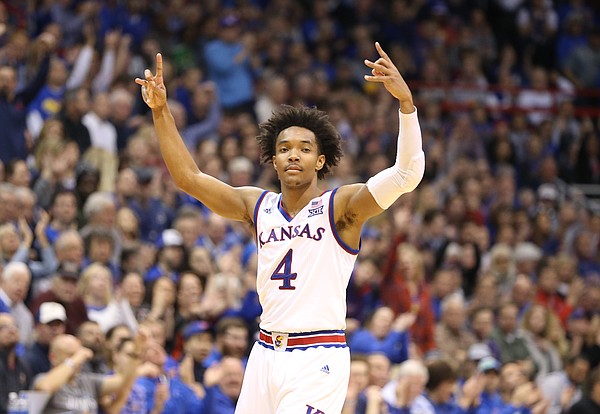 Kansas guard Devonte' Graham (4) raises up his hands after a three during the second half on Tuesday, Feb. 6, 2018 at Allen Fieldhouse. by Nick Krug

1 - Devonte’ Graham: Led team to victory with terrific 40-minute effort. Defended well, made 5 of 9 3-pointers, and totaled 24 points, six rebounds, five assists and two steals. Plays with an enthusiasm that ignites teammates and the home crowd. His positive aura will be difficult to replace once he uses up his eligibility. He has just three remaining home games, which is another way of saying he’ll play another 120 minutes in Allen Fieldhouse because to put him on the bench is to risk losing the game for making that decision. West Virginia, Oklahoma and Texas are his final three home opponents. He has had terrific games against all three opponents during his career.

2 - Udoka Azubuike: Worked hard to establish position and teammates did a nice job of setting him up for his five dunks on his way to 16 points to go with 11 rebounds and two blocks shots. It can’t be any fun guarding him. He made 4 of 7 free throws for the second game in a row.

3 - Marcus Garrett: Had a big tip for a bucket at end of the first half and finished with 10 points and two offensive boards in 15 minutes. Didn’t miss a shot, making 2 of 2 inside the arc and 2 of 2 3-pointers.

4 - Malik Newman: Made just 1 of 9 shots and missed all five of his 3-point attempts, but had one of his better play-making games. Had four of his five assists in the first half. He entered with just nine assists in 10 games. Didn’t turn it over and picked up six defensive rebounds.

5 - Mitch Lightfoot: Hustled his way to six points, four rebounds, two blocked shots and a steal in first start of his career.

6 - Lagerald Vick: Shook off bad first half at both ends off the bench to contribute 8 of 10 points in second half. Made just 3 of 9 shots and misfired on all three 3-pointers, but played aggressively enough in second half to go to the line four times and cashed in on each one. Had just one rebound.

7 - Svi Mykahiliuk: His man never left him to help out on others and Svi attempted just two shots in 36 minutes and missed them both. Score one point, and three rebounds, one assist, one turnover and one steal. 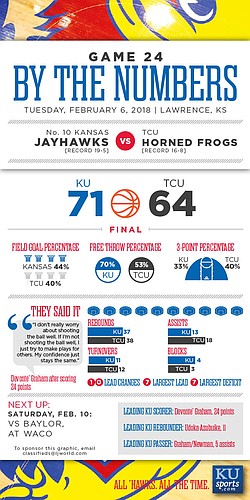 Agreed on all these rankings. However, Devonte only has 120 minutes, not 140, of remaining playing time in AFH.

Glad Malik is showing he can contribute with more than just scoring...we were lacking beyond the arc yesterday, but that defense or those assists will get more valuable as the season continues.