Frank Mason tops ratings in loss to Oregon and for season 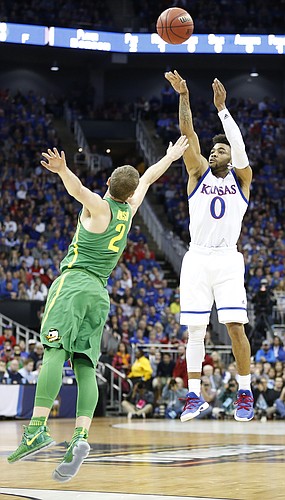 Kansas guard Frank Mason III (0) puts up a three over Oregon guard Casey Benson (2) during the first half on Saturday, March 25, 2017 at Sprint Center. by Nick Krug

1 - Frank Mason: Kansas scored 33 first-half points and Mason scored 17 of them, including points 17 through 31. He went in among the trees again, making floater after floater and 2 of 4 3-pointers. Finished with 21 points. Had at least a share of the team scoring lead in 25 of 34 games.

2 - Josh Jackson: Picked up a phantom second foul with 17:23 left in the first half, limiting him to 10 ineffective first-half minutes. Scored all 10 of his points in the final 11:23 and led the team with 12 rebounds and five assists. Had 10 points and 10 rebounds in the second half.

3 - Lagerald Vick: Gave Kansas a boost off the bench when Jackson encountered foul trouble. Had seven points and two assists in 17 first-half minutes.

6 - Devonte’ Graham: Hottest shooter on team in first three tournament games came up the coldest in season finale. Went 0 for 7 from the field and 0 for 6 from 3-point range and scored just three points.

7 - Dwight Coleby: Hung in there for four minutes and grabbed an offensive rebound in four minutes.

disappointing to say the least. mason showed up but the rest were shaking in their boots including Self Lucas got destroyed, Graham didn't show up, at least I cant blame it on Bragg this time.

We are going to miss Frankie. One tough, gutsy dude who had no quit in him. He has given a lot to the Jayhawk Nation.

I think the replay clearly showed Jackson's second foul - grabbing the arm as the Oregon player started past him. I didn't see a replay of his first foul, in part because that wasn't thought to be that big of a deal.

Frustrating end to a great team.