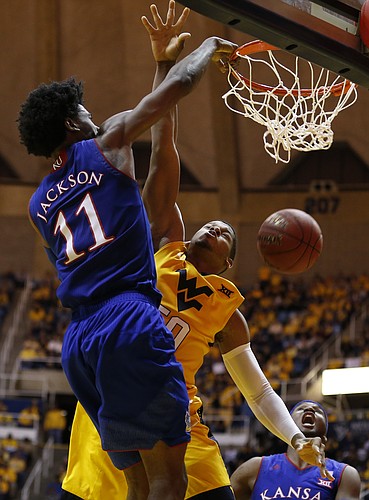 1 - Josh Jackson: It was an atypical Jackson performance in that he made 4 of 4 3-pointers and struggled defensively and on the boards (four rebounds). Did have a trademark dunk when he drove hard down the lane and threw it down hard.

“If he could jump he’d be really good,” West Virginia coach Bob Huggins said of Jackson. “He’s a great athlete. Those are the guys who play 100 games a year for 10 or 12 years. What an athlete. What a great, great athlete.”

2 - Devonte’ Graham: Yet again, he had much more impact in the first half, when he scored 13 of his 17 points. Had four turnovers.

3 - Frank Mason: West Virginia trapped him whenever he touched it and it worked. Made just 6 of 16 shots, scored 15 points and turned it over three times.

4 - Landen Lucas: Limited to 24 minutes by whistle trouble, excuse me, I meant to type “foul,” not “whistle,” honest I did. Scored just two points but had 10 rebounds.

5 - Sviatoslav Mykhailiuk: Passive defender made just 2 of 8 3-pointers, but he did a nice job of moving the ball and was not rattled. Had seven assists and one turnover.

6 - Lagerald Vick: Scored five points and had just one rebound in 15 minutes.

7 - Mitch Lightfoot: Quickly blocked a shot and grabbed an offensive rebound when he first entered but did little else during his eight minutes on the floor.

8 - Carlton Bragg: Made 1 of 4 shots, committed four fouls, turned it over, blocked one shot and had one rebound in 11 minutes.

9 - Dwight Coleby: Trillion club entry with one minute and had zeroes across the board.