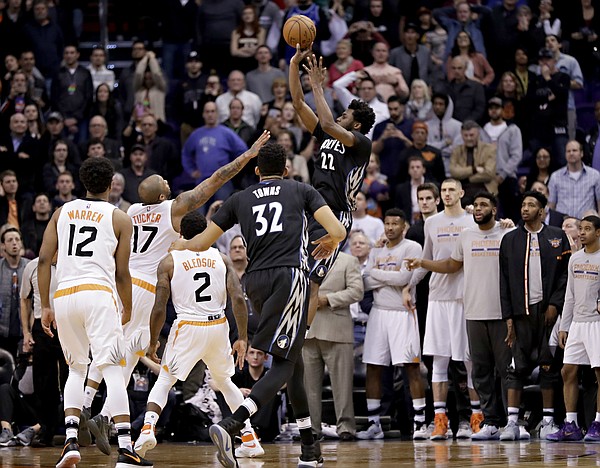 Hey, remember that guy who played basketball at Kansas with Joel Embiid a few years ago? Andrew Somethingorother, I think his name was. Canadian kid. What ever happened to him?

Oh, yeah. Andrew Wiggins. With soon-to-be Rookie of the Year and reigning Eastern Conference Player of the Week Embiid capturing the attention of the entire league, the 7-foot-2 center has overshadowed his former teammate of late in the NBA.

Well, Wiggins delivered a nice reminder of his prominence within The Association Tuesday night, capping a 31-point outing at Phoenix with a buzzer-beating, game-winning jumper.

His Timberwolves trailed by one with the fourth-quarter clock ticking toward 0:00, when Wiggins ran off a pair of picks to catch a pass from point guard Ricky Rubio on the right wing. Then, with Suns veteran P.J. Tucker checking him, the wiry third-year T’wolves wing angled for a potential drive with less than four seconds left on the clock. Wiggins went so hard on his first step (and may have drawn some contact), he nearly lost control and fell over, allowing Tucker to recover in time to force Wiggins into a low-percentage, contested fadeaway jumper. And the No. 1 overall pick in the 2014 draft drained it for a 112-111 Minnesota win.

“I was taking what the defense gave me,” Wiggins said in his postgame interview with FOX Sports North. “You know, they played up close, so I went to my one-dribble pull-up fade, and it was money.”

Following his sixth game this season with 30 or more points — Wiggins also has scored 29 on four occasions — the low key 21-year-old said he could tell he would make his 11th basket on his 22nd shot as soon as the ball left his hand.

In the final seven minutes of the game, Wiggins took over, scoring 14 points to get struggling Minnesota (17-28) a rare road victory and its third straight win.

“My shot was falling,” he said. “I felt comfortable on the court. My teammates got me the ball when I needed it. They’re making big shots, too. Everyone was together tonight.”

None by FOX Sports North

Wiggins’ coach, Tom Thibodeau, who is in his first year with the franchise, praised his players’ mental toughness following the victory, referencing Minnesota’s several losses this season in which the team has relinquished leads in the second half.

Thibodeau said the final play had three options out of the set, and Wiggins getting the ball in a spot to either drive or shoot was one of them.

“In the fourth quarter you have to have the courage to take and make,” the coach said, “and he does. And so the more he does it, the more comfortable he’s gonna get. We all have a lot of confidence in him.”

Though the coach thought Wiggins, one of his young stars, alongside Karl-Anthony Towns, might have been held in the final sequence, he liked how the former Kansas standout fought to get to “his spot” on the floor before hoisting the clutch shot.

“He had the concentration and the mental toughness to take all the stuff that happened on that play and get a good shot,” Thibodeau said. “It was a great play by him.”

None by FOX Sports North

That mid-range area on the right half of the court, as his coach referenced, is one of Wiggins’ favorites. According to stats.nba.com, he has made 18 of 35 (51%) 2-point jumpers in that zone, well above the league average of 38.9% for that portion of the floor. 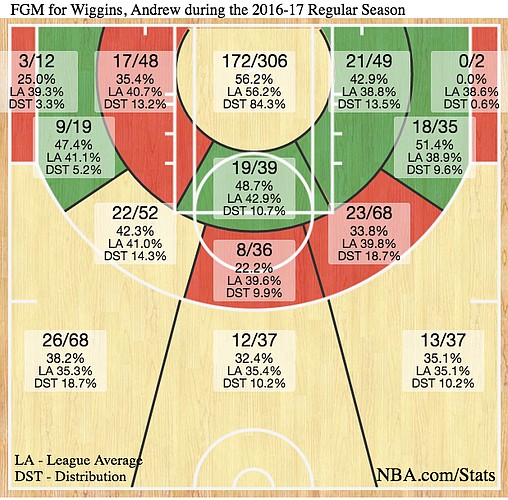 The Timberwolves, though not yet meeting preseason expectations, are only 3.5 games back of the eighth and final playoff spot in the Western Conference.

Youngest player with a buzzer-beater this season 📸 pic.twitter.com/x2hCGkPZTG