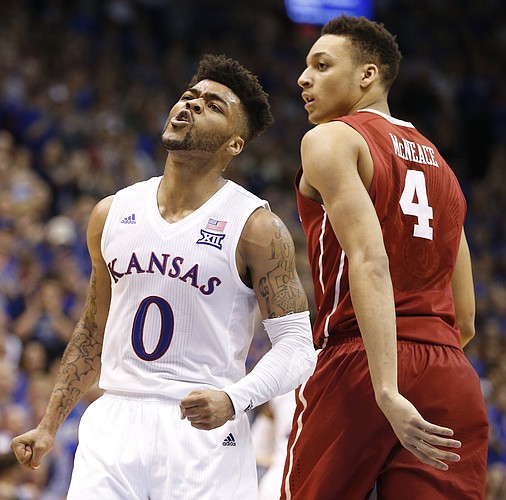 1 - Frank Mason: His final half in Allen Fieldhouse was a memorable. Rallied team to a 31-9 finish down the stretch and 15 points, five assists, one turnover and two steals in the final 20 minutes. Scored a game-high 23 points with six assists and three steals.

3 - Lagerald Vick: Some two games he had in a three-day span. Made 7 of 10 shots and all 4 3-pointers in the victories against Texas and Oklahoma. Scored 8 of 11 points in second half Monday and made two huge 3-pointers during the comeback.

4 - Landen Lucas: Didn’t miss a shot, had eight points and eight rebounds, three assists and two blocked shots. He’s carried a huge load all season and his putting strong finish on his career.

5 - Josh Jackson: Came alive late, but it was his sloppiest game of the season (eight turnovers). Even at that, he produced his seventh double-double in the past 10 games.

6 - Carlton Bragg: So tall, with long arms and a decent vertical leap, the wide-open dunk held so much promise. But much like his sophomore season, it fell short, blocked by the front of the rim, and he fell on his back. And the ball continues to slip-slide away from his hands (two turnovers). But he did hustle for five rebounds, a blocked shot and a steal in 13 minutes.

7 - Svi Mykhailiuk: While Vick was making 7 of 10 shots and 4 or 4 3-pointers in the past two games, Svi was shooting 1 for 9 and 0 for 7. Played 18 minutes vs. Oklahoma and had two points, a turnover and a steal to show for it. Did not pick up a rebound or assist.

8 - Dwight Coleby: Oklahoma’s quick big men didn’t make for as good a matchup for him as Texas’ bigger post players.

9 - Mitch Lightfoot: Didn’t get in until the final seconds.

They were there, but not with the usual name ...