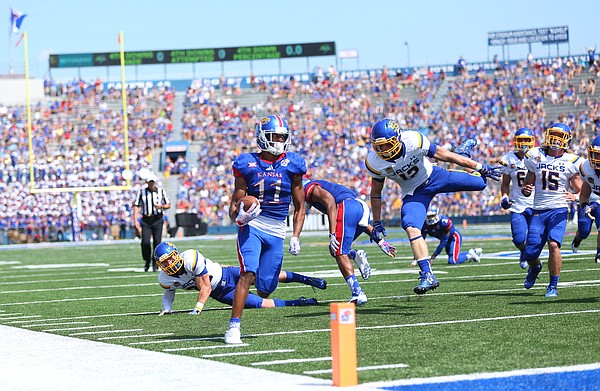 Kansas wide receiver Tre' Parmalee (11) eyes the end zone as he heads in for a touchdown during the second quarter on Saturday, Sept. 5, 2015 at Memorial Stadium. by Nick Krug

No. 1 - Tre' Parmalee: He made a 35-yard catch, which enabled KU to decline the pass interference penalty on a play in which Parmalee was virtually tackled with the ball in the air. He finished with 82 yards on three receptions and ran the ball into the end zone on a 19-yard reverse play. Also returned two punts for 25 yards, the latter giving Kansas good field position for final drive.

No. 2 - Ke’aun Kinner: Changing direction on a dime, shifting into another gear at the sight of the end zone and showing a lot of toughness for an undersized back, Kinner rushed for 157 yards and two touchdowns on 27 carries.

No. 5 - Kent Taylor: Had a big-time look to him in catching two passes for 25 yards. On receiving end of Montell Cozart’s 10-yard fade for a TD.

No. 6 - Schyler Miles: Made most of his limited time with four tackles, three of them solo. Knows how to finish.

No. 7 - Steven Sims: Threw an outstanding block and caught three passes for 15 yards. Looked good catching slightly overthrown ball in left corner of end zone but was out of bounds.

No. 8 - Montell Cozart: Since they came in a loss the three plays that will be remembered longest were the bad interception on a telegraphed pass in the flat, his fumble, and the botched final snap that prevented a shot at a field goal that could have forced overtime. But overall, Cozart showed more accuracy, better pocket awareness and more courage running the football. Still would benefit him to take advantage of openings in front of him and run even more often, but that likely will come with film study. Completed 25 of 38 passes for 291 yards and a touchdown. Rushed for 94 yards on 17 carries. Cozart completed passes to 10 different receivers.

9 - Joe Dineen: Rocked quarterback Zach Lujan so hard that it knocked the helmet off Lujan’s head.

I noticed none of our corners did not make the Keegan meter. Wonder why?

Tom is dead wrong on the Cozart interception. It had nothing to do with telegraphing. KU had three receivers against two defenders. Both receivers that were supposed to block the guy ran right past the first guy to go get the corner. If they make the block they were supposed to make, even if they half-assed the block, the ball is not intercepted. Blame the receivers, not the QB. Cozart and the offense played well. Bowen and the defense were awful.

good grief Michael, did you watch the replay? The guys had long missed any possible block on the LB that jumped the rout when Cozart made the pass. Blame the guys first for missing their blocks but Cozart should very easily have seen the LB and never make the pass.

I have to agree with Suzi. Cozart had plenty of time to recognize the play broke down and to just throw it away. I believe I had read it on here yesterday that Cozart was looking over to the sidelines to see where to throw the ball. I understand if this is true but at some point that leash has to be loosened and let Cozart go through his progressions. I think our WR's and QB played better than expected. This is going to take some time to right this ship but I'm on board.

And you are dead wrong for blaming Bowen for the Defense. We are so severely under-manned and lack experience at every position. Bowen does the best with what he has. He only allowed 10 points in the second half, after his guys settled in. So don't you dare point a finger at Bowen.

You are right about the severely undermanned defense but we Bowen should have called for a blitz when SDSU was driving for the final TD.

Maybe we should schedule a polo game, with half our players dismounted?

Max can't tackle; can't cover, and totally wrong defense scheme. So whom else do you blame? Our Defense has enough talent to do much better!