Joe Dineen stands out in rout 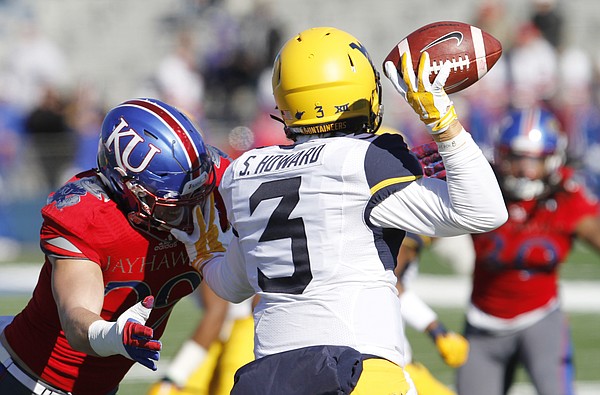 No. 1 - Joe Dineen: Never gets discouraged and never stops playing rugged football. Made 16 tackles, all solo, one for a loss. Added a pass breakup and a quarterback hurry.

No. 2 - Derrick Neal: Converted from receiver to cornerback in midseason, he showed nice skill for playing the ball and had two pass breakups in the end zone and an interception.

No. 3 - Michael Glatczak: Had his first career interception and returned it 15 yards. Also had six tackles.

No. 6 - Marcquis Roberts: Had seven tackles.

No. 7 - Kent Taylor: Freed himself and caught the pass for KU’s longest play from scrimmage, a 27-yard gain.

No. 8 - Matthew Wyman: New to punting, Wyman spent a good portion of the half-time break working with special teams coach Gary Hyman on catching simulated snaps. Caught all snaps cleanly and averaged 40.6 yards on 12 punts. Has had no shortage game reps to refine his new skill.

No. 9 - Ryan Schadler: Showed sprinter’s speed in returning a kickoff 30 yards, a play that was one of the afternoon’s brighter flickers of hope for Kansas. Hyman was big-time fired up by it.

I think the last wr converted to DB is on an NFL roster, even if he is injured.