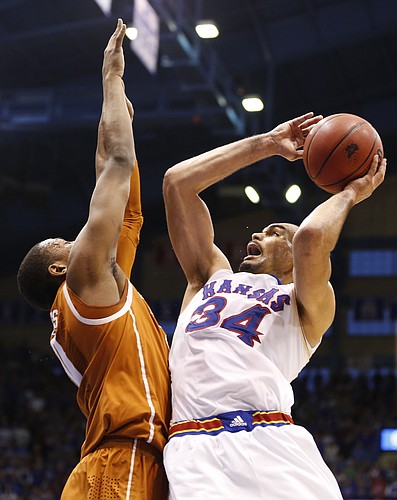 Kansas forward Perry Ellis hangs for a shot over Texas forward Jonathan Holmes during the second half on Saturday, Feb. 28, 2015 at Allen Fieldhouse. by Nick Krug

1 - Perry Ellis: In three games since missing a shot at the rim that would have been a game-winner at West Virginia, Ellis has scored 23, 24 and 28 points. He was at his very best Saturday with 13 rebounds and three blocked shots. Ellis has become so aggressive of late, attacking off the dribble, throwing down dunks with authority and making it clear who the best player on the court is. He’s played himself into position to win Big 12 Player of the Year honors and he’s done it without a scoring threat playing opposite him in the post.

2 - Kelly Oubre Jr.: Has scored 14 points or more in four of his past five games and has averaged 6.6 rebounds in that stretch. He definitely has learned to use his perfect basketball body and athleticism to make things happen near the rim at the both ends. With Cliff Alexander, the team’s best defensive rebounder, sidelined, Oubre grabbed nine defensive boards.

3 - Frank Mason III: Isaiah Taylor is a tough point guard to guard and even though Mason couldn’t keep him out of the paint (nobody can), he made him work hard, pestering him relentlessly. Mason also made sure Kansas didn’t play sloppy. He had just one turnover in 39 minutes to go with 12 points, four rebounds and three assists.

4 - Landen Lucas: Had five points and four rebounds in 25 minutes.

5 - Wayne Selden Jr.: Still not finishing at the hoop. He made just 1 of 7 shots, but he did a good job of drawing fouls on wild drives to the hoop and made 5 of 6 free throws. Had a big blocked shot in the second half and two steals to go with seven points and three rebounds in 30 minutes.

6 - Jamari Traylor: Had two rebounds and a blocked shot in 11 scoreless minutes.

7 - Brannen Greene:  Had a three-pointer from the left corner blocked and once missed an open Ellis on the fast break. Had two points an assist and a rebound in 11 minutes. With defenses more mindful of not losing sight of him, Greene has rushed some shots and has made 2 of 14 three-pointers in the past five games.

9 - Devonté Graham:  Whistled for two fouls in seven minutes and missed the only shot he took.

No one has been running away with the award this year, though Heald from OU was probably in the lead through the first half. It could come down to that final game. If Perry puts up 20's again this week, and we win the league outright, then it is his. If OU sneaks in a shared, Buddy might just sneak off with POTY.

Coach Self would deserve a lot of the credit for reinventing how the O is run and how he uses Perry. So much different the last half of the season with getting him out in space, being involved in initiating the offense from the top of the key instead of pounding him down low, and then continuing to push him to be way more aggressive than Perry is naturally comfortable being. Great Job by both.

I know it is late, but we need to get Svi ready... he can be very good (and useful) in the tournament.

Getting him (Svi) ready would translate to playing more minutes; I can't think where those minutes would come from without a negative affect on team performance. Having our schedule back loaded with WVU, UT, OkU just doesn't leave much room for futzing around with different lineups.

Ashwin is right. At some point in the Dance we're going to need him and he won't be ready because of lack of playing time. He might be KUs second best passer so he should be finding minutes when either Mason or Graham aren't on the court.