Bill Self underrated in one area as coach 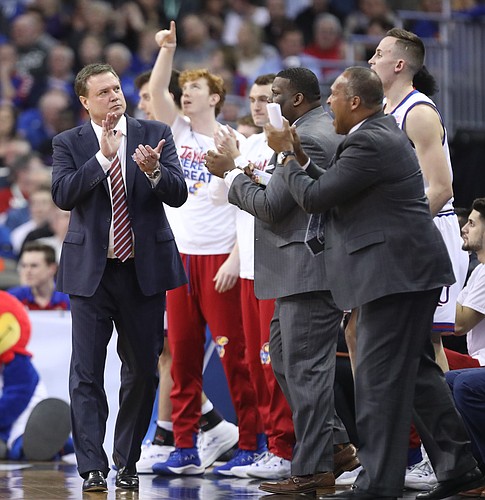 Kansas head coach Bill Self applauds the play of his team during the first half, Friday, March 23, 2018 at CenturyLink Center in Omaha, Neb. by Nick Krug

Freshman guards Quentin Grimes and Devon Dotson, an athletic duo of McDonald’s All-Americans, are known as better scorers than pure shooters, so they might not put up great 3-point shooting numbers this season.

That doesn’t mean they won’t leave Kansas as better shooters, depending on how long they decide to stay. (Guards who project as points in the NBA generally don’t enter as quickly as big men).

“I would rather recruit a shooter than a scorer, to be honest with you,” Kansas Bill Self said last week at media day. “You can kind of teach a shooter how to score, but sometimes it's hard to teach a scorer how to shoot. I do think that my assistants do a great job with our guys in that area, as far as shooting the ball.”

Kurtis Townsend works on the technical aspects of shooting with players, getting them to stop drifting and to tuck their shooting elbows, etc.

And the way Self coaches nurtures the confidence of shooters. He talks them up and is more likely to pull them for a defensive lapse or for not keeping the ball moving, letting it “stick” as the coach likes to say, than for missing an open shot.

“I do feel like that when they play here, they have confidence to make shots because, in large part, that's not something that we emphasize,” Self said. “I firmly believe it's a good or a bad shot when it leaves your hand, not when it goes in or not. If you have that mindset, you should always be somewhat confident. We know you have to make shots to win games; certainly, to win big games, but I don't want those guys to have the pressure that you have to shoot well to play well."

Shooting percentages on 3-pointers tend to improve throughout players’ careers because they come to understand what a good shot is and because they grow stronger and because their technique is monitored by the coaching staff.

By Self preaching sharing the ball, keeping the ball moving rapidly and making the extra pass, the coach gets the intended result: a high percentage of high-percentage shots. The purpose of moving the ball rapidly is to reach the point where the shifting defense can’t keep up and Self wants the one with the ball in his hands when the defense has failed to keep up to be the one to take the shot.

In Self’s mind, if it’s an open shot from a player who is where he is supposed to be, then it’s a good shot. If it misses, it’s still a good shot that should have been taken. It’s definitely a system that nurtures a shooter’s confidence, an underrated aspect of Self’s coaching success. Self justifiably receives a lot of credit for getting his players to play unselfishly, exert a ton of effort defensively and play with a great deal of toughness.

The 16th-year coach probably doesn’t get enough kudos for creating a good environment for growing a shooter’s confidence.

Garrett still worries me. His freshman stats is below 30% while Graham is beyond 40% with less attempts in his 1st yr. Garrett's case was confidence, but without proper 3pt technique. Hopefully, what you said is true. Then we will see Garrett improve his 3pt mechanic and expect to see him shooting at least 40%, since he's left open most of the time. Would coach let Mitch take 3pt? He's a good shooter, with confidence, too. Him and Dedric will be our prominent 3pt contributors, along with guards this season.