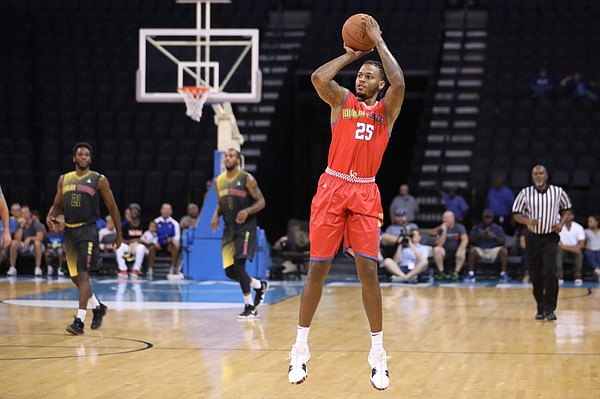 Kansas Alumni guard Brandon Rush pulls up for a three during the first half of a charity scrimmage on Saturday, July 28, 2018 at Silverstein Eye Centers Arena in Independence, Mo. by Nick Krug

As Kevin Durant and Stephen Curry were shooting the Golden State Warriors to their third NBA title in four seasons, retired voice of the Jayhawks Bob Davis reminded me that Brandon Rush guarded both of the NBA superstars.

“I tried not to let him get any air space,” Rush said of his approach against Curry. “The way he plays now, he can create so much space for himself. Nobody can do that like that guy.”

Durant scored 32 and 37 points against Kansas in his lone season at Texas. In the first game, he was making shot after shot, with Rush guarding him tightly.

“Just like he does now,” Rush said. “He got better, too. And it helps when you have four guys who know how to play and know where you want the ball. He’s having a good time out in the Bay. I’m happy for him.”

Rush last played an NBA game in 2016-17. He signed a 10-day contract with Portland in February, but never played in a game for the Trailblazers.

He said he wants to catch on with a team this coming season.

“Everybody doesn’t know I was really ill for a while,” he said. “I was sick. I had to be hospitalized for a while. I had a heart infection. It was crazy. I’m all better now.”

Rush has worked his way back into shape and has a shot to catch on with a roster because he’s a popular teammate, doesn’t rock the boat and is a good long-range shooter. His career 3-point percentage is .402.

Rush, 33, also moves his feet so well for someone with his length that he can defend multiple positions. He said he has had to guard LeBron James “plenty of times.”

James is not the toughest player in the NBA for him to guard, though, Rush said. Instead, he cited two Portland guards from smaller college basketball programs as the toughest assignments for him.

“I would say C.J. McCollum and Damian Lillard,” Rush said. “Those two are tough to guard.”

So sorry to hear about Brandon's heart issue, and so glad he's doing better now. Best of luck to him on continuing his NBA career, and as a Warriors fan I hope he ends up here again.