Getting to know: USC basketball, Round 2 NCAA Tournament 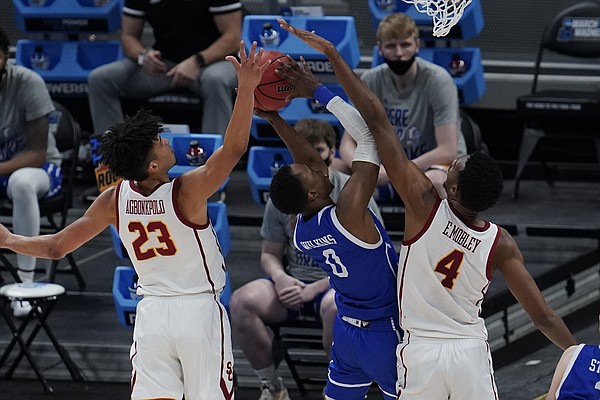 USC forward Max Agbonkpolo (23) and Evan Mobley (4) defend Drake guard D.J. Wilkins (0) during the second half of a men's college basketball game in the first round of the NCAA tournament at Bankers Life Fieldhouse in Indianapolis, Saturday, March 20, 2021. (AP Photo/Paul Sancya)

This isn’t your typical second-round matchup, when third-seeded Kansas faces six-seeded USC tonight for a spot in the Sweet 16.

For one, the Trojans are actually favored even though they are the lower seed. The spread is -1.5 in USC’s direction, while KenPom gives Kansas a 41% chance of victory in this one. His model projects a 68-65 win for the Trojans.

It all means the Jayhawks, who consistently make it past the first weekend in March, are a slight underdog in this matchup. That has a lot to do with KU’s roster situation because of COVID-19 issues, but USC is also very capable in its own right.

The Trojans (23-7) have won four of their last five entering this matchup, including a 72-56 victory over Drake in the opening round of the NCAA Tournament. Tonight’s game inside Hinkle Fieldhouse will begin at 8:40 p.m. and be televised on CBS.

Even with a complete roster, the Jayhawks would have their hands full with the 7-foot, 215-pound freshman forward.

Mobley, who is the first-ever No. 1-ranked recruit to sign with USC, is a dominant scorer and excellent defender in the post. He leads the Trojans with an average of 16.8 points per game, while also pacing the team with 8.7 rebounds per outing.

On defense, Mobley produces a team-high 3.0 blocks per outing. He’s averaging 34.1 minutes per game, shooting 57.9% from the floor. Per KenPom, Mobley’s block rate of 9.2% is the 31st-best clip in the nation.

This will be the second set of brothers that KU has to face, as Evan has an older brother, Isaiah, who is a sophomore on the USC basketball team. Evan Mobley is coming off a 17-point, 11-rebound performance against Drake.

Eaddy enters tonight’s matchup as one of three players to average in double figures for the Trojans.

So far this season, Eaddy is second on the squad in scoring with an average of 13.5 points per game. He’s also leading the team with 2.8 assists per outing. Eaddy is shooting 44.6% from the floor, including 38.6% from long range.

The game against Drake, in which he scored 9 points, was the first time Eaddy didn’t reach double figures since Feb. 27. Per KenPom, Eaddy plays 79.4% of his team’s minutes and has an offensive rating of 116.7.

Eaddy began his career at Southeast Missouri State before transferring to Santa Clara.

Coming in at third on the team in scoring is Peterson.

The junior guard is averaging exactly 10.0 points per game while shooting 42.7% from the floor. He’s also knocking down 37.3% of his 3-point baskets. In addition, Peterson is averaging 4.9 rebounds and 2.8 assists per outing entering tonight.

Last time out, Peterson poured in 14 points for the Trojans in their win over Drake. He’s reached double figures in four of his last five games.

ONE THING USC DOES WELL

Given their length across the board, the Trojans naturally fare well in 2-point defense. They allow teams to shoot 41.7% on 2-point shots, which is ranked No. 2 in the nation and about 8% better than the national average.

If the game comes down to free throws, USC could be in trouble. The Trojans are shooting 64.5% from the free throw line this year. That number ranks 328th in the country and is about 7% below the average clip for a DI basketball team.

The Trojans are coached by Andy Enfield, who is 155-109 in his eighth season at USC.

USC is only a slight favorite in this one, favored by a 1.5-point margin, but it is telling on the expectations for this game. It just seems difficult to predict a KU victory in this case.

There is no guarantee that David McCormack can have a similar role to the one he had two days ago, especially with a tougher matchup. And just because McCormack had a gutsy performance in his return, that doesn’t mean Jalen Wilson will do the same.

So I’m taking USC. It wouldn’t completely shock me if KU pulls this out, but I’m just not predicting it. It should be a good game either way.

I live in Southern California. One of my best friends is a USC alum and definitely a big fan of all things "SC." He confirmed what I read elsewhere, that Evan Mobley, at 7' 0" has a 7' 4" wingspan.

Is less than 17 ppg really “dominant”? Obviously it’s good, but the commentary and the facts/stats just don’t seem to match.

The kenppm prediction has nothing to do with the tests.