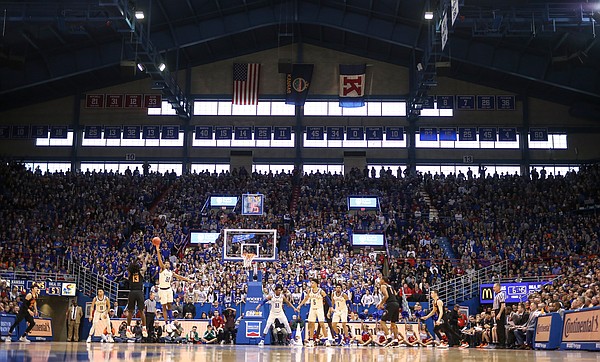 Kansas guard Ochai Agbaji (30) comes out to defend against a three from Oklahoma State guard Isaac Likekele (13) during the second half, Saturday, Feb. 9, 2019 at Allen Fieldhouse. by Nick Krug

No. 6 Kansas is back on the road Tuesday when it travels to Stillwater, Oklahoma to take on Oklahoma State inside Gallagher-Iba Arena.

This conference clash will begin at 7 p.m. and will be broadcasted on Big 12 Now over on ESPN+.

The Jayhawks would break a league record of consecutive road conference victories with a win tonight. Kansas has won 11 in a row away from home against league opponents, a stretch that matches its previous record.

Oklahoma State (8-3, 2-3 Big 12), on the other hand, is coming off a 70-54 road win over Kansas State on Saturday. OSU connected on its final 13 shots to ultimately finish off Kansas State for its second league win of the season.

KenPom gives Kansas a 56% chance of victory tonight. His model projects KU to earn a 72-71 win in Stillwater.

The scouting report on Oklahoma State has to start with Cade Cunningham, who is currently projected to be the No. 1 overall pick in the 2021 NBA Draft.

So far in 11 games at the collegiate level, Cunningham has been as advertised. He’s averaged 17.4 points per game to lead the way for OSU, while also posting an average of 6.1 rebounds and 3.8 assists per contest. Cunningham is averaging 33.4 minutes per outing.

Cunningham can get to the rim with ease, and he’s a phenomenal passer. Cunningham’s best performance so far was when he poured in 29 points on Oral Roberts. It was the most by an OSU player since Jawun Evans scored 30 against UNC in the Maui Invitational on Nov. 22, 2016.

Cunningham was the 2020 Naismith High School Player of the Year in his final prep season.

The Cowboys only have two players averaging in double figures in scoring and Isaac Likekele is one of them.

In addition, Likekele takes efficient shots. He’s first in the league with a 59.6% field goal percentage. He was an honorable mention All-Big 12 selection as a sophomore last season, but he has taken a big leap this year.

There is plenty of balance for the Cowboys after their top-two players, so let’s highlight Bryce Williams because of his defensive play.

Williams is averaging 1.4 steals per game, which ranks 11th in the Big 12. He’s a pesky defender that should create problems for members of KU’s backcourt tonight. Because of his defensive play, Williams is among the OSU leaders in plus/minus per 40 minutes with a mark of +8.3.

The Cowboys in general have had a solid defense. They force 14.4 turnover per game and are holding opponents to a 39.8% field goal percentage from the floor.

ONE THING OSU DOES WELL

The Cowboys do a good job of crashing the glass. They have a 32.2% offensive rebound rate, which ranks 67th in the nation.

Oklahoma State is not a great 3-point shooting team, to say the least. The Cowboys are hitting 31.6% of their shots from long range, which ranks 232nd in the nation.

The Cowboys are coached by Mike Boynton Jr., who is 59-52 in his fourth season at OSU.

According to FanDuel’s Sportsbook, Kansas is considered a 3.5-point favorite over Oklahoma State as of Tuesday morning. I know KenPom has this closer, but I’m going to lay the points in this one. Jalen Wilson didn’t have his best game on Saturday, and a strong bounce back by him should lead to more of a comfortable win for KU.