Getting to know: Villanova basketball 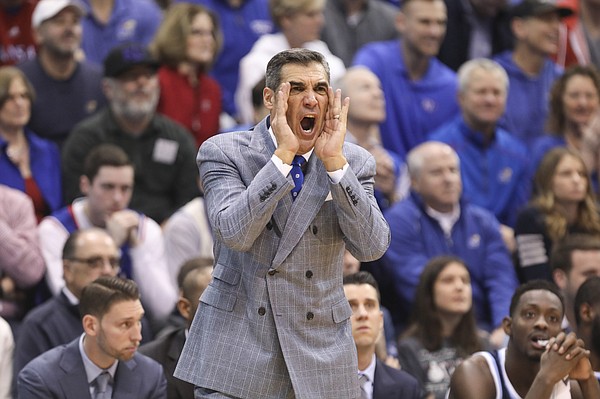 Villanova head coach Jay Wright yells at his team during the first half, Saturday, Dec. 15, 2018 at Allen Fieldhouse. by Nick Krug

Now that Kansas is No. 1 in the nation, it is time for the team’s first true road test of the year.

The Jayhawks, who are ranked No. 1 in the latest AP poll, will travel to No. 18 Villanova Saturday morning. They will then have a road tilt at Stanford next weekend, meaning it will be a tough stretch for the Jayhawks with conference play right around the corner.

Villanova (8-2) has won four games in a row since an 87-78 loss to Baylor on a neutral court. The Wildcats also suffered a 76-51 loss at Ohio State in the second game of the season. Kansas, meanwhile, is now 9-1 on the year after winning nine consecutive games.

"Kansas presents so many problems," Villanova head coach Jay Wright said in a team release. "Obviously they are a great offensive team that averages 85 points a game. They're great in transition, have size and can really spread you out. Plus they're a great defensive team.”

The KU-Villanova series is tied at 4-4. This will be the third meeting since March of 2018, with KU winning last season by a 74-71 margin in Lawrence.

Bey has been on another level in December.

Last year, Bey made an immediate impact at Villanova and was named to the All-Freshman team in the BIG EAST. He averaged 8.2 points, 5.1 rebounds and 29.6 minutes per game in his rookie campaign.

As one of four players averaging in double figures for Villanova, Gillespie is an important part of the team’s success.

This year, the guard is posting a scoring clip of 14.4 points per contest to rank second on the team. He is shooting 41.3% from the floor, while leading Villanova with 21 made 3-pointers through 10 games.

In addition, Gillespie scored 20 points in the Wildcats’ 78- 66 victory over Saint Joseph’s on Dec. 7.

A former KU target could be primed for a big showing this weekend.

Robinson-Earl was a Bishop Miege standout before electing to play his final season of prep basketball at IMG Academy in Florida, and then he ultimately picked Villanova over the Jayhawks in October of 2018.

This season, he is averaging a double-double during the first 10 games of his college career with a clip of 12 points and 10 rebounds per contest.

Moore has become familiar with the BIG EAST Freshman of the Week award.

He earned the honor after he scored 16 points and added three assists in Villanova’s 78-70 victory over Delaware last Saturday at the Never Forget Tribute Classic. Moore has earned the honor for the third straight week, and his the first player to do so since 2009-10 when Dane Miller of Rutgers accomplished that feat.

For the year, Moore is averaging 12.6 points per outing.

ONE THING VILLANOVA IS GOOD AT

As usual, Villanova can shoot the ball. The Wildcats rank 13th in effective field goal percentage with a mark of 56.6%, per KenPom. They are 31st in 3-point percentage, hitting 38.1% of their shots from downtown.

ONE THING VILLANOVA IS BAD AT

Villanova’s struggles on defense have been noticeable. The Wildcats’ defense ranks 256th in 3-point percentage (35.1%) and 226th in effective field goal rate (50.7%) thus far this season.

Kansas is a 1.5-point favorite on most sportsbooks entering its first true road test of the year. These matchups are always tricky, with winter break and the holidays just around the corner. It is also a morning game on the road, so that doesn't necessarily help. Despite all of that, I trust KU’s defense to travel and I’m laying the points.