Getting to know: Kansas City basketball 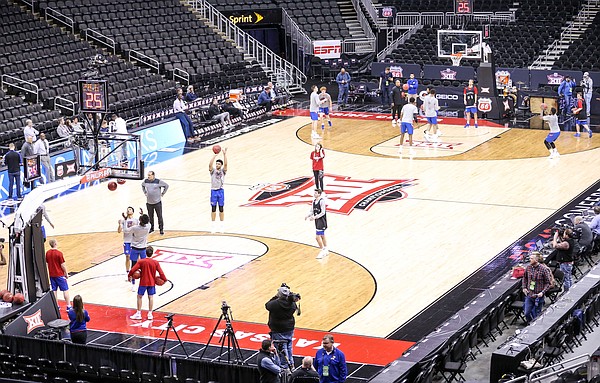 The Kansas Jayhawks shoot around during an open practice on Wednesday, March 13, 2019 at Sprint Center. by Nick Krug

Not only would it extend KU’s win streak to nine games, but it could mean a No. 1 ranking entering next week. Fortunately for the Jayhawks, they should have a pretty good shot of taking care of what they can control during today’s nonconference tilt in the Sprint Center.

UMKC, which is now known as Kansas City, enters this matchup with a 5-6 clip after dropping two games in a row. Over the last two outings, Kansas City has lost by a combined 27 points to Iowa State and McNeese State.

According to KenPom, the Roos are the 260th-ranked men’s basketball team in the country. For comparison, Kansas comes in at No. 5 in the same rankings. KenPom gives the Jayhawks a 98% chance of winning this game, with a projected score of 78-57.

Kansas is 7-0 all-time against Kansas City, including 2-0 in Kansas City meetings, 1-0 in Sprint Center.

Tipoff is slated for 4 p.m.

It won’t take long to figure out who is Kansas City’s top producer so far this season.

White is the only player in the Western Athletic Conference (WAC) to lead his respective team in four statistical categories. White leads the Roos in scoring (12.0), rebounding (7.5), steals (1.4) and blocks (0.9). He has been the leading rebounder in seven games and been a high scorer in two games.

In 2018-19, White played his lone season for Clemson after transferring from Oral Roberts. With the Tigers, White played in 31 games and had 10 different games with at least 10 minutes of action. He ended his ORU career averaging 7.7 points and 6.8 rebounds per game.

Earlier this week, Giles achieved a milestone for Kansas City.

Giles played in his 100th career game at McNeese State on Tuesday. He is the only active player suiting up as a Roo all four years. In his career, Giles has started 55 times while averaging 6.9 points and 2.7 rebounds per game.

The milestones don't stop there, however. If Giles appears in 10 more games, he would enter in the top-10 list for most games played at Kansas City.

Hardnett has made an immediate impact in his lone season with the Roos.

This season, Hardnett is tied for first on the team in assists with 25 to go along with his average of 8.1 points per game. He is coming off a team-high 16 points in Tuesday’s loss to McNeese State. Hardnett — along with White — are the only two players to have started all 11 games for Kansas City this year.

In his two seasons at BYU, Hardnett started 47 of the 55 games he played in. He averaged 7.4 points and 1.9 assists per game, shooting 44.2% from the floor. Hardnett had 15 games where he finished in double figures.

The Roos are coached by Billy Donlon who is 5-6 in his first season at Kansas City and 114-100 in his eighth season overall.

ONE THING KANSAS CITY IS GOOD AT

Kansas City has had active hands so far this year, posting a steal rate of 11.1% on the defensive end. Only 66 teams in college basketball have recorded a better clip than that.

ONE THING KANSAS CITY IS BAD AT

The Roos could get blocked a few times today, considering their performance in that area thus far. Opposing teams have posted a block rate of 14.9% against Kansas City, which ranks 350th in all of college basketball.

Kansas is a 23-point favorite over Kansas City as of Saturday morning. Kansas coach Bill Self admitted this week that his team hasn’t fared well in nonconference action in the Sprint Center, which makes it scary to lay this big of a number. But I think the Jayhawks know what is at stake with a win, and a lopsided one at that. I’m picking Kansas to cover the big number.