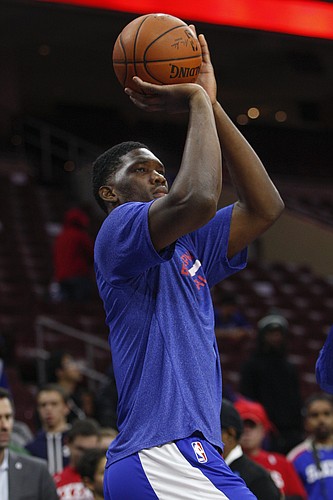 Philadelphia 76ers' Joel Embiid of Cameroon shoots the ball prior to the first half of an NBA basketball game against the Brooklyn Nets, Wednesday, Nov. 26, 2014, in Philadelphia. The Nets won 99-91. (AP Photo/Chris Szagola)

Almost a year ago, coveted 7-foot NBA prospect Joel Embiid fractured a bone in his right foot. Proceeding with caution, Philadelphia elected to bring the promising young Cameroonian along slowly in the rehab process, ultimately deciding to keep him out for the entirety of what would have been his rookie season.

Over the weekend, the franchise that took a chance on the young center out of Kansas with the No. 3 overall pick in the 2014 draft revealed that foot hasn’t healed as much as anticipated.

As bad as that bit of news sounded for Embiid and the 76ers, it got worse Monday when The Philadelphia Inquirer’s Keith Pompey reported the injured big man might not be available when the season begins in a little more than four months. What’s more, “a legitimate chance” exists that he could miss the entire 2015-16 season.

Could Joel Embiid sit out another season? It's possible http://t.co/XnDOGMqcK4 via @phillysport

The upcoming NBA Summer League figured to mark Embiid’s unofficial professional debut, but now he isn’t expected to participate in any of the July exhibitions. The Sixers, Pompey reported, still are trying to figure out Embiid’s next step, and nothing — including surgery — has been ruled out.

The future didn’t seem so dire, though, in one third-hand account of the center’s situation. On Monday afternoon, Bill Self told reporters KU assistant coach Norm Roberts spoke with Embiid on the phone this past weekend and the injury-plagued big told his former college assistant “he hasn’t re-injured anything.”

“Basically, he’s been working out and everything, and the doctor told him — based on doing the MRIs or X-rays or whatever they do… even though it feels better, it doesn’t look like it’s made the progress they would hope at this stage, so they were gonna slow him down,” Self related. “But by no means, from what Jo has told us, 'slow down' does not mean major setback. It means they’re gonna give it a little bit more time to heal before they put him in stressful situations.”

The Inquirer reported Embiid hadn’t quite reached the portion of his rehab that allowed him to play five-on-five, but the Sixers had claimed his rehab process was moving along on schedule before the unexpected news release about his recovery this past weekend.

It appears the organization is prepared to keep Embiid out as long as necessary. General manager Sam Hinkie knew when he drafted the 7-footer, despite the pivot’s arsenal of skills, risks could accompany Embiid to the NBA. The GM doesn’t want to wreck his investment just to get him in a Philadelphia uniform more quickly.

"Our priority remains providing Joel with every opportunity to ensure he has a long and successful NBA career," Hinkie said Saturday.

"They were hoping he was a franchise player. If he's not a franchise player, their whole plan is gone,” the source told The Inquirer. “If Embiid can't play or if he can't reach a superstar level, their plan is really in trouble."

Late in another losing-filled season (the Sixers finished 18-64 and secured the No. 3 overall pick in the 2015 NBA Draft), Philadelphia slowly began building the hype for Embiid’s debut, but now no one is sure when exactly that day will come.

Think our friends over at r/Sixers on @reddit are excited to see JoJo play? pic.twitter.com/Y2i0JbGas5

Oozing with potential but handcuffed by injuries, Embiid hasn’t played in a game since March 1, 2014, when he re-injured his back in a road loss at Oklahoma State. Whatever the timetable for his return turns out to be, the 21-year-old big man (who, as of Monday afternoon, had maintained social media silence on the matter) has to be looking forward to feeling like a basketball player again.

A post shared by Joel "The Process" Embiid (@joelembiid)