Jesse Newell: Welcome back to the GameDay Cram Session, as Kansas is taking on Towson in its season-opener Friday at Allen Fieldhouse.

Tom, what has impressed you most about Naadir Tharpe in his first two games? 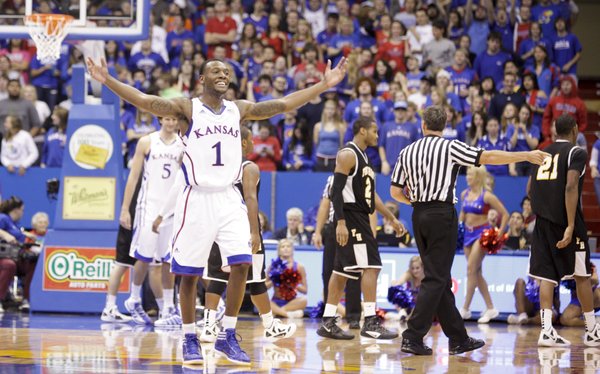 Kansas guard Naadir Tharpe raises up the Fieldhouse during a run by the Jayhawks against Fort Hays State during the second half on Tuesday, Nov. 8, 2011 at Allen Fieldhouse. by Nick Krug

Tom Keegan: What hasn't? I guess his confidence and his outside shot have impressed me the most. You need to be confident to be a freshman playing against the schedule KU faces and Tharpe is. He's so fast that when he spells Tyshawn Taylor or Elijah Johnson, KU won't play at a slower pace.

JN: Looking back, the two-game suspensions for Taylor and Johnson should end up benefiting KU, as Tharpe appeared to get most of his early-season jitters out of the way already. 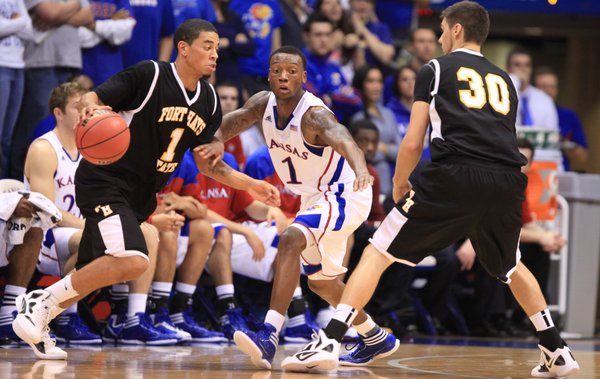 Kansas guard Naadir Tharpe looks to fight through a screen by Fort Hays State forward K.C. Rodenburg (30) while defending Omar McDade (1) during the first half on Tuesday, Nov. 8, 2011 at Allen Fieldhouse. by Nick Krug

Obviously he could still improve defensively, but the freshman was a much better penetrator and shooter than I was expecting. And where did he learn that runner? That's a difficult shot that he made look pretty easy against Fort Hays State. Pretty impressive that the 5-foot-11 point guard averaged 15.5 points in KU's two exhibition contests.

OK, Tom, now's the time. Do you have any bold predictions you want to give before the season begins?

TK: I have two of them. KU will upset Kentucky on Tuesday at Madison Square Garden and will lose to Iowa State in Ames. With so little depth up front, the Jayhawks will lose to some teams everybody expects them to beat, yet has a starting five packed with enough speed and confidence that they can hang with the best of the best on nights things are going well. 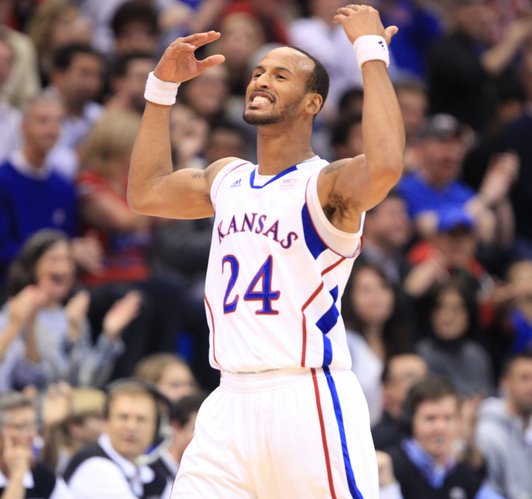 JN: That's bold enough for me. Here's mine: KU center Jeff Withey will set the new Big 12 record for blocked shots in a season, breaking the mark of 133 set by Baylor's Ekpe Udoh in 2009-10. 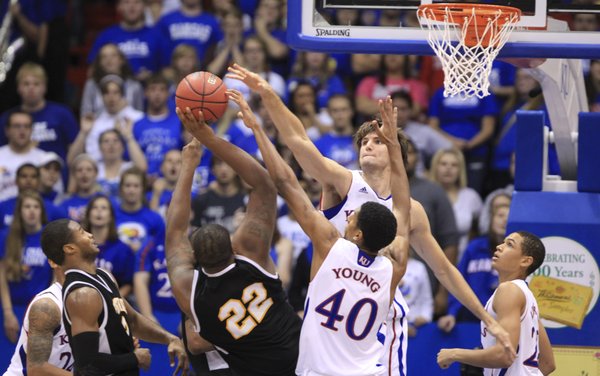 He'll have to stay healthy to get the record, but the big man has great defensive instincts around the basket and a long enough reach to bother even the most elusive of guards who try to get around him.

TK: Kansas by 30. Taylor and Johnson will feed off the energy of a crowd that didn't get to see them play in the exhibition season and KU will play fast all night. 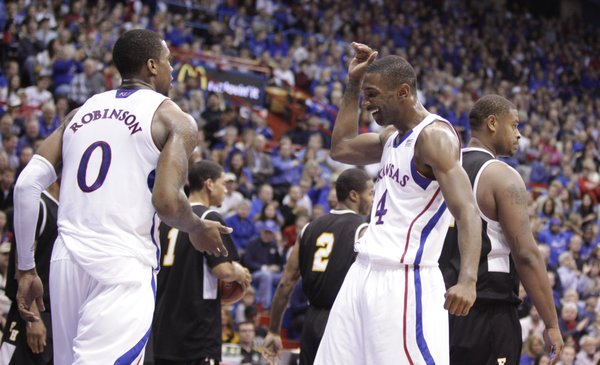 Teammates Justin Wesley (4) and Thomas Robinson slap hands after a Robinson converted a bucket and a foul against Fort Hays State during the first half on Tuesday, Nov. 8, 2011 at Allen Fieldhouse. by Nick Krug

Six-foot-8 Towson forward Robert Nwankwo should give Thomas Robinson and the rest of the KU big men a challenge on the boards, but it won't be enough to keep the Tigers from their 20th consecutive loss. 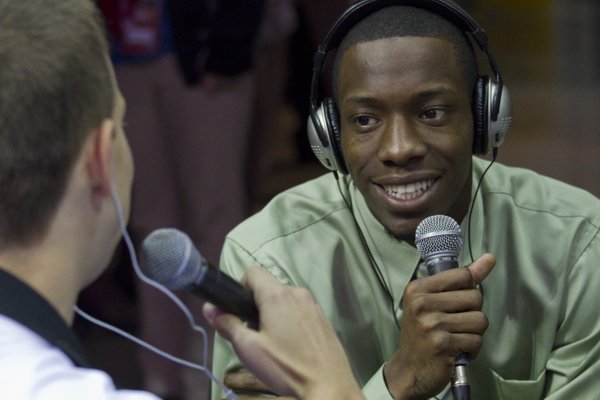 Tyshawn Taylor was live on 610 sports radio with Danny Parkins on Thursday, Oct. 20, 2011, at the Big 12 men's basketball media day at the Sprint Center. by Kevin Anderson

Towson will have trouble keeping him from getting to the rim. 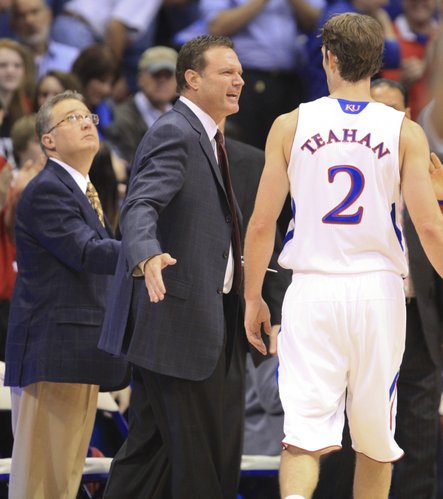 Kansas guard Conner Teahan gets a congratulatory pat from head coach Bill Self after a bucket during a timeout against Fort Hays State on Tuesday, Nov. 8, 2011 at Allen Fieldhouse. by Nick Krug

Towson allowed opponents to shoot better than 40 percent from three-point range last season, and I'm guessing the Tigers won't be much improved in their first game this year. In two exhibition games, Teahan made 13 of 16 field goals (81.3 percent) and 7 of 10 three-pointers (70 percent).

I'll stick with the hot shooter and say that Teahan provides double-figure scoring off the bench.

Predictions: Kansas will have a similar year to that of UK last year, losing 7 to 10 games. With the lack of depth, Self will have to coach this team timeout to timeout. In watching the 2 exhibition games, you can see how much progress can be made every week, Tharpe looked lost the first game, and looked like he had been running the show for quite a while in the second game. While his stats did not show it, I thought Kevin Young made great progress from game 1. Two wild cards for this team.

As far as the season goes, Kentucky beats Kansas as depth and talent take over in the seconde half. I do predict this team struggles early, but learns to play team defense and has a run to the Elite 8.

I like your comparison to last year's UK team! The only exception is that we're starting guys with talent and experience, and they're not, nor did they last year, so I think KU will beat these guys on Monday. Any games they lose this year will be to a) injury, b) foul trouble, or c) lack of talent, particularly at the end of the season after the young, talented teams have a chance to grow. Fortunately, there aren't that many diaper dandies in the Big XII this year, so we'll be okay.

I'm excited to see how well we play in the tourney, too, since depth isn't as valuable there as it is during the season. If we can stay healthy, I would predict AT LEAST an Elite Eight.

Ha, I never comment on grammer but I had the same confusion

Good call on not commenting on other people's grammar there tahawk81...

I think you mean grammer...

Then again, maybe there right and yur wrong . . .

Really? You were "confused" by the caption? Granted, it could have been worded better, but "confused"?

Maybe not "confused", but the wording was bad enough to need some benefit-of-the-doubt interpretation. You are a forgiving reader.

Sharpe is an incredible PG! Definitely Aaron Miles type. He's gonna be great. Seriously Tom, KU losing at Iowa State? I dunno bout that. I think KU will lose by 6 to Kentucky, though I hope we win. But Iowa state has never given us trouble and I dont think itll start this season. We got this current game by 30 and my Hawk to rock is Elijah, a double double comes to my head in pts and assts. although I could be confusing that image with Tyshawn's

You must be pretty young. When my daughters were at KU in the 80s, Danny Manning was never able to get a win in Ames. They have been a thorn in KU's side for many years.

The record against IaSt has more holes in it than practically any other Big8-XII team. Seven losses since '96.

If the last 10-15 years are part of "never", you should reconsider commenting without first looking at the record.

Hey Tom, did you mean Ohio state? If you did then I am with you there. I think we can beat them at home.

No, I think he meant Iowa State. Hilton Coliseum has always been a tough place to play. Besides, we play Ohio State at Allen Fieldhouse.

Go look at Jeff's block numbers compared the number of minutes he played last year, they are very good and he could make a legitimate run at that record.

ROCK CHALK JAYHAWK! If we beat UK, I'll be satisfied with the first half of this season.

UK would be the biggest plum, but I'll settle for two wins against ranked teams before conference play starts. UK, OhioSt and whomever at Maui will give us the competition Pac teams haven't managed recently, and it would be great to meet it head-on.

Here's my bold prediction for the year. KU loses to a higher seeded team in the NCAA tournament this year.

Some other bold predictions about the upcoming season (not all involve KU):

I will watch the KU game tonight after I get home from my HS football game. I hope TT, EJ and T-Rob have really good performances. Rock Chalk Jayhawk! Go KU!

texashawk10, I am with you on most of your predictions. The Big 12 placing 6 teams in the tournament seems a stretch this season; and even with that incredible talent led by Harrison Barnes (who would have been a fine Jayhawk recruit), Roy will have a tough time not losing even one game before the Madness. If Withey can stay healthy, his breaking that season block record seems very possible. I was really pleased to see him re-enter the Pitt State game after turning the ankle. Bill Self's tough determination and Andrea Hudy's training regimen are working well for his future NBA draft status. It is a joy to watch him and Travis and Conner, kids who have committed and bided their time, now rise to prominence in the program. All 3 could make a dent in the Kansas alltime statistical charts. Regardless of the immediate impact of one and done recruits, I much prefer cheering for the 3-5 year player who bonds with the fanbase and becomes familiar on the roster year in and out.

That's why some my predictions could actually be considered pretty bold. Some of them aren't bold, but the UNC and KState one's are actually bold.