In this AP file photo, former Buffalo Bulls defensive tackle Eddie Wilson — who decided on May 30, 2021, to transfer to the University of Kansas — celebrates during the first half of an NCAA college football game against the Akron Zips at UB stadium in Amherst, N.Y., Saturday Dec. 12, 2020. (AP/ Photo Jeffrey T. Barnes)

Eddie Wilson, a defensive tackle who played each of the past three seasons at UB, became the first Buffalo transplant to make known his decision to join the Jayhawks. And before the evening was over, former Buffalo receiver Trevor Wilson and previous Bulls center Mike Novitsky also divulged their plans to do the same.

Listed most recently on the Bulls’ roster at 6-foot-4 and 325 pounds, Eddie Wilson started every game at UB in both 2019 and 2020. This past year, he made 21 total tackles and a sack in an abbreviated seven-game season for Buffalo.

A third-team All-MAC selection in 2020, Eddie Wilson told Jon Kirby of Jayhawk Slant he wants to help his new teammates and produce.

“I'm going to be here for guys on and off the field,” Wilson said. “I've been here before and started on the field. I want to lead by example with my actions and I want to help the whole defensive line be dominant. I want them to see how hard I will work. I want to help everyone I can.”

Eddie Wilson projects to fill an obvious need for the Jayhawks on the defensive line, after nose tackle Da’Jon Terry left the program a few weeks back in order to transfer to Tennessee.

Rated as a three-star D-lineman coming out of high school in New York in 2018, Eddie Wilson has 34 games of college football experience and will be a senior this coming season.

Novitsky started at center for Buffalo each of the past two seasons. The 6-5, 295-pound offensive lineman from Victor, N.Y., was named first-team All-MAC in 2020.

An under-the-radar recruit in the Class of 2018, Novitsky signed with UB as a two-star prospect. He redshirted his first year on campus before stepping into a starting role as a redshirt freshman.

KU offensive coordinator Andy Kotelnicki and O-line coach Scott Fuchs trusted Novitsky to start every game for UB’s offense — 20 in total — the past two seasons. Novitsky was listed as a junior at Buffalo before transferring. 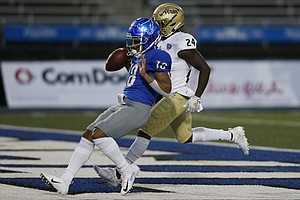 A 5-11, 190-pound receiver, Trevor Wilson will join the Jayhawks as a sophomore. The wideout from Tallahassee, Fla., redshirted at UB in 2019, before appearing in all seven games for the Bulls in 2020.

In his debut college campaign, Trevor Wilson caught 16 passes for 319 yards and three touchdowns. His breakout game came late in the season versus Ball State, when he hauled in six receptions for 118 yards and a TD.

“As far as speed that's one of my main focuses when playing football,” Trevor Wilson told Jayhawk Slant. “I mean, that's what I've been doing since middle school. I come from a big track background. And I just I feel like any team that I'm on I just bring that explosive playmaking to the team.”

As a prep recruit in the Class of 2019, Trevor Wilson had several scholarship offers, from programs such as Oregon, Maryland, Texas Tech, Memphis, UCF and others. Trevor Wilson’s late father, Robert, played receiver in the NFL from 1998-2001.

I would like to thank every coach who took time out to recruit me and give me an opportunity to play for their institution. With that being said I am proud to announce that I will be joining coach leipold at the University of Kansas #RockChalk @CoachLeipold pic.twitter.com/OMJFk6k4bK

None by Eddie Wilson

On to the next chapter of my life 🙏🏻 pic.twitter.com/AEXr5JSuIY

None by Mike Novitsky

This is excellent news. I'm especially excited about getting a first-class center to help improve the offensive line, which needed so much work.

The Leipold era looks like it's getting off to a solid start!

Is this a free transfer year, can we rebuild our roster in 1 year? Not saying it would be fully there, but can we get to 85 scholarships?

If you do the numbers...the free year of eligibility should help KU get the numbers up. But, no we will not get up 85 scholarships. Very few schools get to the 85 number. We might be able to get to 75 by reshirting some upper classmen. If KU gets to 75, a pretty good number, number of schlarship players shouldn't be an issue.

Someone can chime in on the rule, but I think you can only offer 25 in one year....100 scholarshipoffers over 4 years, and a max of 85 players on scholarship at any one time. Back in the day....every class would lose players to quitting school, and academics....it was rare for players to transfer to play some where else....and, from what I was told a long time ago, the max of 85 scholarships number comes from the average amount of player loss over the 4 years.

With the transfer portal, I am wondering how it will affect player attrition, and whether or not the rules for the number of scholarships will have to be changed.

When you read the comments these guys made in announcing their transfer it is obvious they are very big on Leipold and his coaching staff. All three played in every game last season. Besides being huge for helping the team, this is yet one more positive about this coaching staff.

Center might be the one position we don’t need help. Part of that is whether Grunhard is a starter for us, plus we have our returning starter from the end of last year. The temptation is to throw out the baby and bath water. Either way depth is good.

It is also definitely good to get a DT and WR. The former is virtually nonexistent and one of the most critical positions. The latter is a position with lots young players. It’s always nice to have speed. There’s another guy from FL I think, Horne(?), that’s supposed to have lots of speed I don’t recall seeing much from him.

Reading this morning there are 3 more Buffalo transfers; DT, LB, OT. The OT seems light (mid 200’s), but the DT is size appropriate at almost 300.

Also reading that Novitsky was the third highest rated center in football last season. That is encouraging.

I hope more bowl-team buffaloes roam over to Kansas…

Unfortunately, one of the best Bulls, a guard, went to Baylor.