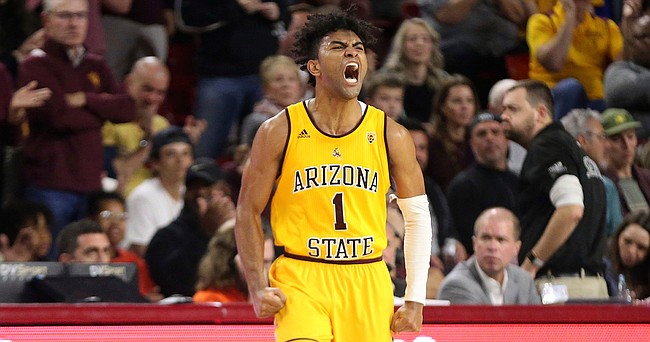 Sounds like a great fit for this team. I’m excited to see him in a Jayhawk uniform next year. This team has the potential to be very good - if they mesh well together.

That is kind of my concern...Self only plays around 8 players regularly. Someone is not going to be happy a year from now and will transfer again. Hopefully the best players rise to the top and remain happy and we get a couple of seasons from this group.

Well Braun needs to get out of whatever mental funk he was in and start shooting the ball again.

We actually may have too many guards, but so what, Coach Self will sort it out. And don't forget Yesephu is also, a tremendous player.

We will certainly have more fire power next year.

Remy is a borderline second round candidate for the 2021 draft in July. Not sure if the G League is an option for him. What if he gets feedback from the league that he should play internationally for a year? This news just means we are in the queue for him to play for us. We will know more after the draft.

Unfortunately, his 3pt% has regressed over the years

Maybe that's something the NBA will tell him to focus on in his extra year of college.

Well, if you can't beat him, add him to your roster for next season, I suppose.

If he makes it to Lawrence, he will be a great variable on the team. He won’t have to do too much and can pick the moments to stick the dagger. Think Malik Newman...

Robert - Unless he’s running the show; think Frank Mason. Could be Yesufu too. Maybe Harris develops more strength and outside shot. Doesn’t seem likely that either of the youngsters will supplant the veterans in year 1.

going to be a strange roster indeed: we now have essentially 5 (5!) ~six-foot point/combo guards - 4 of them newcomers - go along with DJ! We look more and more like a team trying to bottle Baylor's magic from last season...

and even if Ochai doesn't come back, with SO MANY similar-sized guards, 3 of them will never see the court next year(4 if Ochai returns!). This is good news for us because he looks like a stud, but bad news for Pettiford, Cuffe Jr. and DJ for sure

Amazing how many of you don't get it with Martin. If he ends up in Lawrence this is a big time pick up for a year. Truly one of the top returning players in the country. Legitimate all american candidate and better than anyone we have in the backcourt. If Wilson comes back and Martin does come this makes us probably preseason number 1 and legit title contender with or without Ochai.

Reminds me of '08 when nearly everyone could be a starter.

‘08 was a little different in that virtually all those starters and non-starters were drafted. Not so much the current team though there’s still time for development.

i get it- i think he could have a big-time season, and we should be thrilled with the pick-up. I admit i didn't watch him at all last year, but he reminds me of BU's Butler from clips I've seen

Dujuan Harris seems lost in all this. Redshirting next year?