The additions of several new players to the Kansas football team are now officially official, as the program updated its published roster this week.

With both incoming freshmen and transfers arriving on campus for summer courses and workouts, the Jayhawks’ list of players for the 2021 season now looks more complete than it did in the spring.

Zion DeBose, a senior defensive end and Virginia Tech graduate transfer who originally planned to play for Leipold at Buffalo, also is on board at KU.

So is former North Texas starting quarterback Jason Bean, a junior who was recruited by KU receivers coach Emmett Jones this past spring, while Jones was serving as the Jayhawks’ interim head coach.

KU football’s director of sports performance, Matt Gildersleeve, honored both Bean and Trevor Wilson this week by making them a part of the “rock chalk rack” group in the weight room. 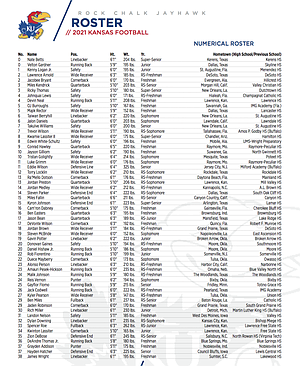 While eight freshmen enrolled at KU for the spring semester, allowing them to participate in workouts and the entirety of spring practices over the course of the past several months, a new wave of freshmen from KU’s 2021 signing class has now joined them.

The only remaining member of KU’s 2021 signing class who has yet to join the team is freshman linebacker Trey Staley, from Snellville, Ga.

The Jayhawks also added a group of freshman walk-ons to the roster.

The newest version of KU’s roster — the first one published since Leipold and his former UB coordinators and assistants came in — also featured some returning players with new positions next to their names.

A pair of key defenders with starting experience who were considered outside linebackers by the previous staff, super-senior Kyron Johnson and sophomore Steven Parker, are now listed at defensive end. Similarly, senior reserve Hayden Hatcher is at D-end now, too.

Some other players, though, have switched positions since the initial spring roster was published.

Sophomore Torry Locklin, who made a brief return to quarterback during the spring, is now back out wide at receiver again.

Johnquai Lewis, a redshirt freshman who was listed at corner in the spring, is now at safety.

Malik Johnson, a redshirt freshman, has been moved from receiver to running back.

Additionally, redshirt sophomore Dylan Downing, who was at outside linebacker in the spring, is now simply a linebacker.

Is going from OLB to D-End a a result of switching to a 4-3 defense?

Really glad to see Bean is officially on Campus

Bean's 14 TD passes and 5 INTs in 7 games as a starter is solid. Maybe, if our receivers run better routes than those at North Texas, he could get up into the mid 60's to 70% range in completion percentage. Of course, maybe higher percentage passes could help too. Not sure what kind of offense they have at North Texas. Could help improve the entire QB situation just simply having him to compete with the other guys making other guys get better.

My big concern is still the O-line. Coast Carolina on the radar guys? We have to be able to beat them if we expect to get a Big 12 win. Saw the Wood!

I think Devin Neal is underrated by Rivals and others. We need the run threat to be able to have the pass threat, though it should go without saying. The first hump is to maybe get 3 or 4 wins with some close losses in the Big12. Goal one, win the Sunflower Showdown and one or two other Big 12 wins. It may not happen this coming season, but 2 or 3 seasons in for Lance I can see it happening. Then seasons 4 or 5 set the goal to be goal eligible, get a couple of bowl games, recruiting improvement would be certain.

Well, "By God", we're not Armadillo's, and it looks like practices might get the Necesary Roughness to improve. I count 25 Offensive Lineman on this team. That's a good number! My guess is we can find or develop 5 that can play. At this point on offense I am most concerned at QB and the system itself. On defense we lost a lot at corner and in the middle. So can we strengthen those areas up and not get runover or burned each week. Bringing things together, if our dfense can slow things down a bit, and if our offense can stay on the field longer and score a little, if we can reduce the stupid mistakes, and bad game time decisions, KU can start closing the gap.