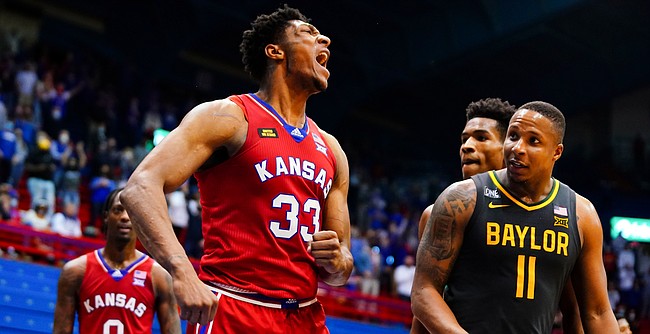 Kansas forward David McCormack (33) roars after swatting a Baylor shot late in the second half on Saturday, Feb. 27, 2021 at Allen Fieldhouse. At right is Baylor guard Mark Vital (11).

The game, which was officially announced Wednesday, will take place on Dec. 2 at UBS Arena in Elmnot, N.Y., the future home of hockey’s New York Islanders.

It will mark KU’s second trip to the Big Apple during the 2021-22 season, as the Jayhawks are also slated to face Michigan State at Madison Square Garden in Manhattan on Nov. 9.

The game will mark KU’s third appearance in the Big 12/Big East Battle. The Jayhawks defeated No. 8 Creighton at Allen Fieldhouse last December and fell to No. 18 Villanova in Philadelphia in December of 2019.

According to a release announcing the game, this year’s matchups were jointly determined by the two conferences. The home school has the right to determine the venue of its game. Broadcast arrangements for the games will be determined by the national television rights holder of the home team, which is ESPN for the Big 12 and FOX Sports for the BIG EAST.

The four-year agreement between the two conferences runs through the 2022-23 season and features an equal number of games played in each conference’s home market each year.

Tipoff times and television designations will be announced when available.

I was doing some R&D this morning on this Rivalry.

Frank moved on to North Carolina where he got his Revenge in the 1957 triple overtime thriller versus Wilt and Jayhawks.

This will be a nice homecoming for Cuffee. Hope he gets some minutes this game though I don’t expect there to be lots for him through the season with this veteran roster.

Looking forward to seeing the game at the new UBS arena that is adjacent to Belmont Park in Elmont on Long Island.