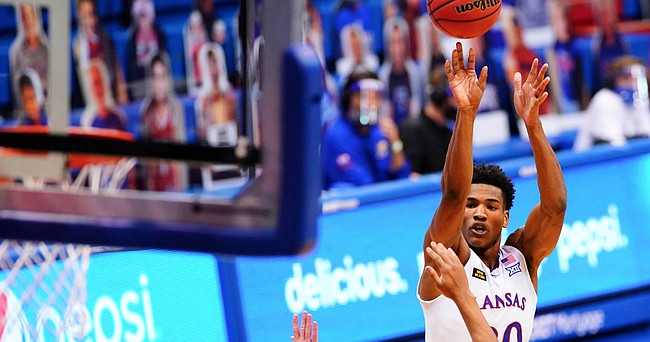 Kansas guard Ochai Agbaji (30) puts up a three over Washburn guard Azeem Ross (3) during the second half on Thursday, Dec. 3, 2020 at Allen Fieldhouse.

Kansas guard Ochai Agbaji has decided to return to KU for his senior season after spending the last several weeks testing his NBA draft status,

Agbaji's decision to withdraw his name from the 2021 NBA draft pool cleared the way for him to return to a Kansas roster that is projected by many to be a top-three team entering the 2021-22 college basketball season.

Agbaji’s decision comes five days after teammate Jalen Wilson withdrew his name from the NBA draft to return to Kansas for his sophomore season.

“Going through the process at the NBA Combine and team workouts has been a really good experience," Agbaji said. "I cannot thank my family enough, the NBA teams, my KU coaches and teammates, as well as everyone who supported me in this process. I am so looking forward to next season, playing in front of the best fans in basketball and contending for a national championship.”

Like Wilson, Agbaji made it clear back in April that he planned to retain his college eligibility while going through the draft process. Although his announcement to declare for the draft sounded like a final farewell, Agbaji noted in his Twitter post announcing the decision that he was looking forward to "hearing from NBA professionals on ways I can improve my game."

He added: "This is a great opportunity as I work towards my goal of being a professional basketball player."

The return of Agbaji and Wilson would give Kansas four starters back from the 2020-21 team that finished 21-9. Senior-to-be David McCormack and junior Christian Braun are the other two. Returning 80% of last season's starting lineup is both noteworthy and key for Kansas given the fact that KU coach Bill Self added 10 newcomers (8 scholarship players and 2 walk-ons) to the roster during the offseason.

Agbaji, who has been a key veteran on the last two Kansas teams, also shot a career-best 37% from 3-point range during the 2020-21 season.

According to ESPN.com draft analyst Jonathan Givony, Agbaji’s decision and full year still to develop makes him “a potential first-round pick” in the 2022 NBA draft.

In addition to being the top returning shooter and scorer in the Kansas lineup, Agbaji stands to be one of the best-known players in the Big 12 Conference during his final season. His past production and fan-friendly personality have made him one of the most popular players on the roster in recent years, and his experience and leadership are expected to play a key role in bringing the new-look roster together.

“We are all very excited Ochai has made the decision to return for one more year,” Self said in the release. “He did exactly what the process allows and encourages players to considering the Draft to do. He will be better for it and so will our basketball team. We believe Ochai is a first-round talent and I look forward to pushing him daily towards that. I can’t wait to have Ochai and our full complement of players here very soon.”

Later in the day Tuesday, KU also got word that Arizona State transfer Remy Martin had withdrawn his name from the draft pool and was planning to come to Kansas for his super senior season.

Welcome back! Looking forward to positive steps and a much more favorable draft position next offseason!!! Rooting for you, Ochai!

Recent changes for players to earn money helps players returning for another season. Ochai should be a receiver of offers.

If this is true this is great news for Kansas basketball and I think it's a wise and mature decision by Ochai Agbaji. Returning to school of course is not without risk but I think that the bigger risk in this case would be the risk of leaving too early and as a late second round pick or an undrafted free agent being too low of a priority to his potential NBA suitors that he ends up like too many other KU fan favorites before him as an NBA footnote. Not for lack of skill or potential, but just a victim of circumstances. However I'm certain that the feedback that he received will be well taken and he has a chance not only to prove his worth to NBA GMs but to make himself an instant millionaire next summer.

Not to mention he will be more marketable for NIL purposes at KU than he would be as a GLeaguer.

I am expecting a social media post from Remy Martin this afternoon followed by a press release from Ochai Agbaji this afternoon or tomorrow around mid day.

This news was out there for 2-3 hours this morning before they posted this. Little slow KUsports.

Anyways this is awesome news.

does The World Company use pacific time?

It wasn't live on the site then, but that's when I put it in the system. Forgot to change the time when I made it live. The reason it wasn't up immediately was because I spent a couple of hours trying to confirm it for myself before relying on the other report, i.e. earning my paycheck. Wasn't able to get it confirmed right away so I wanted to get something up. But this is pretty standard stuff with most journalists I know.

Hope that makes sense and explains it a little better. I'm always going to try to confirm things independently before relying on other reports. That's the job.

First I would like to welcome OKC back to the Jayhawks . Having said that even If Remy doesnt come this is a team with high expectations Veteran upperclass team , No Covid ,no excuses , no reason this team cant compete at a high level , its up to Self to fit the pieces together .

"It's up to Self to fit the pieces together..."

Oh wait, you're serious. LET ME LAUGH EVEN HARDER!

great news and what I expected. He can only raise his stock.

<p>ESPN.com is the first place that I saw post the info on this. No matter.

The real trick for Self now is going to be keeping all those guys happy. As is life as a HC anywhere really. Especially now that options are available.

<p>ESPN.com (Jonathan Givony) absolutely had it first. And I'm sure he's dead on. Jonathan's one of the best.

CLEAN SWEEP - - three for three , Remy coming to and withdrew. - This team is loaded - - and the Depth is going to be insane. - Instead of the typical 7-8 players probably looking morE like possibly 8-9 seeing plentiful minutes - -I'm ready. - - ROCK CHALK ALL DAY LONG BABY

despite all of the depth I expect a usual 8 man rotation.

There will be three battles for rotation minutes

Yesufu and JCL will battle for perimeter scoring minutes.

Yesufu, Harris and Pettiford will battle for back up ball handling minutes.

C. Martin and Mitch will battle for first big off the bench.

The starting 5 will likely be R. Martin, Braun, Agbaji, Wilson, and DMac. And I predict that Yesufu, Harris, and Mitch will round out the 8 man rotation. Yesufu will be first man off the bench because he's more dynamic than Harris and JCL. Bill Self and the gang will be praying that DMac stays healthy and avoids foul trouble all year.

I think JCL is being underestimated but Tony is absolutely correct that D (&intangibles) ultimately decide PT.

Matt - Thank you for always doing your job and more.

Bryce - Were you the person that conceded the gold medal game of the World University Games at halftime a few years ago? Maybe it was Brett that quit on the team before they won it all? Maybe it was someone else though it never ceases to amaze me how much smarter some armchair pgs compared to our championship and award winning HofF coach.

I am shocked that these draft testing players are all coming back. Our team last year was loaded with NBA 1st round draft choices. Add Remy to our team, plus the plethora of walk-ons, portal transfers and donors and we are going to be a force. It just goes to show you that when you have exhausted every single option, been told you need to be just a smidge bit better, the breathless faithful will welcome you back with open arms. Magnificent Magical season in store for us. If nothing else we will certainly outnumber any team we face.

Matt, I want to seriously thank you for adding a key*^ to our 18 member roster list, so we can keep track on all the different paths you can use to actually make a Blue Blood roster whether you deserve to or not. A few more ideas for you. ~ for Portal, $ for donor, ? for why, ` for huh.

Don't forget that $ could also stand for NIL star.