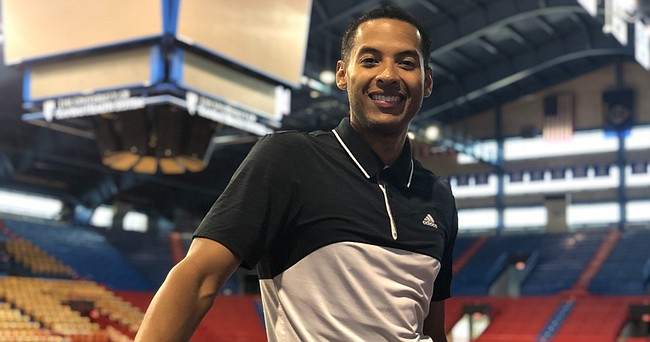 Kansas basketball coach Bill Self announced Monday night that Jeremy Case has been promoted into a full-time assistant coaching role with the Jayhawks.

Case fills the seat on Self’s bench that came open after the departure of Jerrance Howard earlier this year. But his addition to the staff hardly qualifies as adding a new face to the program.

“I’ve known Jeremy since he was a baby and had the opportunity to coach him at KU,” Self said in a news release announcing Case’s promotion from interim to full-time assistant. “Then I had the chance to watch him one year with us as a graduate assistant before he went off to cut his teeth else-where in the coaching profession. He’s sharp. He’s personable and he’s prepared. Kansas is fortunate to have him represent this university.”

A source close to the KU program told the Journal-World on Monday that former KU guard Brady Morningstar would be added to the staff to fill Case’s role. 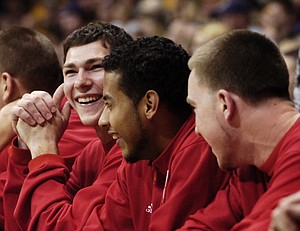 Freshman Tyrel Reed, from left, senior Jeremy Case and sophomore Brady Morningstar react to Brandon Rush's dunk in the second half Saturday, Feb. 2, 2008 during the Jayhawks' 72-59 victory against CU in Boulder.

His recent time with the Kansas program, as well as his four-plus months in an interim role, allowed Case to both prove himself to Self and ease into the new role.

In the release, Self said he thought Case could be “a tremendous recruiter.”

“He has done a terrific job since we put him into the interim position back in April,” Self said. “And I anticipate him being a star within our profession.”

While talking with the Journal-World about his interim status in June, Case acknowledged that his ability to recruit high-level talent would be his biggest challenge. But it’s one he believes he’s ready for and one he spent countless hours trying to get a handle on during the past four months.

One of the things that has made Case a favorite among players, staff members and fans throughout his time with the KU staff is his ability to connect with anybody.

Case said the opportunity to develop lasting bonds with people from all walks of life was what of drew him to coaching in the first place.

He saw his father, Win, coach and connect with players throughout his youth, and then saw it again at Kansas while playing for Self. 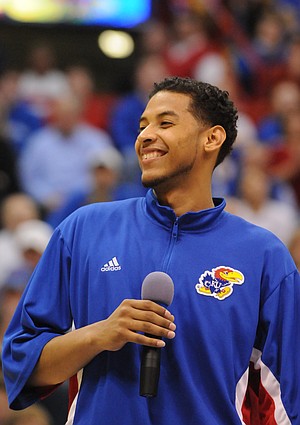 “The relationships are the biggest part of it,” Case told the Journal-World in June. “I like teaching a kid and then seeing him do it on the floor and seeing the light come on. The main thing is you’re not just teaching basketball. You’re teaching some life skills and you’re teaching kids how to work hard and how to be off the court, as well.

“My thing is I’m going to build a relationship with someone. I think I’m personable. I think people like me. And if there’s anything I’m going to do it’s listen to those two guys (veteran KU assistants Norm Roberts and Kurtis Townsend) and lean on them as much as possible and just grind.”

In promoting Case, the Jayhawks are going with a trend that has been seen throughout college basketball in recent years, with coaches filling their staffs with younger, up-and-coming coaching talent.

The fact that Self is able to do that with someone who already has so much knowledge and passion for KU is merely viewed as a bonus.

“I’m ready to continue building long-term and sustained success within the KU basketball program,” Case said in the release. “I couldn’t be more appreciative of the opportunity. I will do everything in my power to make coach Self, all my former teammates and all of KU alumni proud by ensuring I take care of the rich history and tradition of the program while in this position.”

Congratulations Mr. Case! Oops, I mean (Assistant) Coach Case!! I'm confident you are going to do a great job & look forward to following your career.

Always helps when you can use your contacts to get ahead. Hope he gets better with recruiting.

Nice! You were able to get in your passive aggressive "dig" in while making your post. You are truly a work of art.

Thanks Joe it is very nice to have you in my corner. Your wrong, but I can see where people get easily confused on here. It can be quite bracing to hear the truth. Have some tea, go to your happy place and think about puppies.

“Gets better with recruiting”?

The comment seems to imply that his recruiting has been subpar.

Does Jeremy have any history of recruiting? Any that we are aware of?

The more appropriate comment in this regard would seem to be hope he can continue the history of excellent recruiting established by his predecessors.

I can imagine you talking into a mirror as you spin your "Daily Affirmation" for your more appropriate comment. LOL

I hope Case gets better with recruiting. He says he needs to, must be subpar, I wish him well in developing this skill.

Reading comprehension can be tricky.

Jeremy doesn’t say that his recruiting needs to be better/has been subpar, though if a person practiced negative thinking/speech with or without a mirror, the twist could occur.

Interesting you mention reading comprehension. Yours is the one that is subpar. You actually prove my point with your "quote", so Thank You I guess??? Look I would like to educate you so you can improve, but your much more amusing just the way you are. Dirk You are good enough, You are smart enough and dog gone it, people like you. And That's OK - Daily Affirmation free of charge. I still hope Case gets better at recruiting.

Thanks Josh, I always run these by the spell checker and grammer filter, but ther'y dont catch everything.

Are you admitting that you don't know the difference between "your" and "you're" without assistance from a grammar (not grammer by the way) filter?

Just teasing of course. It's fun seeing you all going back and forth spewing your wisdom and perfection from the comfort of your couches during the offseason.

Bring on the hoops already! RCJHKU!!