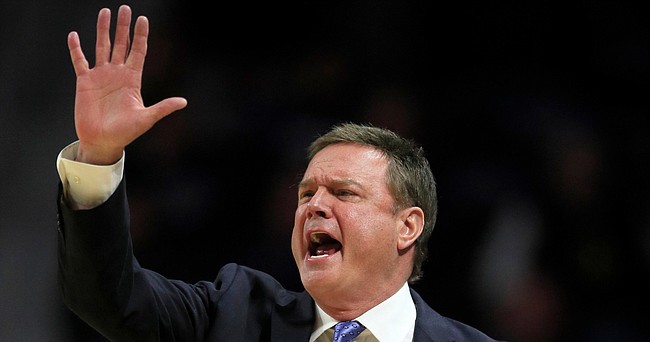 Kansas head coach Bill Self calls a play during the first half of an NCAA college basketball game against Kansas State in Manhattan, Kan., Saturday, Feb. 29, 2020. (AP Photo/Orlin Wagner)

The recent departure of senior forward Silvio De Sousa has inspired Kansas basketball coach Bill Self to explore the idea of playing five-guard lineups this season.

But Self and guards KU Ochai Agbaji and Christian noted Thursday afternoon that the Jayhawks are still in the infant stages of that experiment.

“We (could) go from playing small to playing tiny,” Self said Thursday during a video press conference. “And I do think that we could be very hard to guard if we can get creative and get guys to understand how to be creative playing five out, which I've never done before.”

One of the things that makes the idea appealing is the fact that the Kansas backcourt is loaded with depth, talent and versatility.

Included on the list of guards that could log significant minutes this season are veterans and newcomers and everything in between.

Agbaji, a junior who has started for the Jayhawks for the past two seasons, recalled one game last year — a home win over Tennessee — when KU actually used the five-guard look.

“We had Tristan (Enaruna) in there at the 5, that worked out pretty well,” Agbaji said. “It’s kind of still in the works, but that’s something we may look at this season.”

Because most of KU’s guards have little to no experience playing down low, Self said the Jayhawks would be versatile in assigning positions in their five-guard looks.

“I think maybe we could have rotating five,” Self said. “Maybe our 5 is whoever their 5 is guarding. I don’t think that we’re going to be dead set on who would be playing what position. It would be very positionless. But I will say this; if I had to pick somebody that I’d want to be our point guard and somebody that had to play the 5, I would take Marcus (Garrett) on both of those.”

Like Agbaji, Self was non-committal about how much or how little the Jayhawks might use the smaller lineups, noting that most of the reason he’s even considering it is so the Jayhawks are prepared for anything.

“I’m not saying that’s how we want to play by any stretch,” Self sai. “But I think we need to be prepared to play that way because of foul situations or injuries or whatever.”

With official practices now in their second week, Self said several players, big and small, had stood out in the early going, with Agbaji, Marcus Garrett and David McCormack tops among them.

“Ochai and Marcus and David would certainly have the inside track on starting positions and I do believe that's still the case without question,” Self said.

After that, Self said returning guards Braun, Enaruna and Jalen Wilson and backcourt newcomers Bryce Thompson and Tyon Grant-Foster all have stood out at different times.

“That would be an exciting lineup for me,” Braun said.

There will be no fans in the stands on Friday night for the annual Late Night in the Phog, and there will be no live action either during the event that will be streamed online at ESPN+ and on KU’s website.

“Everything was done pre-recorded,” Self said of the skits, scrimmages and hype videos that will accompany the 90-minute event that will also be shown on Midco, Cox, Spectrum and other cable networks across Kansas.

Even with this year’s Late Night being drastically different than the 35 that have come before it, Self said he was proud of the way KU pulled it together to keep the tradition alive.

“I thought it went well,” Self said. “I haven’t seen everything. I know there’s obviously many of the same aspects that we’ve always done.”

Added Agbaji: "Our scrimmage and some of the different stuff we did was cool, something new for the new guys. But I think it was still cool and it should turn out great. I'm excited to see what they what they put together."

Freshman guard Latrell Jossell is still dealing with an ankle injury that has limited his participation during KU’s first two weeks of practice.

“He still hasn't practiced yet,” Self said of Jossell. “He’s still not back yet, so he he’s behind but everybody else’s had their moments where they looked really good.”

Self on DeSousa’s departure, Late Night and more by KUsports.com

Ochai Agbaji worked on ‘everything’ during offseason by KUsports.com

Has a pay scale been established? What’s the value of leaving the one dude, with a pair, hanging and twisting in the wind?

I’m thinking Dollar Bill will find a way to justify having 6 players on the floor.

I was once a proud Jayhawk. This slimy pos needs to go now.

Do you know how to do anything but complain? I mean go find another school to support if this one disappoints you so much...... we're all tired of reading it from you.

Toning it down a little would be a good idea, Mr. McCabe. We're all entitled to our opinions and we like to create a forum where you're free to express those (within reason), but continual attacks, name-calling and borderline profanity are not needed here. Get creative! I know you've got it in you.

This has been his MO for at least a year. Look at his post history, it's 99% stuff like this. It will not change unless he's banned and his IP address is blocked. Trolls don't stop, they feed off of annoying others.

If allowing false accusations makes one a good person, then when pigs fly.
Bill Self has done a hell of a good job here, and he has not cheated. The NCAA has failed to control the influence of shoe companies, and that is sad, but KU should not have to take penalties as some kind of sacrificial goat .

Show us the real evidence, not the innuendo. How can we be a victim and a criminal at the same time? Explain that? Trolls can't come up with evidence. But we are all waiting?

Looking forward to this season. I think Mitch is gonna come out like an animal. Wish we had one more proven big!

The Hawks will get a lot of mileage out of Garrett and McCormack workin’ the pick ‘n pop.

It is interesting to think back a few years to when some people were saying Coach Self was a washed up dinosaur because he couldn’t adapt. Instead, HOF brilliance and competitiveness that is out of sight of some or even most of us now has us reading about 5 guard lineups. It helps to have multiple 6-8 to 6-10 guards but even more so to have great coaches and leadership.

It is also interesting to remember some people saying that Marcus shouldn’t even be on the court. Not sure if they were the same as the previously mentioned critics. Love that this has become his team. Looking forward to seeing them play.

We really need to find out who's peeing in McCabe's Wheaties! I mean, what else could it be?