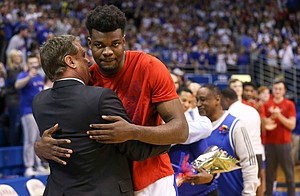 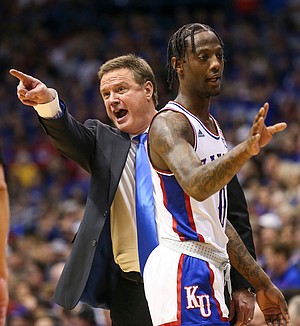 How could KU NOT hang a National Championship banner? We finished #1 in both polls, we would have been the #1 overall seed if there were an NCAA Tournament, and also #1 on KenPom, as well as #1 in the BPI. I say screw any critics and hang a banner. This team is that special. They deserve it.

You certainly add 2020 to the conference titles banner and, maybe, all you have to do is hang a banner with the numbers 2019-2020.

Everyone in America will always know what it means, it does not violate any concerns regarding involvement with the NCAA and, in a way, it will stand out unique from every other banner in the Phog, just like the season it will represent.

Matt, maybe this is the answer Bill is looking for!!

I'm not one to hand out participation trophies, but I agree with Tony, a 2019-2020 banner should be hung. Nothing more, nothing less. A reminder of a great team and a wild season

Great idea Tony! I think any banner should say something like:

I don't know whether or not it should mention anything about not having a tournament.

We already have national championship banners hanging for seasons pre-1939 (when the tournament started). There is no reason not to hang one now.

I hate to rain on the parade, but no, KU should not be awarded the national championship. Bill Self has already said as much. You can point to 1922 and 1923, but the that is 100 years ago and they have played the NCAA tournament since 1939, this has determined the champion ever since then. KU has gotten to that mountain top 3 times since then and it's the best way to determine a champion. It's the greatest single sports tournament in the world.

I agree with coach self that they need to be recognized in some way, but even he would agree you can't hang a national championship banner for this season. They didn't go through the gauntlet and earn that. It would feel disingenuous and serve only to appeal to our fanbase. It would also piss off every other team in the country as 67 other teams could lay claim to the opportunity.

Kansas basketball is full of leaders and winners and has a legacy and accepting something they didn't earn quite frankly just wouldn't be right. I love this team and loved this season, but let's not accept or campaign for something that we didn't earn through the method that is widely known and celebrated.

If you're a true KU Fan you know we can't claim the national championship, just be honest with yourself and celebrate the wonderful season we did have and celebrate the Big 12 Title that we did earn. Is that not enough for people?

In every year that there was not a tournament, votes were used to determine the champion. This year there was not a tournament, so just like pre-1939 we should vote on it...and would you believe it has been done and KU was voted the top team. Notice our banners don't say tournament champion or helms champions. They say national champions. Just like this team is...National Champions. No differentiation needed. 2019-2020 National Champions just like the other 5.

OK, I have to admit that took me a bit to figure out what you were saying. Pretty clever, though!

I had it linear which is much easier to discern, but it came out horizontal.

Some say that, since there will be no tournament, KU will not (nor any pretenders) be named NCAA national champions this season. But, consider that there is no doubt that Kansas had the best regular season among all of Division I basketball teams. The Jayhawks defeated two of the other most accomplished teams, Dayton and Baylor (although Baylor got them once, as well). The Jayhawks had the best overall record, losing only three games and finishing on a 16-game winning streak, and they won the tough Big 12 Conference regular-season championship by two full games.

One problem for sure is that the NCAA will likely do everything they can to keep Kansas from being named national champs. Even though KU has no reason to cheat, the NCAA has postured bogus charges, and is actively pursuing them.

So, it’s obvious that the only answer is for the fans to decide. So, I’m casting my vote for the University of Kansas Jayhawks basketball team.

Kansas should hang a banner that the NCAA cannot take away. It should not say National Champions necessarily, but it should recognize their finish as the nation’s top team because these players earned that on the court. And there’s no doubt they were.

My compromise suggestion would be to hang a banner with the 2020 plus whatever ranking notation on it if you feel that is necessary [frankly, I don't], but do not hang it with the five official NATIONAL CHAMPIONSHIP Banners. Instead, hang it in a different prominent location where it will be easily recognized.

Hang it with the rest of them. The asterisk can easily be signified by having blue lettering on a crimson field instead of white.

100% historically accurate. And the best part? The NCAA can't touch it. (The polls are what the polls are, even if the wins are vacated.) This honors the team appropriately. It's the kind of banner you don't have to argue (e.g., whether or not Kansas was the National Champion or not). It simply states the reality at the conclusion of the season. Kansas for the win! 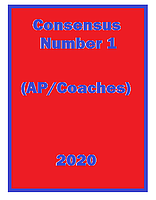 If the shoe were on the other foot, how would we all be reacting? If Duke, Kentucky, or North Carolina finished the year #1... Would we be, like, "yeah, that makes sense" or would we mock them and laugh at their silly self-gratifying banner?

Are you suggesting Duke, Kentucky, and UNC haven't acted in their self-interest before? Or that we haven't mocked any of them?

I don't get your point.

Are you being intentionally obtuse?

The banner would mean nothing to anyone else. It’s meaningless. We would never recognize any other program as “national champions” that wasn’t awarded by the NCAA or other outside organization. It would be a joke.

Recognize the team. Make a plaque or something. But don’t raise a banner next to the other ones.

WE DON'T HANG BANNERS IN OUR ARENA FOR OTHER PEOPLE!

The meaning of the banners in Allen Field House is for JAYHAWKS. No one else.

Are you interested in answering my question or is this deflection? Once again, are you suggesting Duke, Kentucky, and UNC haven't acted in their own self-interest at times when they could have potentially opened themselves up to mockery?

I like Tony's idea but hang it next to the national title banners, everyone will know what it means. As much as I want a title and think we deserve it, we shouldn't give one to ourselves. It needs to be from a third party like the AP, Coaches poll or NABC and does not require an endorsement from the NCAA.