Kansas center Udoka Azubuike (35) comes in for a dunk against TCU during the second half, Wednesday, March 5, 2020 at Allen Fieldhouse.

After spending a year watching two other teams celebrate a Big 12 title, the top-ranked Kansas Jayhawks jumped back into their familiar spot as the kings of the Big 12 Conference with a 75-66 victory over TCU on Wednesday night at Allen Fieldhouse.

KU can win the crown outright if it wins on Saturday at Texas Tech or if Baylor loses to West Virginia.

“Last year, we took a step sideways because we couldn’t bring home the title,” KU coach Bill Self told the sellout crowd after the victory. “But this year, these guys grinded, played every game and almost every possession when there was no margin for error, and they came through.” 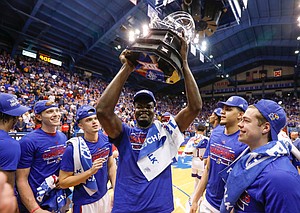 Self said this team held one distinction above all others who have won the Big 12 title during his time in Lawrence.

“I’m more proud of this one than any one we’ve ever had," Self said.

Wednesday’s senior night victory came like so many others before it this season — with KU’s two All-America candidates leading the way.

Senior center Udoka Azubuike dropped his 14th double-double of the season with a career-high 31 points and 14 rebounds. He made 13 of 14 shots from the floor and even hit 5-of-13 from the free throw line.

“He’s a warrior," sophomore point guard Devon Dotson said after the victory. "Senior night, he went out with a bang.”

Azubuike's 31-point night was the best by a KU senior on senior night since Danny Manning scored 31 against Oklahoma State on March 5, 1988.

“I was a part of that one, too," joked Self, who played his college ball at OSU from 1981-85 and was on the Oklahoma State bench as an assistant coach for Manning's outburst. "Tonight was probably better just because the game was closer. That night, Danny’s senior night, we weren’t very good at Okie State and I didn’t have a lot of confidence coming into that one.”

Dotson, meanwhile, finished with 18 points of his own and played through a left ankle injury during the final five minutes of the game.

Ankle injuries were a theme of the night, as the Jayhawks spent the days leading up to Wednesday night wondering if Azubuike’s right ankle would be healthy enough for him to play his final home game.

It wasn’t a problem. Four days after injuring the ankle in a win at Kansas State, Azubuike was his usual menacing self in Wednesday’s opening minutes. He ran the floor hard and fought for position with the urgency of a man playing his final game in KU’s historic basketball arena. 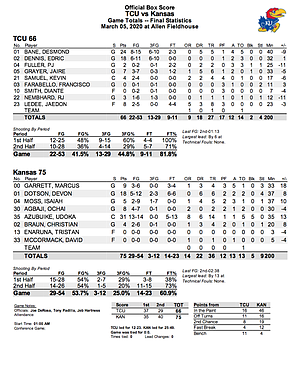 Azubuike’s teammates fed him constantly throughout the first eight minutes of the game. He scored KU’s first 10 points and recorded his Big 12-leading 14th double-double of the season with 12 minutes still to play.

Wednesday featured a few more reasons for the home crowd to celebrate. In addition to yet another win in a home finale — that’s 37 in a row dating back to the 1983-84 season — the victory was the 500th of Self’s career at KU. The Kansas coach is currently is averaging 29.4 victories per season since coming to Lawrence in 2003.

After a slow start, TCU did its best to crash the senior night fun, knocking in 9 of 15 first-half 3-pointers, including their final six attempts of the half.

That left TCU with a 37-35 lead at halftime. KU hadn’t trailed at the half since Feb. 12 at West Virginia.

The deficit did not last long.

KU reclaimed the lead at the 14:08 mark of the second half. And by the 11-minute mark, the Jayhawks’ lead was up to nine points, 56-47, thanks to a sequence that featured five consecutive points by Dotson and two vicious blocks by Azubuike.

The strong second half — KU outscored TCU 40-29 in the final 20 minutes — came in large part because of yet another strong defensive effort by the Jayhawks.

With Kansas leading by 2 and threatening to pull away, Marcus Garrett forced a tie-up near midcourt. Azubuike responded with a focused stare and said “Let’s go, let’s go, let’s go.”

The Jayhawks did just that, creating the curtain call moment for Azubuike and fellow-senior Isaiah Moss, who finished his last game at Allen Fieldhouse with 5 points in 37 minutes.

After the victory, the Big 12 title trophy was presented to the Jayhawks in front of the KU bench, where the players wore blue Big 12 title hats and celebrated with fans and teammates.

Silvio De Sousa, who missed the last 12 games with a suspension, was on the floor for the celebration.

“How about these Jayhawks,” Self said. “It’s been a great year, obviously, and the guys handled themselves so well considering some of the things we’ve had to go through. They played their butts off every night for each other and for you.”

Kansas will close the regular season with a road game at Texas Tech on Saturday before turning its attention to the postseason. KU and Tech tip off at 1 p.m. Saturday on ESPN.

Dok is the man!

Return of the King

Obviously Dok wanted to go out in style, what a game he had!

You just had to hope the frogs would cool off the second half on the 3 pointers. Nine first half, only four the second.

Great to be back on top!

Please forgive me form being obtuse....it's way past my bed time.... but what, exactly, was the one distinction that separated this team from all of Bill's other teams as he is quoted in the article?

Was it toughness? Was it having two first team All Americans? Was it having maybe the best overall defensive player in the nation? Was it overcoming adversity [spelled NCAA]? Injuries, sickness, suspensions?

It really is more of a distinction if Bill Self doesn't say that he's more proud of this team than any other....

Who knows. It could be something he'd say every year in front of those particular players. But I'd say this, being behind a game the whole season while Baylor kept winning and pushing, then going into their place when they hadn't lost in like 24 (?) games and winning on their floor, that's pretty spectacular. And to blow through this league, even in what I'd say is a down year for the conference, with one loss? We would be the first team ever in the Big12 to win 17 conf games if we win Sat. That's pretty special. Just my thoughts.

I think he is almost most proud of his current team.

“Last year, we took a step sideways because we couldn’t bring home the title,” KU coach Bill Self told the sellout crowd after the victory. “But this year, these guys grinded, played every game and almost every possession when there was no margin for error, and they came through.”

Matt paraphrased Self's reflection on the team being the best he's coached to ever win the Big XII. Then, again he quoted word for word.

“I’m more proud of this one than any one we’ve ever had," Self said.

I take it to mean that Coach recognizes the adversity that this team has had to overcome. Considering this year there are two really strong teams battling for the Big XII, with the other eight not contending, but a threat nonetheless. This has meant that a three or four loss record was not going to win the conference as in years past. Especially after losing at home to the main competition, this year's team never gave up and battled every day to bring the title home to Kansas once again... and succeeded.

My favorite part of the game (and due to a schedule conflict I only got to see the last 15 minutes of the second half, so I didn't get to see all of it) came toward the end. Isaiah Moss is driving toward the basket for what I thought would be an easy bucket, but instead dumps it off to Udoka Azubuike, and Udoka slams it in there for his 30th and 31st points of the night! It was almost as if Isaiah knew that Udoka could set a new career high with two more points and gave him the ball specifically so he could get a new career high. I don't know if that was what Isaiah had in mind, but either way, mad props to Isaiah for looking out for a fellow senior in that way!

Just a thought on ESPN+. I had very little problems with it here in Cali and last night was the first time I got to see Senior night. I’m not sure how people saw it before but this was easy!

Same for me. I think ESPN+ was great, also in Cali and was happy to be able to watch the whole game.

I have never seen Senior night so it was great on ESPN +. Thanks

1) Dok and Dotson are truly tough competitors. HCBS is always preaching against his players being 'soft'. Those two are anything but soft and they proved it yet again.

2) Who is Agbaji? I hear he starts for KU but I haven't seen him in a while. Seriously, he was a non-factor on both ends of the floor except a few good buckets late in the 2nd half. That kid confuses me so much.

3) Is DeSosa going to play? He was eligible last night and Self said he has been active and doing well in practice. Seems like he just might be the odd man out of the rotation. I was thinking he might get at least a few minutes last night.

4) The type of team that would beat us in the tournament is a lightning hot, zone playing, 3-point chucking team. Think Syracuse in 2003 with a certain guard that will not be named. Other than that, I think we can go toe-to-toe with any team and grind out a win.

5) Injuries and chronic fatigue are big factors now. At this point in the season staying healthy and fresh is about as important as anything. I really dislike the BigXII tournament being so close to the NCAA tournament. In fact, I don't even like the tournament. We don't need the experience, it only wears us out, and we don't really gain anything from playing a team a 3rd time in a year. If we play Baylor in the final, it will be a slug fest. Both teams then have to turn around, recover, prep, practice, and travel to play a team on Thursday. That's not helpful.

6) Desmond Bane looks like he has really short arms. But maybe it's just an optical illusion because his biceps are so huge. Either way, it doesn't affect his shooting.

Silvio is not eligible until Saturday

Ah, I missed that. Do you think he will play much?

Finally, something positive about ESPN+ showing the post game senior night speeches and celebration of at least a share of the conference title; however, when I went to watch key parts of the game later on, the replay skipped about every 15 seconds and I could not get any continuity to the game. Never had that happen before, but this confirms one of my gripes in that we can't record, save and watch games later on with ease nor FF and RW and go slow-mo, nor keep the game for later on viewing.

The IMG radio post show was great also, as always.

Congrats to the Jayhawks for at least a share of the title. There's lots more to achieve and we have the team to make it happen.