Kansas guard Christian Braun (2) celebrates after hitting a three against Kansas State during the first half, Tuesday, Jan. 21, 2020 at Allen Fieldhouse.

An outstanding offensive night for the third-ranked Kansas basketball team ended with an ugly fight inside Allen Fieldhouse following the Jayhawks’ 81-60 win over Kansas State on Tuesday night.

Freshman Christian Braun exploded for a career-high 20 points off the bench and added a career-best six 3-pointers in the process, but a brawl that came just after the final horn sounded and spilled into the handicap seating behind the venue’s south goal overshadowed anything and everything that happened on the court.

“We should be in here talking about Christian Braun,” KU coach Bill Self said after the victory. “And selfishness definitely created a situation where that’s not going to be the storyline whatsoever.”

Instead, words like “embarrassing,” “inexcusable” and “disappointing,” were the primary talking points used by the two coaches who were the only representatives from either team to talk to the media after Tuesday’s game.

“What happened is absolutely zero signs of toughness,” Self said during his postgame meeting with the media. “It’s a sign of immaturity and selfishness more so than it is toughness.”

Asked what he thought the fan reaction would be to the latest incident surrounding his high-profile program, Self, who grew noticeably angry and disturbed when talking about how the brawl spilled into the stands, made no attempt to try to persuade people to look past it.

“If I was a fan watching, depending on what your perspective is, there would be nothing about that that would intrigue me to want to watch more,” he said. 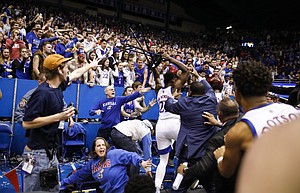 K-State coach Bruce Weber, who said he did not see the brawl because he was shaking hands with Self, said simply, “It’s disappointing it ended that way. Credit to them. They kicked our butt in so many ways.”

Leave it to one of KU’s two Kansas kids to spark another win over in-state rival Kansas State.

In front of the 299th consecutive sellout crowd at Allen Fieldhouse, Braun and the third-ranked Jayhawks rolled past Kansas State from start to finish in the 292nd edition of the Sunflower Showdown.

Braun, who hails from Burlington and went to high school at Blue Valley Northwest, was one of three Jayhawks to reach double figures on Tuesday.

In his first 6 minutes on the floor, Braun, who played just 4 minutes in last weekend’s win at Texas, scored 11 points, dished an assist and forced a pair of KSU turnovers to help the Jayhawks (15-3 overall, 5-1 Big 12) roar out to a 26-9 lead.

Braun entered the game at the 16:37 mark, taking the place of Isaiah Moss, who had been on the floor for less than 90 seconds after replacing starter David McCormack 2 minutes into the game.

Braun was far from the only Jayhawk to play well on Tuesday night. But he was the first.

In a first half dominated by the home team, Kansas hit five of its first nine 3-point shots, shot 46% overall and scored 18 of its 39 first-half points off of 11 Kansas State turnovers.

That included seven KU steals, two each from Braun and Devon Dotson and one apiece for Moss, Ochai Agbaji and Marcus Garrett.

Kansas State, meanwhile, shot 40% from the floor in the first half, was 3 of 10 from the behind 3-point line and forced just four KU turnovers.

The Jayhawks’ biggest lead of the half came just before the buzzer — at 39-21 — and the 39 first-half points were KU’s second most this season (46 at Iowa State) and broke a string of three consecutive first-half totals in the 20s.

Any hope the Wildcats (8-10, 1-5) had of a comeback were quickly dashed in the second half when the Jayhawks, again led by Braun, ripped off an 8-0 during the first 1:59 of the second half. 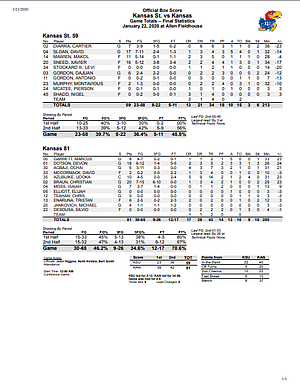 That run was sparked by Braun’s fourth 3-pointer of the night — after another Agbaji offensive rebound — and an easy put-back by Azubuike (10 points and 14 rebounds) and old-fashioned 3-point play from Dotson (18 points in 28 minutes), who fell hard to the floor after finishing the tough reverse layup.

That quick spurt to open the second half proved to be key for Kansas. After opening up a 47-23 lead just 2 minutes into the second half, the Jayhawks were hit by a 13-2 Kansas State run that forced Self to call a timeout with 14:03 to play.

Instead of the 11-point run pulling the Wildcats within striking distance, however, they still trailed by 13 at that point. The lead went right back to 15 out of the timeout when Moss (7 points on 3-of-7 shooting) hit a smooth jumper from the wing after a shoulder fake got his man in the air above the 3-point line.

Said Self of Braun’s performance on Tuesday: “He was the best player in the game.”

Can we get through one KU-KSU game without controversy?

This was a without question a low moment in Allen Fieldhouse history.

This is the second time this year. In the future Bill should instruct his players to not contest a play in the final seconds when the game is not on the line. Someone could have been hurt and now we've given them plenty of reason for revenge on the return match.

Huh? Which was the other one? I know bringing SnoopDog was an embarrassment to AFH.

Guard the ball to the end. No turnovers.

Great job, Braun! Keep firing those 3s, we need to amp up our scoring. I see the bright future of KUMBB right there.

Pretty simple where blame lies here. Silvio needs to hand the ball off to a guard to dribble out the clock. Silvio needs to let the block speak for itself and skip the taunting and standing over the K State player. Silvio needs to not pick up a chair as a weapon. Silvio and everyone else needs to recognize that a violent, chaotic brawl in the handicapped section is dangerous, selfish and simply disrespectful. McCormack needs to take a step back and maybe help diffuse the situation and not go into full on mob assault/stomp mode.

K State, plenty of blame and mainly to the player who first jumped in like it was a typical mob attack situation at a party or a bar closing let out fight.

Silvio, just give the ball to a guard and let them run the clock out.

All blame on KSU. Silvio did nothing that couldn’t have been handled by the refs on the floor. Guys steals the ball, gets stuffed and his teammate starts a brawl. Maybe you missed those key moments? Let’s see if Long stands up for his players better than kittycat Zenger did.