Despite rolling through the Big 12 schedule this season, one team has stood in the way of Kansas: the No. 1 Baylor Bears.

In what will certainly be a decisive result in the Big 12 regular season title race, the Jayhawks held on to take care of the Bears 64-61 Saturday afternoon.

After dropping the first matchup at Allen Fieldhouse 67-55 on Jan. 11, KU bounced back Saturday, snapping Baylor’s win streak at 23 games and grabbing another Big 12 road win.

And even though the Bears got off to an early 5-0 start, the Jayhawks bounced back with a quick 9-0 run to take the lead. KU never gave up the lead the rest of the first half, with Baylor going on scoreless stretches and missing free throws (8-for-15).

KU also was able to control the paint, led by senior Udoka Azubuike who paced the Jayhawks with 23 points, 13 rebounds and three blocks.

However, Baylor went on a late surge to cut the KU lead to 34-31 at halftime.

KU also led by as much as 11 midway through the second half, but the Bears took a stand with less than five minutes to play.

At the under-four timeout, Baylor cut the lead to 56-53, looking to take its first lead of the game since the 17:17 mark in the first half. 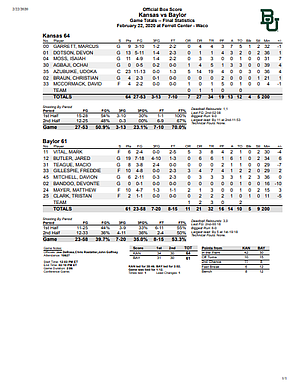 But KU managed to hold on for the win late and secure a tie with Baylor for the lead in the Big 12 standings.

KU was able to hold off a late Baylor comeback in the last four minutes.

The Jayhawks led by as many as 11 points in the second half, but a late Baylor comeback made things interesting down the home stretch. KU found its lead cut down to three with just a couple minutes to play, and it wasn’t perfect — KU committed late turnovers and Baylor hit big shots inside.

But the Jayhawk defense — led by Azubuike and Garrett — and made free throws down the stretch from Dotson and transfer senior guard Isaiah Moss sealed the narrow victory.

Near the end of the first half, KU was trying to hold off a resurgent Baylor team. And with 2:57 left, the Jayhawks went to their most reliable option inside — Azuibike.

Dotson received a pass on the wing from Braun. Dotson then received a screen from Azubuike, and as he dribbled to his right, Azubuike rolled inside. Once he saw the big man roll inside, Dotson threw up a pass that Azubuike slammed home over Baylor forward Freddie Gillespie.

Azubuike was once again a dominant force in the paint, shooting 11-for-13 from the field.

With Baylor and KU being two of the top defensive teams in the nation, it wasn’t surprising to see nearly every shot contested and ultimately a low-scoring game.

And it was Azubuike — the best player for KU on Saturday — who also had the defensive highlight.

Down 58-53 and needing a bucket, Baylor junior guard Mark Vital dribbled inside. Vital turned inside, but instead of an open look, Azubuike met him at the rim for a crucial block with his left hand.

It saved a basket and put an exclamation point for an impressive performance on both ends by Azubuike.

KU comes back home to play Oklahoma State on Monday. Tip-off is set for 8 p.m.

In related news, Bruce Weber and KSU are in last place one year after besting KU for the Big12 championship.

I’m glad we have Coach Self and that he doesn’t need to come here for coaching advice.

Check other older posts. Since when did we see pick and roll with lobs designed for bigs? Never hurts to listen to others. CEOs, presidents... they all have advisors. Just because someone is HOF, doesn't mean he doesn't need to read or listen to broaden his horizon and wisdom. That's called being humble.

Coach Drew perhaps doesn't get much respect he deserves - but did anyone see how happy coach BS when the game ended. That shows respect. Coach BS has to change his usual game plan to take back the B12 crown. That's determination!

Great game, a real final four type game. Ochai had a pretty rough game, that late turnover...good grief, and he was not alone. We got a bit sloppy there. Its good to see Coach can leave in Dok now under five minutes. We sure needed him.

Big “night?” Feels like it. I could use a Bloody Mary!

that was a big win! Azubuike and Garrett had HUGE games! Dotson had a good game. Moss had a good game. Ochai? ouch.......he seems to wilt against the best teams. that last turnover out of bounds was inexcusable......we had a timeout left....you don't just randomly toss it in at the end of the 5 second count and 'hope' our team gets it.....that could have been a turning point in the game, but luckily we hung on for the win. for this team to go all the way, Ochai has to be a lot tougher and more of an offensive threat. other than that, that was a fun game to watch! and Dok.....you controlled both ends of the floor...complete game big fellah! we needed you today and you produced big time!

I wish the tournament was starting next weekend because we are playing our best basketball right now. Is it possible for us to get any better?

Great win ......but we have to win out ...if we win out and baylor wins out we will be co champs how will seeding be determined for B12 tourney ......We will obviously will go back to no.1 come monday . What a difference a year makes ..... It did have that BIG DANCE feel....

My only fault with him was the TO in the closing seconds. Otherwise he played okay. Not great but not bad either.

Youre right Brock .....he was in Lawrence for sure