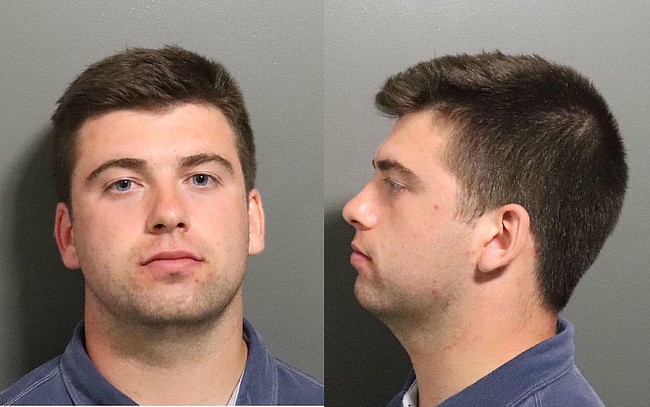 A University of Kansas linebacker charged after his arrest with two teen girls at a popular Lawrence bar has been granted a diversion agreement through the Douglas County district attorney’s office, court records show.

Two 17-year-old girls were also inside the business and “in possession of what is believed to be alcohol,” Sgt. Amy Rhoads of the Lawrence Police Department previously told the Journal-World via email. Barrett, 20 at the time, was charged with two counts of contributing to a child’s misconduct, misdemeanors. The girls were released to their parents, Rhoads said.

The specifics of the incident are unclear. The Journal-World requested the police affidavit supporting Barrett’s arrest, but it was not released.

In his order sealing the affidavit, Pro Tem District Judge James George wrote that Barrett’s charges are “inextricably bound” with proposed charges against two juveniles, and probable cause affidavits in juvenile cases are not released to the general public. He also wrote that disclosure of the affidavit would jeopardize the mental or emotional well-being of the two juvenile victims listed in Barrett’s charging document.

Through the diversion, the state will suspend prosecution as long as Barrett completes the yearlong agreement successfully. If he does, the state will dismiss the charges against him.

Barrett is to abstain from all drugs and alcohol, and he is subject to random testing for substances. He must pay the court $558 in fines — $158 for court costs and $200 for each of his two charges. He must also complete 50 hours of community service by March 31.

Barrett is listed as a sophomore linebacker from Cleveland on his Kansas Athletics bio page. He hasn’t seen much game action, but in spring of 2018 and 2019, he made the Big 12 commissioner’s and the athletic director’s honor rolls, the page says.

KU Athletics spokesperson Dan Beckler said via email Friday that the department “will handle it according to our internal policies.”