Gatto, others in NCAA basketball scandal sentenced to months in prison 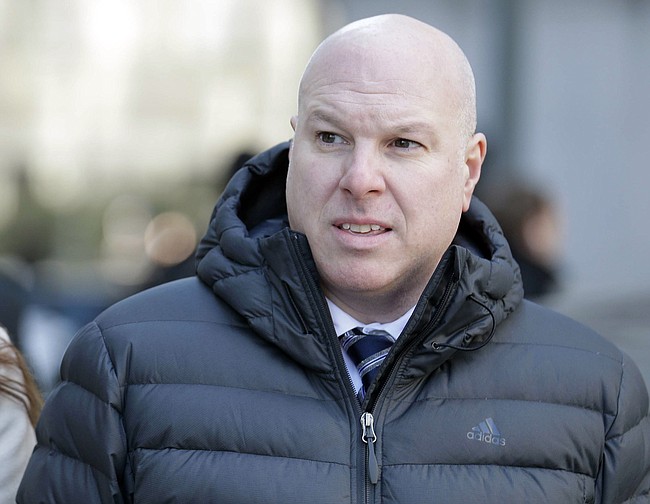 The three men who were convicted of fraud for their schemes in a college basketball recruiting scandal — which included the University of Kansas program — were sentenced on Tuesday to months in prison.

The judge said each could remain free until a federal appeals court decided whether to uphold their convictions.

Prosecutors in the Southern District of New York previously recommended a sentence of 46 to 57 months for Gatto and 30 to 37 months for Code and Dawkins.

However, prior to sentencing, Kaplan said he sympathized with the argument that the defendants were being punished when others who did similar things were not being prosecuted. Nonetheless, he said, "These defendants all knew what they were doing was wrong."

Kaplan acknowledged none of the defendants "took home a nickel" from the scheme, but said it was wrong to say there was no economic motive because each defendant's career stood to benefit.

The judge added that he wanted to send "a great big warning light to the basketball world."

"I deeply regret my actions," Gatto said in a shaky voice.

Dawkins referenced "social dysfunction" in college basketball and said his actions were "clouded" by a "system that takes advantage of kids."

"I realize now more than ever none of this was worth it," Dawkins said.

Code said he also regretted his actions but added, "Some things really got to be changed about college basketball."

In October, a jury found Gatto, Dawkins and Code guilty of fraud.

During the trial, testimony focused on KU coach Bill Self’s relationship with government witness T.J. Gassnola. Gassnola, a former Adidas consultant, testified that he paid the families of players to steer them to KU, including $90,000 to the mother of former KU player Billy Preston and $2,500 to the guardian of current KU player Silvio De Sousa. Gassnola testified that he never told Self about the payments. Gassnola is awaiting sentencing in a separate but related federal case.

The defense in the case argued that the coaches, including Self and KU assistant coach Kurtis Townsend, were aware of the payments to players. Despite the argument, the jury found all three men guilty of defrauding universities, including KU, by providing money to players’ families to push them toward certain programs.

The restitution requested by KU covers:

• $112,731 for two athletic scholarships and financial aid the university provided to De Sousa and Preston.

• $346,393 for legal fees the university paid in response to the NCAA investigating De Sousa and Preston.

• $308,472 for fees the university incurred to cooperate with the federal investigation of the Gatto, Code and Dawkins crimes.

• $289,886 for professional service fees the university incurred to respond to federal subpoenas related to the men’s crimes.

• $78,942 for fees the university incurred to prepare Jeff Smith, KU Athletics senior director of compliance, as a witness to testify and to have an attorney present during the trial.

As part of Tuesday's sentencing, Code and Dawkins are required to pay $28,261 in restitution to Louisville, according to a tweet from Adam Zagoria, a college basketball reporter covering the trial.

It's not clear how much, if any, money would be paid to KU. How much Gatto would owe in restitution has not yet been announced, according to Zagoria.

KU officials did not respond to a Journal-World request for comment.

Still feel for Silvio... $2500 and most of his college career was destroyed and lost. Sucks.

Blame that on his POS guardian Fenny.

Good thing courts are cleaning up big corruption like this. Maybe Hillary's $145 Million bribe from the Russians for 20% of America's uranium is next?

If only that was the case. But thanks to the liberal activist judges that have filled up our courts over the years and liberal control of our nation's law schools, our courts are as corrupt as Hill-Rod!

In a just world Hillary should be in jail and facing her in his cell would be tRump. I would pay to see that.

All the F B I agents are busy surrounding the homes of sneaker salesman and college kids. Way too busy one of the biggest scandals in the history of our nation. I sleep better at night knowing these mad dog killers are going to be locked up for months. Well done, F B I. (And tax money well spent)

Bee Bee, The FBI did arrest the U.S. Coastguardsman planning a terrorist attach so it seems they have their eye on the ball. But if you want to throw them under the bus because bribes, wire fraud and money laundering don’t meet your standards of relevant criminal activity, be my guest.

This is another stain of the reputation of the FBI, making up and prosecuting crimes. I have yet to see what the actual crime is, although I strongly suspect the root of the invented crime is embedded in Title IX, which is at the heart of the College Bball problems.

Right Suzi. Make sure we don’t blame people like Gassnola, Falmagne and possibly members of the KU coaching staff. Let’s blame law enforcement for doing their job. Give me an effing break.

So Spot on Dane. All sides of the aisle are guilty which is why no one will turn on or prosecute anyone. True of NCAA, the universities, the players, coaches and as well as FBI, Democrats and Republicans. I just wish someone would say "who gives a damn" and just prosecute them all. Make them all sing. Make them all lose their big salaries and pensions and live int he real world. Let's just start all over.

Of everyone involved in this, from high powered execs to agents to runners to parents/guardians to coaches.... the kid, Silvio, gets the stiffest punishment. What a profound injustice.

He's not part of the current commentary, because the FBI appears to not have looked that way, but he essentially lost 3.5 years because his mom took some money without his or his dad's knowledge. It's questionable whether he had any choice but to leave school after part of just one year.

At least Silvio has an option for his fourth year, brutal as it would be to sit out that long. I wonder if Coach is working something out for him to go to a protege's team/program in a lesser division so he can play, and come back for a senior year.

Stop calling Preston a former KU player. He never played in a real game for KU. As soon as it was discovered that he had received money, he never suited up for KU. They handled it exactly as it should have been handled.

And his mom is an idiot on the take.

He played in the exhibition games and helped Kansas beat Missouri in the Hurricane Relief edition of the Border War. That, in my mind, makes him a Jayhawk.

so did the judge rule on the restitution request?

The University has about as good a chance of seeing that restitution as LaGerald Vick has of reading at a 3rd grade level someday...not much.

Really? Why such a pissy, off topic, juvenile attack on one of our players that has personal problems. And it's ironic that you would make a 3rd grade jab at him, because that's about the maturity level of the comment.

Grow up or shut up!

I mean, it's not like we all don't know that it's true. Plus I was TOTALLY on topic and that was NOT a jab that a 3rd grader is capable of, that's a 9th grade jab AT WORST.

The Judge went soft because these guys need to find jobs so they can pay KU $1 million. They need to get back out into the work force and make good salaries.

I don't know if you can believe Gassnola, he has a criminal history. TJ also testified that a Maryland booster paid Fenny (Silvio's guardian) $60,000 to choose Maryland. When Silvio opted for KU, this Maryland booster wanted Fenny to pay him back (according to TJ).