Morgantown, W.Va. — The senior guard should have known better.

Playing in his 112th game at the University of Kansas and making his 57th career start, Lagerald Vick, by osmosis alone, should have picked up somewhere along the line a mental note about what to do when his team is down a point with the game on the line.

However, in the 4.9 seconds between Marcus Garrett inbounding the ball to Vick and the moment the most experienced player on KU’s roster rose up to shoot his shot at West Virginia on Saturday, the best basketball play to make didn’t appear to cross his mind.

KU’s chances of winning diminished with every Vick dribble once he crossed into the frontcourt, where he meandered over toward the left corner for a 3-pointer, when what the Jayhawks needed for him — or one of his teammates — to do was attack the paint and get a layup or draw a foul.

Vick had his eyes on some type of heroic jumper for a victory, and his intentions became so clear that 6-foot-10 Derek Culver stepped over to contest it, rather than stay with KU’s most talented player, Dedric Lawson.

Vick landed in a heap in front of the KU bench. Lawson rushed a putback attempt off the glass. The shotgun sound effects fired, cuing attendees in the crazed student section to storm the WVU Coliseum court and celebrate their team’s first Big 12 win of the year, 65-64. 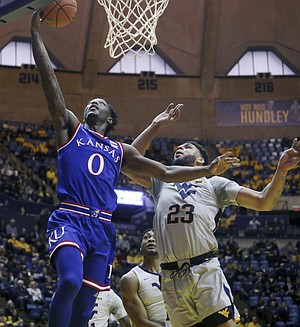 Kansas basketball coach Bill Self, who has undoubtedly gone over such late-game scenarios umpteen times throughout Vick’s four seasons in the program, didn’t call his starting senior guard out specifically. Instead, he fell on top of the grenade himself, stating countless times during his postgame press conference that he should have called timeout.

What made Vick’s last-second misstep even worse, though, was that KU’s previous possession also ended with the senior firing what could only be described as an ill-conceived 3-pointer.

With just more than 30 seconds to play, the No. 7 Jayhawks led on the road by 1, in a game in which they had not played very well. Vick saw 6-8 Mountaineers forward Wesley Harris guarding him in the left corner and decided this was a mismatch. Indeed, it would have been if Vick had opted to drive past Harris. Instead, Vick crossed over twice and pulled up for a 3 from the left wing, airmailing it long and to the right.

His first blunder in crunch time set the stage for WVU guard Jermaine Haley to score the game-winning basket. Haley, while not the 3-point shooter Vick is, put his team ahead with a tough-minded drive to the hoop for a go-ahead layup with 8.5 seconds to play.

Self didn’t mind providing afterward his assessment of the final two possessions of KU’s loss.

Self, instead, banked on a team with a senior guard on the floor playing out the final seconds the right way.

“I thought for sure we’d drive it,” he said.

Vick has seen enough winning plays from veteran KU guards the past few seasons to know what Self would want of him in that situation, with the ball in his hands and the WVU defense scrambling in the open floor to get back and defend.

Frank Mason III, Devonte’ Graham, Svi Mykhailiuk or Malik Newman would have forced the issue and attacked the paint with KU down 1, because that’s what the situation called for. The final minute of KU’s third road loss of the season served as a reminder that Vick’s still not on that level in terms of on-court leadership in pressure situations.

Freshmen Quentin Grimes and Devon Dotson and sophomore Garrett joined Vick in the starting lineup as usual, and comprised KU’s four-guard lineup, with Lawson inside, in the decisive final minutes, as well. 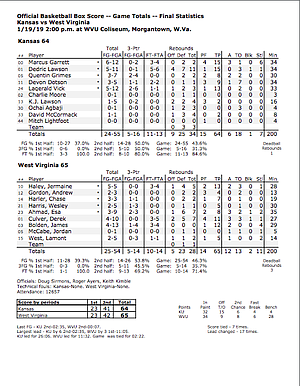 But Self didn’t think the youthful nature of the backcourt had anything to do with the game’s final moments going off script and down a reckless path.

“We had a senior with the ball,” Self said. “So that’s not the reason. I think you look at the turnovers (18) and unforced errors, you can say some of that may be attributed to inexperience. But not there at the very end. I don’t think so. It’s just the natural tendency that you’ve got eight and a half seconds left, you go downhill and make a play. At least, that’s what I would think.”

And that line of thinking led Self to keep a timeout in his pocket.

If Vick takes anything with him from the Jayhawks’ defeat, in which he scored 13 points on 5-for-12 shooting (2 of 6 from 3-point range), with three rebounds, two turnovers and no assists or steals in 33 minutes, it’s the memories of the game’s final two possessions.

And the knowledge that he’s capable of far better the next time the Jayhawks find themselves down 1 with the ball in the final seconds.

No timeout would've been needed had the team trusted each other - had the team been coached how to make the right decision, how to quick reacting to this kind of situation. Next game in the same situation, the problem will still be there even had coach BS called a timeout. Guaranteed. He needs to change his offense strategy BADLY. Been saying this, especially with a team roster like we have right now. Our offense efficiency is waaaaay down down at the bottom of the sea. How many times we see opportunities to pass to Dedric after a pick and roll or after a swift spin-move when he's established a position, but our guards are just busy passing to each other outside the perimeter...? So freakin' frustrating watching them playing like that. Dotson would rather kick the ball out rather than bounce pass to KJ that's left by his man by the basket... SMH.. Unfbelievable... Go watch that tape again and again. A lot of easy buckets could've been made.

One of my criticisms of Coach Self is that he doesn't take enough blame when his teams lose. Today, however, he admitted that he f***ed up by not calling timeout. So props to him for falling on the grenade today. If there's any positive to take from this loss, it's that Coach Self was humble enough to take the blame for this debacle.

At least they got a shot off, two actually albeit not a good one. Against Arizona State they couldn't even do that.

Considering the recent problems during the closing moments in other games, it was pretty surprising that Self did not call a timeout. I agree with Bryce that Self deserves some kudos for stepping forward on this one.

What...there are about 20 teams tied at 4-2 for the conference lead! A record of 12-6 just might be good enough to tie for a title considering the parity in the league this year.

PS. Could the term "parity" in the Big 12 this season be considered another term for 'mediocrity"?

PSS. It appears that going 9 - 0 at home is no longer desired but rather absolutely required to have a chance at the title this season!

PSSS. If Bill would have called time out, the way this team closes out games, we would have probably turned the ball over and, like the ASU game, not gotten any shots off as well. I have no problem going with the game flow and try to win it there!

When I think about the best conferences in the NCAA, I usually think about championships. The BIG12 doesn't have very many and hasn't had one since 2008. If you want to look at conference versus conference play, it's more about matchups than pairing teams solely on wins and losses. Kansas versus Vanderbilt just doesn't sell nearly as well as Kansas versus Kentucky.

I was really getting PO when Vick kept dribbling so much on that last possession. He gets the ball stolen from him a lot and I was worried we would not even get off a shot. As many games as he's won for us, that one was not one of his better moments. No doubt Dedric could have gotten a better shot (his put back, off balance, was better) and probably drawn a foul. Just a lapse in thinking by Vick.

I thought of buying dribble cups that can be attached to the ears and sending a case to the team.

What happened to crisp passing and moving the ball around? Dotson, more than anyone, needs to drive to the rim and make plays. We don't have the ability to shoot over just about any zone worth a damn and we always seem to dribble in and pass out. I kinda think this team is soft.

I'm tired of Vick underperforming and feel bad for Garrett, what a game! Outside of Dedric & Garrett, it felt like nobody cared whether we won or lost.

I don't think it's fair to single out Legerald. This team has had difficulty closing out games on numerous occasions and it has not always been because of LV. Lack of ball control, free throw shooting and suspect defense by more than one member of the team has put them in peril.

Some of the late game closing moments across the entire league are a byproduct of James Harden and Steph Curry. Their uncanny ability to hit the step back and contested 3-pointer has influenced players across all of basketball. I think what players fail to realize is that these guys also get to the line 20 plus times per night driving to the hoop (but those never make the highlights). Props to HCBS for admitting a timeout should have been taken. Hopefully the team realizes a drive to the hoop or Lawson in the post was a better option. If we were down 3, I would have been much happier with Vick taking a corner 3 pointer.

Yeah, LaG’s handles aren’t that great so maybe a 3 vs a drive was better for him.

Vick is hard to coach...you never know what he is going to do..and that makes great chemistry as a team harder to achieve...but Coach is a Master at these kinds of puzzles...

Here's an idea Benton and Matt... how bout a story on Lawson who rarely shows up in the first half of games to set the tone. We have a young team. He could be doing more in that regard. If you're gonna single out Vick, be balanced and call out Lawson.