The secret behind the Mitch Lightfoot locker room photo that surfaced following Tuesday’s final day of Kansas basketball boot camp has been revealed.

Yes, Lightfoot, a junior who is preparing for his third Late Night on Friday, has gotten bigger — and at the same time leaner — through months of hard work and dedication in the weight room. Talking with reporters on Wednesday, Lightfoot said he’s up about 15 pounds from his end-of-season playing weight of 209 pounds to his most recent weigh-in of 224 pounds.

And, yes, a good chunk of that added muscle has come in his upper body — chest, neck, biceps, etc. 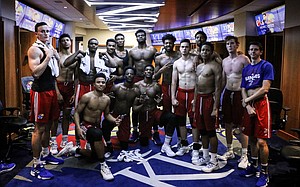 But are Lightfoot’s guns these days actually as big as they looked in that photo?

“It was just after boot camp and I was kind of gassed so I was hanging on the towel,” a laughing Lightfoot said on Wednesday before stating, “Not really,” when asked if he thought the flex heard around the world would become such a wild phenomenon.

“It was a great boot camp,” Lightfoot continued. “We got a lot accomplished, the team’s come together and I think we’re in a whole lot better shape than we were when we first started.”

Kansas freshman David McCormack, who recently completed his first boot camp — calling it “definitely the hardest thing I’ve gone through” — said he absolutely had noticed his new teammate working his butt off since arriving on campus in June. But he was not about to give Lightfoot a total pass on the posed photo.

“(It’s) a little bit of both,” McCormack laughed. “It was a bit of a flex there, but he definitely has been putting in a lot of work in the weight room. He’s really dedicated to putting on muscle and changing his body.”

KU coach Bill Self, as one might guess, said he had not seen the photo of Lightfoot flexing, with the rest of his ripped teammates celebrating the end of boot camp around him. And Self was a bit confused on Wednesday about why he was fielding so many questions about Lightfoot’s physique.

“They’re all in good shape,” said Self, who, just four weeks ago deemed his team’s conditioning to be “awful.” “Why you asking about Mitch?”

One reporter then explained that Lightfoot had just met with the media and the photo was one of the topics that came up.

“Oh, I didn’t see the picture of him flexing,” said Self, clearly preparing for the jab that was to follow. “And, to be honest with you, I don’t think that that picture will help us win one game, nor will it intimidate any opponents. I can guarantee you that.”

In addition to trying to fit in with the massive bodies around him in KU’s new-look front court, Lightfoot said the motivation behind his personal transformation was born at the end of last season.

“I think, when I realized it was during the tournament last year, when we were playing against all those bigger guys like Seton Hall, with (Angel) Delgado and guys like that,” he explained. “I kind of realized that where I was at that point in time wasn’t going to get me to where I wanted to be.”

“I feel a lot stronger,” Lightfoot said, noting that the body transformation is worth more than his new appearance. “Improving strength in the weight room, on the court, helps me a lot to be bigger and make plays I couldn’t have made otherwise made.”

Lightfoot's new look, along with that of the rest of his 2018-19 Kansas basketball teammates, will be on display on Friday during the 34th annual Late Night in the Phog celebration at Allen Fieldhouse.

For a handful of KU newcomers, Friday will be their first experience with the madness that is Late Night, which, this year, KU officials confirmed on Wednesday, will feature Grammy-winning rap star 2 Chainz as the musical guest.

For Lightfoot, however, the whole Late Night experience will be nothing new. But that does not mean he'll treat it that way.

"You still have to pinch yourself every time you walk by the (Allen Fieldhouse) lawn going to class and the gates are set up and it's just that time of year," he said. "I think everyone's excited for, obviously, the basketball, but we've got 2 Chainz and all that different stuff going on. I think it's going to be a good time."

This guy's attitude is just incredible. I hope get gets to get play for pay one day but, no matter what happens, he's going to be a great success in whatever field he chooses.

Pwrhaps this is obvious, but I don’t think you can when a championship without a dude like Mitch in your program. Great basketball savvy and willing to play whatever part the team needs. He’s definitely gonna help make the younger bigs better whether or not he’s playing meaningful minutes from game to game.

Perhaps this is obvious, but I don’t think you can when a championship without a dude like Mitch in your program. Great basketball savvy and willing to play whatever part the team needs. He’s definitely gonna help make the younger bigs better whether or not he’s playing meaningful minutes from game to game.

Unless one of the bigs gets hurt, he'll see little playing time. It's a shame because we'll never really get to see what he could do. Love his attitude.

I like Mitch's guns, but look at Doke's physique!