Kansas' Peyton Bender (7) passes the ball down field during the first half of an NCAA college football game against Texas Tech, Saturday, Oct. 20, 2018, in Lubbock, Texas.

A lack of change actually represented a shift in one offensive approach for the struggling Kansas football team in Saturday’s road loss at Texas Tech.

For the first time this season the Jayhawks navigated an entire game started by Peyton Bender without rotating the quarterback from Fort Lauderdale, Fla., in and out of the lineup or going away from him completely. A senior, Bender, as planned, returned to the starting lineup for the first time since KU’s Big 12 opener at Baylor, and, unlike in his previous four starts, didn’t watch another QB take a snap, let alone handle an entire series.

Plus, according to KU head coach David Beaty, sophomore Miles Kendrick, who played as a substitute in each of the team’s first four games before suffering a shoulder injury at BU, was available at Texas Tech.

So what led to Beaty sticking with his starter, who ended up throwing 23 incompletions on 41 attempts? 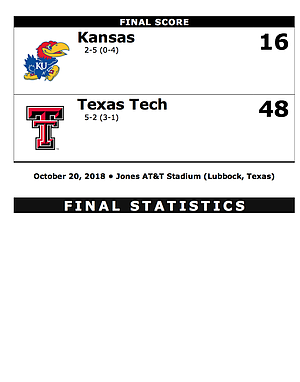 “Throughout practice he definitely, definitely showed the best grasp of what we were doing obviously,” KU’s fourth-year coach said of Bender.

“And not that the other ones didn't, but he was definitely into it. We were very confident in him. We still are. Still very confident in him,” Beaty added, following a 48-16 road loss to the Red Raiders. “He'll continue to improve and get better. There's no doubt about it. I think that kid has got a lot more resolve than maybe people give him credit for. A lot better leader than what people give him credit for.”

It marked the first time only one QB played for KU since redshirt junior Stanley hit on 24 of his 32 passes for 247 yards and three TDs against Oklahoma State.

KU went away from Stanley before the end of the first quarter in its previous loss, at West Virginia. So the Jayhawks (2-5 overall, 0-4 Big 12) staying with Bender seemed particularly surprising due to his early struggles in Lubbock, Texas. He connected on his first pass attempt only to throw incompletions on his next six in the first quarter. In the second, he went 6-for-14 through the air, and KU only had 60 passing yards on his 21 throws at halftime.

Earlier this season, when Bender completed seven of 11 passes for 68 yards in the first half against Rutgers, he didn’t take a single snap in the second half and Kendrick replaced him as the primary QB.

Bender told the Journal-World following the loss at Texas Tech (5-2, 3-1) he didn’t know beforehand whether Beaty and KU’s offensive staff would have him play the whole game or bring in substitutes.

“Didn’t really know what the coaches’ mindsets were with that. They pick a starter and you’ve just got to be ready,” Bender said. “I just wish I would’ve got into a groove earlier on in the game. For whatever reason just kind of missed some throws. It’s unacceptable and I’ve got to be better.”

A lack of execution, on this day at least, wasn’t enough for Beaty to bring in backups Stanley or Kendrick. 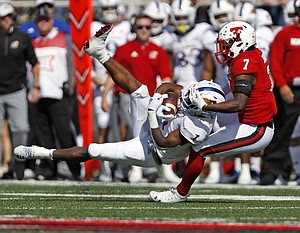 “The other ones were ready to go,” insisted Beaty, who handled play-calling for the first time since firing former offensive coordinator Doug Meacham. “That's what you want to see as a coach. We’ve just got to play better.”

In the third quarter, Bender’s 6-for-11 passing netted 78 yards and a touchdown, which came on the quarter’s final play, a 4th-and-7, 30-yard pass that found a covered Steven Sims Jr. at the goal line for the offense’s first TD of the day.

In the fourth, Bender was intercepted in the end zone and went five for nine for 83 yards (44 on one throw to Daylon Charlot), with a late TD toss to Stephon Robinson.

“He fixed his mistakes,” sophomore KU receiver Kwamie Lassiter said of a relatively better second half from Bender. “And that’s what you’re supposed to do — come in at half and fix your mistakes. So seeing him fix his mistakes and make the right reads and get it to the guys that were open, that’s big.”

Bender, though disappointed in his performance and what it meant for the offense, left the loss hopeful some of the late-game positives and being given the chance to play all four quarters will help him in the long run.

“The more you play the more comfortable you get. Unfortunately it was just a little bit too little at that point,” Bender said of his most on-target passes in the second half. “The game was out of hand — I wouldn’t say going into the fourth, because what was it, 27-9?. We’ve just go to capitalize better on those opportunities and execute better throughout the game.”

I probably would have applauded this logic like say 3 years ago...

Here's the thing, at one point yesterday Bender was 7-21, not all of it was on him. Receivers dropped passes, ran wrong route or just weren't looking when pass was thrown. But Beaty would never have allowed Carter to keep going. But with Bender he bends over backwards to make excuses for Bender. Carter has a productive day, Beaty says he'll look at film. The only thing Beaty is doing is alienating his players. Don't be surprised if Carter transfers. I'm not saying Carter is so much better than Bender, but Bender is a cinder block back there, whereas Carter can move. Idk why Beaty has this mindset, but it is not helping anything. He's showing his players that it's not about production, It's about something else.

You must have watched a different game than I did. I saw at least half a dozen passes that were either overthrown, behind of or in front of receivers. Bender just didn't have it yesterday.

As far as second half stats....how many of that came in the last drive against a very soft Tech prevent defense?

Yes l saw that those things as well. So it begs the question of why Beaty has such a quick hook with Carter but Bender gets all the time in the world to be horrible lol.

Hopefully Beaty is fired tomorrow! Once he is fired I will be buying tickets to the TCU game! Not really sure what's worse watching him call plays or watch him use timeouts. It's time to let him go back to being a wide receivers coach!

"“He'll continue to improve and get better. There's no doubt about it." -- Beaty

1). Does he really believe that a Sr. QB is going to swallow some magic potion with only a handful of games left?

2). Does he really believe he's fooling Jayhawk fans with that kind of stupid logic?

3). Does anyone...anywhere...doubt his complete animus,..for whatever reason... to playing Carter Stanley?

4). The Jayhawk players have been dutiful soldiers following this inept leader. Does anyone really believe that after the Tech disaster the players still respect and believe in Beaty?

Might as well let him play. So this is his last year. Why prepare for the future? I won't be here.

Simple: Beaty likes Bender and dislikes Stanley (a lot), and I don't know why, but i'm sure in practice he does things that irritates Beaty. Kendrick was the next one up, but is not healthy enough, and I believe that if Long was smart, he is preventing Kendrick from burning a redshirt. If Kendrick plays one more down his redshirt is burned (I don't think Kendrick has used a redshirt). Personal belief.

If a person can understand this great mystery then that learned individual can try to answer the next great question, why is Kansas Football so bad?

It has to do with the people running it. Mangino and Mason both showed what they are capable of, and is Ames such a hot recruiting ground? There is no reason why KU should be this bad.

Beaty is an idiot. I was really hoping to wake up today and find out Beaty had been fired. What are they waiting on? He's clearly a dead man walking. AD Long is just pissing people off.

I only seen one dropped pass by a receiver (didn't watch the last half of 4th quarter) Bender continues to throw the sideline pass well out of bounds.....he's terrible....what's worse is we still only have one recruit for next season...the new coach will have no choice but to go the jr college route.

You shouldn't be able to count 2nd half stats when your down 20+ points. They are meaningless.

Once again, the opposing team eases off on us in the 2nd half. Bender must be a good QB in practice, but it sure doesn't transcend to the game.