Self: Jayhawks hoping to have Azubuike available in ‘emergency’ role Thursday vs. Penn

Kansas head coach Bill Self talks with media members at the Hotel Ambassador upon the Jayhawks' arrival in Wichita on Tuesday, March 13, 2018.

Wichita — Two more days of seeing sophomore center Udoka Azubuike on the basketball court has Kansas coach Bill Self “encouraged,” but Azubuike's status for Thursday's NCAA Tournament opener against Penn remains up in the air.

“I'm encouraged. I really am,” said Self shortly after the Jayhawks arrived at the team hotel in Wichita on Tuesday night after practicing in Lawrence and eating a team meal at Chester's Chophouse in Downtown Wichita. “And I'm not being overly optimistic. He's been on the court the last three days. Today he ran on the court and stopped and started and changed direction and things like that. But (he's) still not 100 percent.”

Because of that, along with the slim chance that Azubuike will be able to practice in full before Thursday's 1 p.m. tipoff with Penn at Intrust Bank Arena, Self said the best the team could hope for would be to have Azubuike as a deep option against the the 16th-seeded Quakers. 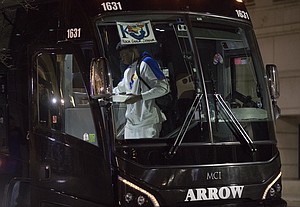 Kansas center Udoka Azubuike gets off the bus outside the Hotel Ambassador in Wichita on Tuesday, March 13, 2018.

“I've never liked playing guys before they've practiced when they're coming off an injury,” Self said of Azubuike's Grade 1 MCL sprain in his left knee. “They say it's one of those things that it can get a lot better in a short amount of time. So our hope is that he could be available Thursday in (an) emergency-type situation. But the reality of it is he's probably not going to be able to practice before Thursday.

“But if he can be available maybe on Thursday and then practice on Friday, we could hopefully have him for some extended minutes on Saturday, if we're able to play.”

While the Jayhawks are still a double-digit favorite over the Ivy League champions, Self said the past couple of days of watching film on Steve Donahue's team revealed an extremely talented group.

“I was really surprised when they showed up on the 16 line and after watching them, surprise went to anger because they're not (a 16 seed),” Self said. “They could beat us. They could. They've got good enough players, they can really shoot it, they defend extremely well, don't give up easy baskets and don't give up 3's.”

Self said he watched four or five regular season games, all of Penn's Ivy League tournament contests and all three games against league runner-up Harvard, which finished with a 1-2 record against the Quakers this season and had a point differential of +3.

Each game tape showed a disciplined, poised and talented team that Self said would remind most people of what typically comes to mind when people think of Ivy League teams in the NCAA Tournament.

“A lot of dribble-at back cuts, a lot of screen-away back cuts, a lot of things that nobody in our league does,” Self said. “It's a quick prep, but, yeah, they have our attention. … They're good. There's no other way to look at it. They're balanced, they can shoot, they can handle, they're obviously not going to get rattled and they've got two bigs, or enough bigs, that they can certainly defend our low post. If we had Azubuike, maybe we'd have a little bit of an advantage from a size standpoint, but I'm not sure that we'll have him available enough to make a difference.”

With Azubuike's status in question, the onus inside once again figures to fall on young forwards Mitch Lightfoot and Silvio De Sousa.

That duo combined for 46 points and 40 rebounds in three games without Azubuike last week at the Big 12 tournament in Kansas City, Mo., and Self said both would have to play big again against Penn, particularly De Sousa, who, at 6-foot-9, 245 pounds, comes closest to filling Azubuike's 7-foot, 280-pound shoes.

“We need him to play confidently,” Self said of De Sousa. “We need him to play well. But he was so good. After watching the tape against West Virginia, he was even better than what I even thought during the game. He got a lot done and he did some little things that were really, really good. What he's got to do though, is he's got to be the best rebounder on the court.”

In addition to practicing off site, the top-seeded Jayhawks (27-7) will run through an open practice at Intrust Bank Arena from 12:30-1:10 p.m. today.

Self said the Jayhawks practiced at 1 p.m. Tuesday in preparation for the 1 p.m. tipoff on Thursday.

Jayhawks Arrive in Wichita for NCAA Tournament by KUsports.com

1] Bill Self coach speak "They could beat us. They could." translates even without Dok, if we don't beat them by 15-20 points, I'll be pissed!!

2] If we can beat 2 Big 12 teams that are in the NCAA and one that should have been, without the big guy, Penn should not be a problem and Dok will get two extra days of rest.

3] I believe that Langford is holding back his commitment because he is waiting to see what Newman does after the season ends!

4] Next season Bill, should redshirt McCormack and the KC kid, with Dok, Silvio, Lawson and Mitch up front and Garrett, Vick, Moore, Lawson, Grimes and Dotson and maybe Langford at the back he should have plenty of firepower even if Sam and Malik leave.

5] My guess we will beat the crap out of Penn and the network will switch to other games so we will be lucky to see half of the action.

1) If KU isnt up by at least 20 at halftime KU nation as a whole will be pissed..IDK if Penn is the best 16 seed, 16 seeds are suppose to get slaughtered, those are thr unwritten rules LOL 2) agree 3)that is possible..but Id rather have a Junior Newman than a freshmen Langford 4)if anyone gets redshirted it might be the KC and Lightfoot..I cant see any ranked incoming freshmen being asked to redshirt and not play his first season 5) Id be perfectly ok with that 6)I hope the score is more like it was in last years 16 seed game

Don't forget about Holy Cross. I believe we only won by 11 and it was a lot closer than that throughout the entire game. That was also one of our best teams ever and we destroyed everyone else in our path on the way to the final four (where we lost to the champions that year).

You mean "Holy Cr@P!" I remember Bob Davis as I was listening to that game, "...The shot is good, halftime is here, and Holy Cross has a four point lead." The game wasn't televised, but I was there next to my computer listening to the stream, screaming my head off as the game wound down. Roy told his team, "You gotta dig deep," during halftime.

With the games on 4 channels now, they no longer switch to other games.

Any way to automatically block posts like the one from Asad above? Love this site and hope we don't have to start putting up with this kind of stuff. Thanks!!

You have to flag it immediately, suggest it for removal. They usually take it down w/in an hour.

I agree 100% with you Gary. In fact his father in law can't be that smart since I did the same program and I just bought a Lambo! LOL Jayhawks by 20!

Chester's Chophouse is ~10 miles from downtown Wichita, unless they've got a secret second location.

So long as we can win w/o him, keep him out tomorrow, maybe even a good bit of Saturday. Don't want to reinjure him, or ruin his knee regarding his NBA future either. If Mitch & Silvio play well tomorrow, we can beat Penn inside 80% of the time I'll bet.

wish we had Dok now. I really dislike these 1-16 match ups and want them out of the way fast.

Keys to the game:

1.) Smother Penn on defense and make them work for EVERY shot. This game was set up for a potential upset and we cannot give the KU haters what they want.

2.) Make smart shot decisions by not forcing and make your free throws.

3.) Go down low to Silvio as he's proven he can score. This will open up pandoras box to an easy win.

And before the game I'd say, "Is this your last game of the year? Because there are a lot of people out there that think so. Let's prove them wrong, again. Clear eyes, full hearts, CAN'T LOSE!'

I'll be surprised if Udoka doesn't play on Thursday. Give him some time playing on the ankle and get his confidence up.

I didn't realize that there were 3 different levels of sprains but Udoka fortunately only has a level I which often players will play through it happens during the game but at 7 foot 280 pounds, I understand the caution.

I tend to agree. Even if we don't need him I think that I would want to get him out there for a few inconsequential minutes at the end of the game at least to let him get his muscles loose let him feel what it's like to go full speed on his sprained knee and with his new brace, then send him straight back to the training room for treatment.

In Keegan's column with the Orthopedist he indicated that you want to keep working the joint to get it warmed up and loose. I would think that it would be good to warm up the joint briefly each day and then ice it afterward to keep the swelling down.

Yes the holy cross game was close. However, one minor detail our all-American point guard and leader of team got injured in the first half( Kirk Hinrich) and we only had a very young inexperienced PG (Aaron Miles) to back him up.

Still, Penn does look like a tougher 16 than most. But than again, they have played one team in the top 25 this season ( Villanova) and lost by 28 points. It's easy to have inflated stats against lesser competition. Their 3 point defense doesn't scare me as much as people are claiming it. Newman, Svi, and Graham can all get to the basket if they really wanna hover on the perimeter that much. Plus Silvio and Lightfoot will present matchup problems for them as their tallest player is 6'7" or so.

Really my concern is us on the defensive end. We have bad defensive stats, especially for a Bill Self club. Adjusted defensive efficiency we rank 46th per kenpom.com Other championship caliber teams rank high in both offense and defense typically. Michigan State for example is 9th in both categories.

Playing defense against an unorthodox offense we really haven't played all season concerns me. We should be able to outscore them easily, but down the road, our defensive woes may catch up to us.

Just take care of the ball and play with purpose and passion, we should be fine for this one.