‘Gritty’ No. 16 seed Penn ready to defend 3-point arc versus Midwest No. 1 Kansas

On a whirlwind of a Sunday for the Penn basketball team, head coach Steve Donahue had a lot on his mind as he watched the NCAA Tournament selection show.

Just hours after his Quakers earned their program’s first invitation to the Big Dance since 2007 with a 68-65 win over Harvard in the Ivy League Tournament’s championship game, Donahue watched with anticipation, thinking Penn (24-8) could nab a 15 or even a 14 seed.

Instead, Penn appeared on the Midwest region bracket as a No. 16 seed, meaning a first-round matchup with top-seeded Kansas awaits the Quakers in Wichita on Thursday.

As Donahue processed it all, he soon found himself reflecting on his time as head coach at Cornell, when he faced Bill Self and the Jayhawks inside Allen Fieldhouse in 2010.

“It was a great basketball game and memorable for our guys for sure,” Donahue said during a phone interview with the Journal-World, referring to a 71-66 KU victory that wasn’t decided until the game’s final minute.

That Cornell team went on to advance to the 2010 Sweet 16, thanks to one of the most efficient offenses in the nation. Donahue said his offensive philosophy hasn’t changed since then. 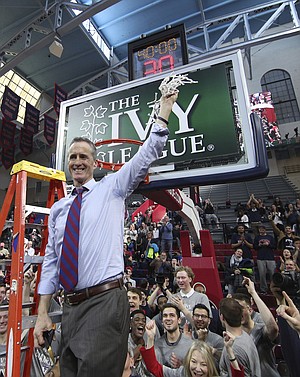 “My teams have always spread (opponents) out and shot 3s, tried to be efficient in terms of taking shots at the rim, foul shots and stand-still 3s,” the third-year Penn coach explained.

His 2017-18 Quakers don’t look much like Donahue’s best Cornell team, though. According to sports-reference.com, the Big Red led the nation in offensive rating that year. This season, Penn ranks 142nd in that category.

“We had a lot of shooters on that (Cornell) team,” Donahue said, before sharing what has fueled Penn’s success. “We’ve got a tough, gritty team that really guards, limits teams to one (shot), shares the ball and takes care of it. We’re not nearly the team that Cornell was shooting, but we guard a lot better.”

A 6-foot-5 guard, sophomore Ryan Betley leads Penn in scoring (14.4 points per game) and has connected on 80 of 206 3-pointers this season (38.8 percent). Another sophomore, 6-foot-8 forward A.J. Brodeur, averages 13.0 points and 7.0 rebounds and was a unanimous selection for the All-Ivy League first team.

True, their individual offensive numbers won’t blow anybody away. But Donahue said it’s the Quakers’ collective defense on the perimeter that makes this team go.

Penn enters its NCAA Tournament meeting with Kansas (1 p.m., Thursday, TBS) with the second-best 3-point percentage defense in the nation — opponents have made just 28.9 percent from behind the arc versus Penn.

The former Boston College and Cornell head coach hopes that stingy number will translate this week and give his players confidence as they face a Kansas team that ranks 13th nationally in 3-point percentage (40.3 percent) and 20th in 3-pointers made per game (10.1).

“We have some really good, physical guards, so we don’t get beat off the bounce very often and give up that drive and kick,” Donahue said.

Penn’s defensive rebounding percentage (78.2 percent versus Division I competition, per teamrankings.com), Donahue added, keeps the Quakers out of many scramble situations in which an offensive rebound sets up an open 3-pointer.

“And lastly, we do a really good job getting back in transition,” the coach said. “So that’s something we really try to win — the battle of the 3-point line.”

Penn won the two-day, four-team Ivy League Tournament, in part, by holding Yale to 5-for-25 3-point shooting Saturday and limiting Harvard to 7-for-18 success from long range.

Who has Penn played to account for holding opponents to less than 30% shooting from 3? And have they faced a monster like Udoka or a rising star like Silvio?

We should win this game by at least 14 points.

I did notice the ESPN computers gave Penn a 6.8% change to win, all the other 15 and 16 seeds had less then that. So I think that means this may not be easy, even if you see they got smacked by Villinova.

It sounds a little surprising that they are a 16, and those numbers validate it. Shouldn't make a difference. We've won games attacking the basket and not shooting 3's.

Ivy League teams are almost very tough ots in the NCAA Tournament, and have beaten may a high seed before. So if Kansas takes the Quakers lightly, they could find themselves in a real fight.

Penn didn't play a very difficult non conference schedule. It only facd one ranked team (Villanova) and it lost that game by 28 points.

But I've seen far too many Ivy League teams upset major conference teams in the 1st and 2nd rounds of the NCAA Tournament to take any team from that conference lightly.

As a Philadelphia native, I'm not happy about this matchup, because I grew up going to games at the Palestra cheering for all the Big Five teams. Villanova & Penn were always my favorites. So I was looking forward to cheering the Quakers on in this tourney. Now, I can't.

Gritty? Usually we describe Ivy League guys as they are heady or play smart. Now i'm worried like the rest of you peeps.

Donahue's Cornell teams were tough. He's a heck of a coach.

I thought that Cornell game at the Fieldhouse was more like the '04-'05 season. I vaguely remember a freshman Russell Robinson getting a key steal to seal the game.

Watching Penn beat Harvard, you can't say there isn't any chance of losing but realistically, this shouldn't be very close.

You can never take an Ivy school for granted. Kids playing without scholarships, usually upperclassman who've played together for 2 or 3 years and every once in a while, they slay a giant.

Penn will be a tough fight. i actually watched the Ivy League Championship. KU should keep them at arms length and stretch it out at the end with made free throws, but it won't be a runaway.