If Kansas center Udoka Azubuike is going to follow up his fabulous, 120-slam, sophomore dunk-fest by reaching triple digits in dunks again during the 2018-19 season, he’s going to have to make sure he’s ready to catch the ball from at least one different position — the 4.

So far, so good in that department, though redshirt junior Dedric Lawson recently said some of his passes still catch the KU big man off guard from time to time.

“It’s been going real good,” Lawson said last week at Washburn basketball camp in Topeka. “But last year, Udoka didn’t really have someone from the 4 spot to feed him the ball, so I’ll be throwing it to him and he doesn’t expect it but he’s still catching it. He’s like, ‘I’ve got to get used to it,’ and I tell him, ‘You’ll get used to it because I’m throwing it to you.’” 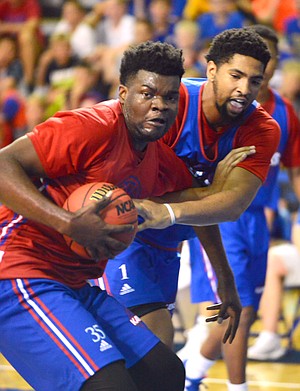 Kevin Anderson/Special to the Journal-World

Red Team center Udoka Azubuike protects the ball from Dedric Lawson during a scrimmage on Wednesday, June 14, 2017 at the Horejsi Family Athletics Center.

Kansas basketball coach Bill Self has talked plenty this offseason about the likelihood of the Jayhawks going back to a lineup that features two big men after departing from that tried-and-true strategy during the past two seasons.

So the KU big men themselves have been trying to figure out the best way to play together.

By all accounts, that won’t be a problem for any of the five forwards and centers on the 2018-19 Kansas roster, and Self and company will have the luxury of mixing and matching the pieces to find combinations that click.

Azubuike and Lawson — who will be joined up front by Silvio De Sousa, Mitch Lightfoot and freshman David McCormack — represent two of the most intriguing options and also are the two players most commonly projected as starters in KU’s frontcourt next season.

Slowly but surely, that duo is starting to find its footing.

Last week, while working the Washburn camp, Lawson broke down the dynamic of playing next to one of the biggest men in college basketball, a teammate he called “a once-in-a-lifetime type of player.”

“I think it’s going to be great,” Lawson said. “He kind of reminds me of like Shaquille O’Neal, how he finishes around the basket. I’ve never played with a guy like Udoka.”

The playing “with” portion of that statement might very well be the biggest key in the partnership between these two KU juniors.

At 7-foot, 274 pounds, Azubuike takes up a lot of space, throws around a lot of weight and uses every inch and ounce to his advantage.

At a slimmer 6-9, 230 pounds, Lawson is a little more mobile and versatile and does not need to be as close to the basket to score.

According to sophomore K.J. Lawson, who has seen plenty of his brother’s games during their basketball playing lives, those varying strengths, in fact, should allow the two to fit together very well when the 2018-19 season rolls around.

“It’s going to be great for both of them,” K.J. Lawson said last week. “They’re different types of players and they won’t be in each other’s way and they look for each other. The chemistry’s already there because we’ve been here a year and you see how people play. It’s going to be a great pairing.”

Used to being at least one of the tallest, if not the biggest, players on any roster he has been on, Dedric Lawson said he was ecstatic about being on a team loaded with the kind of frontcourt depth that will allow him to fill a number of different roles.

“It’s going to be a real advantage to play with a big like Udoka,” Dedric Lawson said. “I think it’s going to free up both of us from the standpoint that they can’t double both bigs and it’ll give Udoka room to work on the block and me room to work on the block. Both of us finish well around the basket and we’ll complement each other pretty well.”

More than that, though, Dedric Lawson also said he was eager to inherit a bit of a leadership role for the 2018-19 Jayhawks.

Despite the upcoming season being just his first at KU, Dedric Lawson is one of only two players on KU’s current roster to have appeared in more than 50 career games, logging by far the most career minutes (2,166) of any current KU player.

Junior forward Mitch Lightfoot is second in career games (64) and K.J. Lawson is second in career minutes (1,275), the only other current Jayhawk to top 1,000 minutes to date. Lightfoot has logged 633 minutes and Azubuike, who was injured for all but 11 games his freshman season, has played 990 minutes in 47 games.

“I’m looking forward to the role,” said Dedric Lawson of taking the reins as a team leader. “I like it. I like to lead by example. I might not say a lot of things to you, but if I do the right thing, others will follow – be that good role model that guys need as an example. Hopefully, guys will follow that. But if coach needs me to talk more, I will.”

Why would you want Dedric at the three? Just curious.

So that you can get Silvio on the court. That's a lot of power.

this season KU will get back to its roots..front court dominance

I am looking forward to seeing Kansas dominating on the boards and scoring a lot more points in the paint. I've got a feeling that Dedric is going to blow up next season to become Big 12 Player of the Year.

I agree Marius. This is going to be traditional KU basketball this year. I enjoyed the 3 ball seasons, but I feel a lot better going into games where we control the boards.

yep..that 4 guard lineup always put KU at a disadvantage on defense..it felt like they HAD to hit 3's at a high rate in order to win and they were always getting outrebounded

The 4-Guard offense wasn't too bad, evidenced by an elite 8 and final four game and two Big12 titles.

yeah it was fun seeing all those 3's, but as Self has always called it..fools gold..lack of an inside game is what got KU squashed by Oregon..KU has been weak on defense and rebounding hassucked these last few years..yeah they looked great when the 3's dropped..but when the didnt they looked average...give me dominant inside scoring with average outside shooting over average inside with outstanding outside shooting any day

I'm sure Self has learned when to employ the four-guard offense when needed. He isn't going to throw out an offense that lead to an Elite Eight and a Final Four but I'm glad that it is now an option and not because there weren't enough bigs.

I agree..I think Self prefers his traditional 2 bigs but now he knows how to use a 4 guard lineup and he knows it could work if he ever had to use it again

BOY YOU GOT ME EXCITED! Great article Matt.

IF Silvio plays next year I wonder if Self will platoon them as he had in the past. I'm thinking McCormick and Silvio and then Udoka and Dedric. So many opportunities are available to this team for the first time in a few years.

Where we ended up in the NCAA the last two years just shows how good of the coach Self is.

did you list Silvio and McCormack 1st because you think they will start over Azibuike and Lawson? I sure hope not..IF being the key word..if Silvio isnt fully cleared by the NCAA again to play Id rather KU not risk playing him

Or Marcus in the backcourt?

You're really on your game today, Marius. Indeed, there are a lot of intriguing opportunities. One of the best things is that, unless Udoka somehow magically learns to shoot free throws, there will be plenty of substitution possibilities at "crunch time." We likely won't see a game thrown away like the one at OU this past year.

The truth is that, no matter what talent Coach Self has available, he will make it work like he always has done. He is a coaching and development genius.

A full roster of guys that can play, how novel is that going to be? Last season was really rough with an extremely short roster the first half of the season, and still a bit short and inexperienced the second semester. You never want your main guys in foul trouble, and now there are options for just about everyone on the team. I can't wait to see this group of guys playing!