After receiving NBA feedback, Udoka Azubuike aims to get in ‘way better shape’

Udoka Azubuike shouldn’t have to completely reinvent himself during his junior season at the University of Kansas to cement his NBA stock.

In fact, according to the 7-foot center from Nigeria, some teams he spoke with in May while weighing his future said he had a chance to become a late first-round pick this June if he decided to stay in the 2018 draft.

Although no reputable mock drafts even projected Azubuike as a lock for the second round, the big man who ultimately decided to return to Lawrence attested Sunday afternoon that some teams’ representatives told him face to face that they thought he could go in the latter stages of the first round, when contracts come with guaranteed money.

“It was basically just my decision on what to do next,” said Azubuike, who had a stay-or-go option because he tested the waters without hiring an agent, “and making the right choice for me.”

Reaching a resolution proved difficult for the 18-year-old at first, especially while considering the possibility of going in the first round, which wasn't a certainty.

“After speaking to my family and speaking to (KU coach Bill Self), I just thought it was in my best interest to come back for my junior year,” Azubuike said after signing autographs inside Allen Fieldhouse for KU basketball campers.

Attending the league’s draft combine — where he was able to speak with coaches and executives from several franchises — and then traveling out to California for his lone team workout with the Los Angeles Lakers proved valuable for the Kansas big man, who shot 77 percent from the floor as a sophomore and averaged 13.0 points, 7.0 rebounds and 1.7 blocks, helping his team reach the Final Four.

Receiving feedback during interviews with various NBA-level evaluators allowed Azubuike to enter the rest of his off-season with a focused plan of attack. Asked to share some of the areas where he needs to improve, the low-post behemoth replied, “Not a lot,” before providing the details. 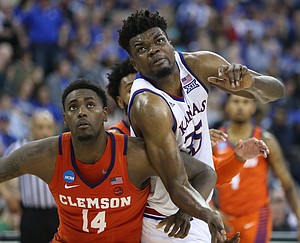 “I just need to get in way better shape,” he elaborated.

With that as his starting point, Azubuike will also look to become a more frequent rebounder and fine-tune his footwork as a screener. He was told he needs to do a better job of not only setting strong screens on the ball, but also getting to the basket quickly off those actions.

“Pretty much it’s all stuff I can capitalize on and really work on,” he said. “Like I’ve been doing. I just need to do it way more.”

At the NBA Draft Combine in May, Azubuike weighed 273.8 pounds, with 7.95 percent body fat. He said he’s around 270 right now and would like to play at about 260 during the season, which begins Nov. 6, against Michigan State, in the Champions Classic.

Although a minor cold kept him from doing all of his typical basketball work this past week, upon returning to campus for the summer, Azubuike anticipates addressing his conditioning throughout the months ahead.

“Pretty much in the off-season, just run as much as I can and get into better shape,” he said of his plans, which obviously also include improving his free-throw stroke (41.3-percent accuracy as a sophomore). “In the NBA, they told me the bigs, they run a lot. Just rim-running — running to the rim, posting up, with my strength and my athletic ability. Just running to the front of the basket is going to help a lot.”

Playing faster for longer stretches will be a must for Azubuike on the defensive end of the floor, too, if he wants to become a more complete prospect.

“They want to see me block shots,” he said of his NBA appraisals. “They know that I can (play) help defense, like I’m really good at it as a big. As big as I am, I can really slide my feet a lot and shuffle my feet on defense, run back and stuff like that.”

At the combine, Azubuike’s standing reach measured at 9 feet, 4.5 inches, to go with his 7-7 wingspan and 31.5-inch maximum vertical leap. The idea now is to make sure his already impressive frame can handle competing intensely for longer durations than he has shown during his two seasons at KU.

If he’s able to pull that off, the big man said the NBA people with whom he spoke said he would have a chance to go much higher in the 2019 draft, perhaps even in the lottery.

“I had to really think about all that stuff,” Azubuike said, “and just kind of sit down and meditate and make my decision.”

So great that these kids can get expert evaluation from the pros. Certainly, it has to be motivational. If it's not, then there is another problem.

If I'm Dok, the day after we win the National Championship next year, I'd call Jeff Whithey and schedule a series of training sessions on shot-blocking. Whithey could probably make a living as a for-hire specialist coach.

Oh, and maybe a little work on that free throw.....

Dok should be calling Withey right now. There is no point in waiting until after next season to start working on shot blocking. He needs to show he can actually do it in games before the draft. Hell, give Embiid a call as well.

Surprisingly, Udoka led the team with 1.7 blocks per game. I feel confident that 1.7 will not lead the team next year.

He needs to work hard on his rebounding as much as anything. The KU staff will work hard to get him to improve.

I find it extremely hard to believe that basketball shoes provide 2 inches of lift. That is about half way to 1970s platform shoe level.

I guess you should look at all of the other results from the combine measurements as well then...and past years. It's not new, nor is it odd. It's pretty typical. Think of how large his shoes are. Do you not think the height of the sole scales proportionally with the other dimensions of the shoe?

They are measured twice, one time with shoes, another time without. You can guess which measurement players and teams choose to use.

Not sure why the sport with the tallest athletes feel the need to stretch the truth.

All these amazing ideas are more evidence that hiring a committee of the LJW discussion board Chicken Littles is the best way to fill the AD position!!

A basketball center working on shot blocking and rebounding!!

This is real breakthrough stuff.

Where else will you find bold and innovative ideas like that? While we're at it, why not hire them to replace Coach Self too? With all that transcendent thinking how could any team ever lose?

Where have you been hiding Jay? Trump rallies?

Were you trying to seem stupid on purpose, or is that just how you are?

It appears to me that Udoka will have competition for playing time. Right now dunking is his best skill. I don't remember him making a shot more than a few feet from the goal. Not to underrate his ability but that won't cut the thread pro wise. Conditioning is highly important.

You think he might not get to play? The NCAA leader in FG% might slide down the Jayhawk depth chart?

The player that sports publications label as THE biggest rankings changer returning to college for the upcoming season "will have competition for playing time"?

I think the only competition for playing time for Dok will be the state of his conditioning, his foul situation, his foul shooting in a close game at the end and injuries.

All things being equal, there is no one currently on the team who has the greater potential for impact on the game than Udoka. Bill now has a bevy of adequate replacements to spell the big guy and allow him to go full bore when he is in the game.

DOK needs to dedicate himself to the weight room also. He will be much more impressive looking like Thomas Robinson. And, it will be much easier for him to win contested rebounds.

Don't sleep on the freshman, McCormick. He and Udoka will likely compete for the low post playing time. Udoka's experience will benefit him in the beginning, but don't be surprised if by the end of the season, they are competing for about the same amount of playing time.

It's a problem that a lot of teams would like to have.

not likely...Azibuke not avoiding silly fouls would be the only reason DM would get any sizable minutes at the 5..David could play beside Azibuike in certain lineups but he isnt about to steal Azibuiki playing time..

I'm a little surprised if all the feedback Dok got was ". . . get in better shape. . ." It seems like stating the obvious, but it seems to me a guy with 7-7 wingspan would have more blocks and more rebounds. Maybe he was just too tired to block or rebound. DeSousa really seems to be a more natural rebounder, if there is such a thing, maybe Dok will catch on. Maybe with some backup, Dok will figure out how to block shots better, as he shouldn't have to worry about fouls as much.

seeing a show DeSousa might not even see the floor this season Azibuike better become a better rebounder..plus Lawson will eat up boards as well..this should be the best rebounding team Self has had in at least 3-4 years

He couldn't risk the fouls created by trying to block shots. He/coach Self will be less concerned about that this year .

PLUS in his Junior season, having just been to NBA workouts, Dok will get the benefit of much different officiating. Look at the difference between Withey fouls from Jr to Sr. That big a difference? Maybe not, but significant.

Hopefully they told him to work on his free throw shooting. Sub 50% is a real liability in any league. Coach Self had to yank him the last 5 minutes of a number of close games last year. This year will be more of the same if he still struggles at the line. At least this year we will have better options in that situation than last year.

I always look forward to basketball season, but this year I wish it were starting this weekend. I am expecting so much from this team. I am also trying to temper my unusually high expectations with the realities of so many new people on the team and the potential of this team.