Notebook: Self considers Azubuike ‘doubtful’ for game at No. 18 Arizona State, but ‘who knows?’

Although Kansas basketball coach Bill Self wouldn’t completely rule out the possibility of center Udoka Azubuike returning to the lineup for Saturday’s game at Arizona State, two days ahead of the Jayhawks’ first true road game Self wasn’t counting on the 7-footer’s presence, either.

“I don’t know,” Self initially said Thursday afternoon, when asked during his weekly press conference whether Azubuike’s right ankle injury had yet recovered enough to allow the junior big man to play against the No. 18 Sun Devils on Saturday.

Just like the rest of his teammates, Azubuike didn’t practice on Wednesday, when the team’s only activities involved reviewing game footage and a holiday shopping outing for Lawrence families in need.

Self, speaking with reporters ahead of Thursday’s practice, expected the center, who injured his ankle on Dec. 4 against Wofford, to “try and do some things” during the session.

“I don’t know if it’ll be unlimited, but I still think he’ll be doubtful for Saturday,” Self added, before turning slightly more optimistic. “But, you know, who knows? We’d like to get him out there if the docs say he’s good to go.”

Azubuike has missed No. 1 KU’s victories over New Mexico State, Villanova and South Dakota since injuring his ankle in the first half against Wofford.

The junior center from Delta, Nigeria, is averaging 12.9 points, 6.1 rebounds and 1.4 blocks, through the first seven games of his junior year.

With the NCAA’s investigation into KU forward Silvio De Sousa’s eligibility ongoing, Self was asked Thursday whether he had any sort of updates on the matter. 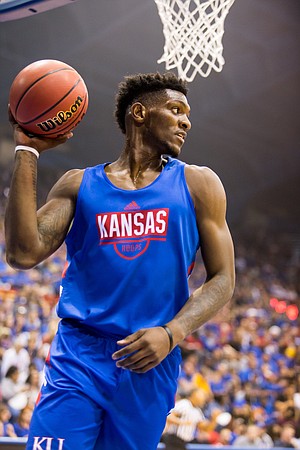 Sophomore forward Silvio De Sousa inbounds the ball at Late Night in the Phog on Friday, Sept. 28, 2018 at Allen Fieldhouse.

“No. No, I don’t have anything,” Self responded. “I have nothing to report. Nothing. So, that’s not what we had hoped. But, certainly, that’s the reality of it.”

KU, of course, has held De Sousa, a 6-9 sophomore post player, out of competition so far this season.

The team is awaiting an NCAA ruling on De Sousa’s eligibility after his guardian, Fenny Falmagne, allegedly received $2,500 for college courses to send the five-star prospect to Kansas, after Falmagne also allegedly got $60,000 from a Maryland booster.

As a freshman who enrolled at KU early, during the middle of the 2017-18 season, De Sousa averaged 4.0 points and 3.7 rebounds while playing in 20 games for the Jayhawks, who reached the Final Four.

The hysteria surrounding the Kansas City Chiefs (11-3) and the team’s star quarterback, Patrick Mahomes, trickled over into Self’s press conference Thursday when the KU basketball coach was asked whether he thought Mahomes should be the NFL’s MVP this season.

“As a fan and a homer, I would say, yeah, positively,” Self said regarding the Chiefs’ second-year QB, who recently sat courtside in Allen Fieldhouse to watch the Jayhawks’ home victory over Villanova. 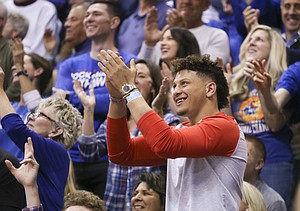 Kansas City Chiefs quarterback Patrick Mahomes stands up to applaud during the second half, Saturday, Dec. 15, 2018 at Allen Fieldhouse.

Mahomes leads the NFL in passing yards (4,543 yards) and touchdown passes (45) with two games left in the regular season.

“I haven’t studied it, but numbers wise, heck yes, all those things,” Self added of the marquee Chief’s MVP case. “But I also think going 2-0 the last two games would solidify it. Because I do believe that he’s incredible.”

“Certainly, there’s a couple other guys out there, and if they finish strong and we don’t, then maybe people will look at it differently,” Self said. “But I can’t imagine Brees or anybody beating him out.”

This Silvio thing is really getting annoying. The kid received a $2,500 unauthorized benefit. That’s $250 a game, twice the historical penalty rate. The MD $60k deal should not involve Silvio at all.

Once again the NCAA shows the only thing they do really well is ... mess over the student athlete. What do they want? Another mass @freetheathlete campaign? In the almost 250 year history of our republic, I can’t think of any organization more loathed by the general public.

Oh, I dunno... I think Congress and the IRS pretty much take #1 and #2 spots. NCAA definitely makes the Top 5 List though... lol

I heard the rumor was, he would move on if not cleared soon. However, given the way things worked out for Billy Preston, I'm not sure he's not better off waiting for a NCAA decision and getting a full season with KU if he regains eligibility. Obviously if they rule he's ineligible then his path is clear.

Wonder if Azubuike is practicing his free throws with all the down time. The basket is your friend, become one with the basket.

Benton, what kind of slant are you trying to put on this? You know that the $2,500 was for classes. Why didn't you say this? It sounds like that doesn't fit the picture you are trying to paint.

First of all there is NO EVIDENCE his guardian received $60K. All you have is hearsay. The testimony was that Adidas heard that Silvio's guardian received $60K. It was introduced solely to explain why Adidas acted, not to establish the truth of the statement. If the FBI had evidence that $60K was actually received, then they would have to have turned it over to the Defendants and the Defendants would definitely have used it. This is epitome of hearsay. There is 0 support for the statement.

The thing I dont understand about the Silvio situation is how this guardian isnt being charged criminally but the shoe company is. It seems to me she defrauded both the university, by intentionally misrepresenting Silvio's status, as well as Silvio himself. Its outrageous that Silvio is paying for her crimes and she isnt even in danger of the slightest bit of punishment. This kid comes over to the states looking for an opportunity and trusts the people offering to take care of him and from the looks of it, she was a con artist. Its incredibly sad and frustrating

The FBI could have charged a lot of different more appropriate people for this yet another made up crime. Falmagne, Silvio's 'guardian/agent/broker' sounds like your basic shake down artist.

I wish the Nike cases would get going so some other programs get drug through the mud like we were.

Those cases may not go anywhere...seems defendants are now seeking plea agreements...so this dirty laundry may stay hidden. :(

Back to Arizona State, feed the ball to McCormick down low and let him use his superior footwork under the basket and get more game time experience. If we are to win it all this season, we will need all our eligible bigs to be able to play multiple minutes. Beating a highly ranked team at this time in the season is less important than Dok's ankle.

So much the better if we get Silvio back.

Pretty sure that this won't be won't be a popular decision in the Lawrence area but I still have Drew Brees as the season MVP.

He's the sentimental favorite, but he's been outplayed by Mahomes and it's not that close. The Chiefs would be 6-10 at best w/o Mahomes. The Saints would still be above .500 w/o Brees.

Organizations loathed more than the NCAA;:

Not necessarily in that order!!

The NCAA still has a chance to crack your Top 5!

Why isn't the NCAA or someone looking into the Duke recruiting. Williamson was wanting alot to come to Kansas and other schools. Went to Duke and no bodys checking!

You need to know who that 'somebody' is. The FBI, the NCAA, and the individual universities should be enough.

Would you want to see the Justice Department get involved?