Lindsey’s deal is worth $2.65 million dollars over the course of four years, with KU having an option it must exercise in order for the final year of the deal to kick in.

Lindsey will coach at KU through the 2022 season if the athletic department exercises the option — terms state that decision must come “on or before” Dec. 15, 2020, which would be after the conclusion of the regular season in the second year of the deal. If it’s not exercised, Lindsey will only be owed compensation for the third year of the deal, but not the fourth.

The three-year terms without the fourth would pay Lindsey $1.85 million.

A USA Today list of FBS assistant salaries for 2018 published this week showed Lindsey made $1.1 million as Auburn’s offensive coordinator and quarterbacks coach this year. 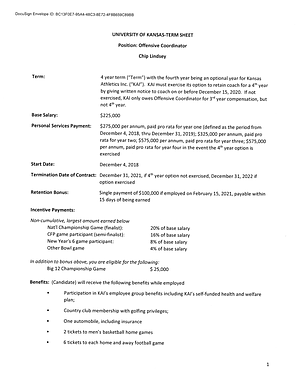 Incentives of the deal include:

Those incentives are non-cumulative, so he would receive payment of just one bonus if multiple incentives were achieved in the same season.

Additionally, Lindsey would receive $25,000 for KU playing in the Big 12 championship game.

The terms also state how any possible termination of the deal would play out.

If Lindsey leaves KU to become an FBS head coach, KU would be owed nothing.

If Lindsey left to work for another program in “any role other than as a head coach” before Dec. 15, 2019, KU would be owed 60 percent of the current year’s salary and personal services payments. Those percentages decrease to 50 percent in 2020 and 20 percent in 2021, with Dec. 15 being the cutoff date in each year.

If KU terminates the deal without just cause, Kansas Athletics will pay Lindsey an amount of release payments “equal to the sum of his remaining base salary and personal services payments” over the course of two years from termination “or the otherwise unexpired term of the contract, whichever is longer.”

By signing on, Lindsey agreed that if employment was terminated before the fourth year being exercised, Kansas Athletics owes him $800,000 for Year 3, but nothing for Year 4. 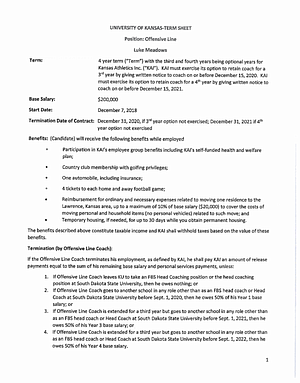 Meadows, who coached the offensive linemen at Eastern Michigan the past two seasons, signed on for a $200,000 annual base salary at KU, with the third and fourth years being optional years for KU.

Terms of Meadows’ deal with KU state he would owe his current employer nothing if he left to take an FBS head coaching job or to become the head coach at South Dakota State, where Meadows went to school and would later become an assistant for 10 seasons.

If Meadows were to leave KU for any other coaching position before Sept. 1, 2020, Kansas Athletics would be owed 50 percent of Meadows’ Year 1 salary.

Should his KU deal be exercised for a third year but he left for a coaching job that wasn’t head coach at an FBS program or South Dakota State before Sept. 1, 2021, Kansas Athletics would be owed 50 percent of his Year 3 salary. The same amount would be owed if Meadows were retained by KU for a fourth year and then he left before Sept. 1, 2022 for any reason other than to become an FBS head coach or head coach at SDSU.

If KU were to terminate the deal without “just cause,” Meadows would receive release payments equal to the sum of his remaining salary over the course of 12 months.

You posted earlier that you would bet money on Leavitt being the next coach at K-State if the bet was Leavitt or the field. I agreed it would likely be Leavitt but I’d like to hedge my bet and vote on the field.

...you knew I'd be checking out the football articles, huh? LOL.

Yeah. I could be wrong. I suppose if all the answers were known, we wouldn't call them predictions. Truth is, I am less solid on Leavitt today than I was when I made the comment. I still think he'd be the best for their program. But no matter who they bring in, I'm happier with our coach than any I've seen speculation about for KSU. That aside, I just want to see us competitive with them again.

In fact, Miles probably only needs to do 3 things for season 1 to be considered a success from a fan's perspective.

Agree. I think they are making a mistake if they pass on Leavitt, I would have been happy to see him at KU but given his Missouri ties, that scenario just doesn't seem kosher.

My hope is KU gets better and K-State gets worse. Then we might have an actual rivalry. For the last three decades they have owned us in football and we have owned them in basketball. That's not a rivalry, at least not a good one.