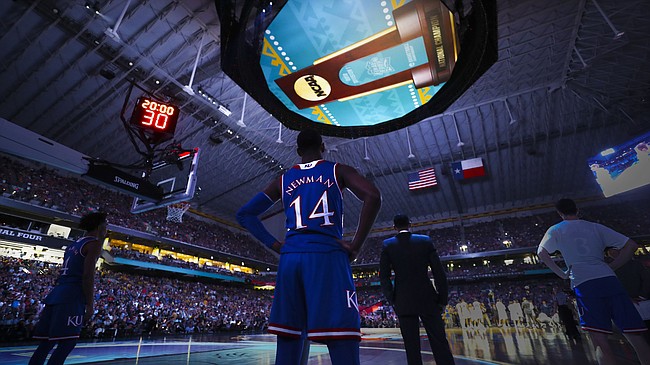 College basketball is changing the system it uses to evaluate the strength of its teams for inclusion and seeding in the NCAA Tournament.

But, according to KU administrator Larry Keating, who, for years, has been heavily involved in making the schedule for the KU men’s basketball program, the new system does not figure to have much of an impact on KU.

“Overall, I think the whole concept of this new system is a good idea,” Keating told the Journal-World on Wednesday, a few hours after the NCAA announced the new NCAA Tournament Evaluation Tool (NET) that will replace the RPI. “But I don’t think it’s going to affect us at all. … All they’ve done is take the RPI system, jazz it up with a couple of things and call it the NET.”

According to an NCAA news release announcing the NET as the new it formula in college basketball, the new system will rely on “game results, strength of schedule, game location, scoring margin, net offensive and defensive efficiency and the quality of wins and losses.”

In short, it will factor in everything that fans have debated for years, while incorporating a little of the modern-era analytics that have become a mainstream evaluation tool across all sports.

Despite the changes, Keating said he saw no need for KU to re-evaluate its scheduling practices now or in the future.

“It all produces the same thing,” Keating said.

According to Keating, who is well-versed in all things RPI — the KU administrator cobbled together his first college basketball schedule in 1969 — the only elements of the NET that were not used by the RPI are scoring margin and offensive and defensive efficiency ratings.

Keating said scoring margin had been used in the RPI system but was eliminated because of its inability to accurately reflect the outcome of every game. And, although he himself utilizes analytics made popular by guys like Ken Pomeroy of KenPom.com, and other similar sites, Keating said he was unclear on how the efficiency numbers would factor into the NET rankings or how much weight they would carry.

“How do you compare the offensive and defensive efficiency of a team playing in the America East Conference to that of West Virginia playing in the Big 12?” he said.

The creation of the NET rankings marks the second year in a row that the NCAA has tweaked its college basketball rankings system.

Last year, a new quadrant system that put greater emphasis on success in road games became a much-talked-about tool for predicting which teams would get into the NCAA Tournament and determining which teams belonged.

According to the release, the move to the NET system was approved in late July after months of consultation with the Division I Men’s Basketball Committee, the National Association of Basketball Coaches, top basketball analytics experts and Google Cloud Professional Services.

Part of the process to develop NET included taking real data from recent games — including NCAA Tournament games — and analyzing that data from all angles, with the goal being to create a formula that is as accurate as possible and fair in its judgement of team performance.

“What has been developed is a contemporary method of looking at teams analytically, using results-based and predictive metrics that will assist the Men’s Basketball Committee as it reviews games throughout the season,” said Dan Gavitt, senior vice president of basketball for the NCAA. “While no perfect rankings exist, using the results of past tournaments will help ensure that the rankings are built on an objective source of truth.”

While objectivity is the goal of these rankings and others like them, subjectivity will remain an important part of the NCAA Tournament selection process.

Keating said as much on Wednesday and Gavitt referenced it in the NCAA release.

“As has always been the case, the committee won’t solely focus on metrics to select at-large teams and seed the field,” Gavitt said. “There will always be a subjective element to the tournament selection process, too.”

Added Keating, underscoring the difficulty of searching for the perfect system to build the 68-team bracket each March: “There will always be a 69th team and a 70th team that will say, ‘Well, we should be in.’ But I think this is a good move, because it should help them get rid of all of this complaining about, ‘Well, the RPI’s unfair.’”

“There will always be a 69th team and a 70th team that will say, ‘Well, we should be in.’ But I think this is a good move, because it should help them get rid of all of this complaining about, ‘Well, the RPI’s unfair.’”

He's absolutely right. Now people will complain about the NET being unfair ...

Receivers complain that running backs play by different rules when they ground does cause a fumble.