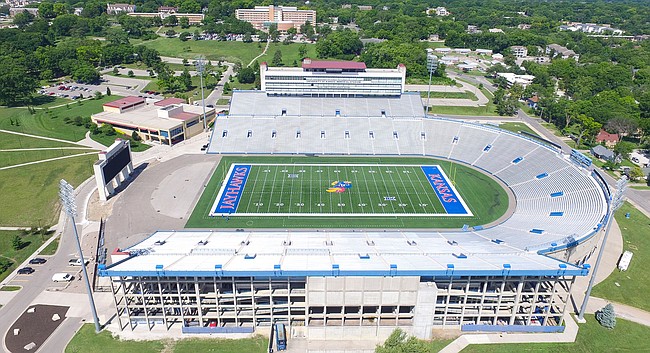 According to KU Athletics officials, Memorial Stadium is set to undergo a $300 million renovation. Currently, architects are completing renderings of the renovation plans.

The University of Kansas is counting on a significant amount of donations to enable a planned $300 million renovation to Memorial Stadium.

KU athletic director Sheahon Zenger told a crowd at a football meet-and-greet Wednesday evening in Kansas City, Mo., that the project — which will include an indoor practice facility — was on the horizon.

But Zenger didn’t say much more, other than that detailed plans would be shared publicly in September.

Jim Marchiony, associate athletics director for public affairs, said Thursday that donations would be key to paying for the project. He didn't say how much money has been raised so far.

“We’ll use multiple sources of funding; chief among them will be fundraising,” Marchiony said, in an email response to the Journal-World. “We’ll have more to say about that, and a construction timeline, when we release more details in September.”

Marchiony also declined to elaborate on features of the planned project.

Memorial Stadium has been on KU’s list of capital improvements projects for the past couple years — but toward the end of the list, as a future project.

The Kansas Board of Regents annually considers and approves the list, although actually completing projects is subject to securing funding, whether that be state dollars, private donations or other sources. The newest list, approved by the Regents this spring, features projects that would begin in fiscal years 2018 through 2023.

Renovations to Memorial Stadium were on the last year of that list, scheduled to begin in 2023.