Topeka — The University of Kansas plans to rename its football stadium in honor of David Booth, the KU alumnus who has pledged $50 million over five years toward the stadium’s upcoming renovation, Chancellor Douglas Girod announced Wednesday.

Girod announced that plan to the Kansas Board of Regents, which voted unanimously to authorize the name change to the David Booth Kansas Memorial Stadium. 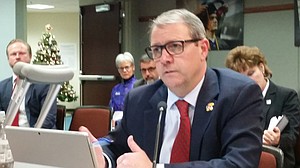 University of Kansas Chancellor Doug Girod tells the Kansas Board of Regents that the university wants to rename its football stadium as the David Booth Kansas Memorial Stadium, honoring the KU alumnus who has pledged $50 million toward its renovation. The board voted unanimously to approve the name change.

Currently known as Memorial Stadium, the facility was dedicated in 1922 in honor of the 129 KU students and alumni who were killed in World War I. It is currently one of the oldest stadiums still in use in college sports.

But there is little signage or other information at the facility explaining what the stadium is a memorial to, and Girod said there are probably very few students on campus who are aware of it.

But he said renaming the stadium will give KU an opportunity to rededicate the memorial aspect of it in order to make that story more well known.

“I think it does create an opportunity for us to elevate that back up to the fore,” he said.

Kansas Athletics has announced plans for a major renovation of the stadium and has set a goal of raising $350 million over five years for sports facilities. Most of that would be earmarked for the football stadium, but some would also go toward baseball and volleyball facilities. 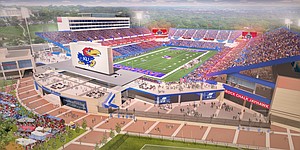 Girod said as of last month, the university had raised about $70 million toward that goal, including the $50 million pledge from Booth, the largest gift ever made to KU’s athletic department.

“Of course that’s not all David has done. He’s been a tremendous supporter for decades,” Girod told the board. “As you will recall, he purchased the original rules of basketball written in 1891 by James Naismith and presented that to the university, which is now displayed in the DeBruce Center. He also has supported the Booth Family Hall of Athletics at KU and has supported many other programs as well.”

The Booth Family Hall of Athletics, located adjacent to the east side of Allen Fieldhouse, is named in honor of David Booth’s parents, Betty and Gilbert Booth, both longtime Jayhawk fans and Lawrence residents.

David Booth graduated from Lawrence High School and went to KU, where he earned a bachelor’s degree in economics in 1968 and a master’s degree in business in 1969. He then went on to earn an MBA at the University of Chicago, where he met his future business partner, Rex Sinquefield, who is now a Missouri political activist. Together they founded Dimensional Fund Advisors, a mutual fund company that operates throughout the United States and several foreign countries.

Booth has also been a major donor to the University of Chicago, whose business school is now known as the Booth School of Business.

Girod said after the meeting that he doesn’t yet know when the official name change will take place.

Fire the lot of them!

Clarification: Mr. Booth is a Hall of Fame Jayhawk and his dedication to KU is unsurpassed so the following suggestions are a reflection of the current administration incompetence and meant as absolutely no negative toward this great Kansan.

2] Kansas Lipstick On A Pig Stadium.

3] Build It But They Still Won't Come Stadium.

5] If this renovation actually upgrades the football program, I suggest we rename the main campus drag, JayBooth Boulevard!!

So we've raised $70 million and are on track to have a football season next year where we'll be lucky to win 3 games and more than likely will win 1 or 2 and possibly 0. How in the hell are we gonna make up the difference of several hundred million dollars when the fan base is going to be so despondent with the team next year that we'll likely break attendance records for lowest attendance in some time coupled with the fact that Beaty is loading up on JuCos w/ mostly 2 years of playing time which is just going to draw out the futility on the field for many more years to come?

Girod can't even get the Volleyball court built and it was fully funded. Do we want Girod picking our next AD?

A fact and a question. Fact: All of the World War 1 Memorial Stadiums are still in use (Nebraska, the Ohio State, Texas, Illinois), with the exception of the University of Minnesota. Question: Wasn't the consensus that the track was to blame for poor football performances? What is the record since the track was removed?

I think Memorial Stadium is a fine name honoring our vets who maybe many of you didn't know or have forgotten.

Congrats to David Booth whose generosity and contributions to KU are monumental. How incredibly cool is it to have a Lawrence, KS kid born and raised on Naismith Ave grow up to attend KU to be memorialized in this manner. The way Booth stepped up to buy The Original Rules makes him an authentic hero to all KU stakeholders.

How about extending the memorial aspect to include ALL KU vets in all wars (but with special mention of the WWI vets)?

It will always be Memorial Stadium to me.

I hope Mr. Booth enjoys his stadium. Maybe we can put a bronze statue of him out front like 'Ol Balls up at K-State. Regardless, he'll be doing it without me.

I'm sure people like Booth think they're doing a great service to school's like KU. In fact, it couldn't be more the opposite. It's these grotesque amounts of money donated that keep driving AD, coaches, and assistant coaches salaries well beyond their worth. Having seen a coach make 10 times the salary of some of the top professor's have a 3-33 record, and the most dismal recruiting classes ever at KU, I've decided it's time to call it quits.

While my athletic donations are an insignificant fraction of what Mr. Booth donates, my long standing financial commitment to academics at KU will be missed. Girod, in my opinion, is clueless. If we can raise this kind of money for the worst football program in the country to build fluff and nonsense, there's no reason for me to continue contributing to academics. Let Mr. Booth carry that load as well.

If the Booth Family have given the funds to make Old Memorial an up to date Stadium, I have no problem with including the name Booth along with Memorial. If the plans that the University has put out, come to be, we need to give the Donor some of his due. Universities need up to date facilities and a handsome Stadium to win at Fball these days. What I saw in the projections are just that.