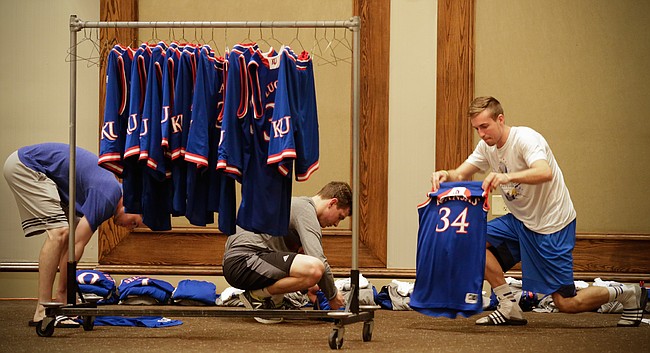 KNOXVILLE, TENN. — Kansas and Michigan State are participating in the Final Four after all, albeit on a much smaller scale than expected.

While the Jayhawks and Spartans didn't make it to Houston after getting eliminated from the NCAA Tournament, student managers of those programs will be there playing in their own tournament along with Iowa State and Tennessee.

"We were hoping we'd be with the main team for the main event," Iowa State student manager Tyler Schaul said, "but it will certainly be a cool kind of consolation prize."

The student managers' version of the Final Four may be the biggest March Madness Cinderella story of them all.

For several years, student managers took a break from their grueling schedules to stage pickup games against one another. For instance, if Tennessee and Vanderbilt were scheduled to play on a Saturday afternoon, student managers for the schools would play each other the night beforehand, either in the main arena or at a practice facility.

This year, the games got a bit more serious.

The teams had their own power rankings, with celebrity followers, supporters and fundraisers — thanks in large part to the efforts of Michigan State assistant athletic director Kevin Pauga.

Pauga started using a mathematical formula — the KPI — which he created in 2003 to rank NCAA men's basketball teams during his years as a student manager at Michigan State, to rate the managers' teams for each program. He put his rankings up on a Web site (www.KPISports.net).

"We kind of wanted to add some fun to it," Pauga said.

Word spread about Pauga's system. Pauga said more than 130 schools from 25 conferences played a total of 275 games this season, trying to move up his rankings.

"We'd thought it was a joke, that no one really did that, no one sat down and took the time," Tennessee senior Parker Ratcliff said. "But we checked it and it was legit. Then we just decided to try to keep going up from where we started" in the rankings.

The next step was to have the managers' own version of a postseason tournament. Pauga set up a bracket with help from Michigan State trainers Andrew Novak and Ian May.

Logistical restraints prevented most schools from actually playing their assigned games in the tournament the vast majority of the time. When a game couldn't be played, a team's ranking in Pauga's system and a fan vote would determine who advanced.

Pauga said more than 150,000 votes were cast over the course of the tournament.

The voting got particularly hectic when Tennessee met Georgia in a semifinal.

And in the biggest celebrity coup of all, Kevin Durant also sent out a tweet in support of Tennessee. Durant played for Tennessee coach Rick Barnes' staff at Texas and was informed of the contest by Volunteers assistant Chris Ogden. That Tennessee-Georgia matchup received 23,393 votes.

Kansas manager Tim Skoch believes he knows why these games have started to catch on with the general public.

"Everyone loves an underdog story — and the managers are just the people who do the laundry," Skoch said. "People like to rally around things, good causes. ... It's cool to see the managers have an opportunity to play."

None by Collin Cook

The semifinals and championship game will take place Friday at the George R. Brown Convention Center in Houston, where the NCAA Fan Fest is taking place. Pauga has set up a GoFundMe page that has raised over $1,800 for travel costs.

As for the quality of the basketball, well, it's probably best described as running the gamut from so-so to pretty good.

Most of the managers at the Final Four at least played in high school, but Tennessee's team might be an indicator of the talent. The Vols squad includes 5-foot-6 I.J. Poole as well as Drazen Zlovaric, a 6-9 graduate manager who played collegiately at Georgia and Chattanooga and had a three-year professional career overseas.

But they all figured their playing days were behind them after becoming managers and performing such grunt work as monitoring video and setting up practice drills.

Now they're stepping out of the shadows of laundry rooms at college basketball's biggest event.

Said Poole, "I would have never thought I'd be going to the Final Four to play."