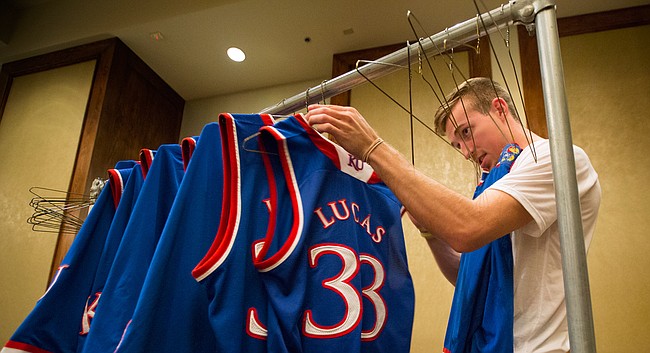 Kansas University men's basketball student managers, Chip Kueffer, Baldwin City, works behind a rack of uniforms as he works to fold and bundle jerseys, shorts and other articles of clothing for the Jayhawks prior to a team meeting on Tuesday, Nov. 24, 2015 at the Westin Maui in Lahaina, Hawaii. The managers abide by a strict procedure for organizing and laundering all of the gear that accompanies the Jayhawks during their travels but often have to improvise on the road when faced with a quick turnaround between games.

LAHAINA, Hawaii — If you ask one of the student managers for the Kansas men’s basketball team, they might tell you the hustle element doesn’t just exist between the whistles. In fact, they’d probably tell you it is required in every nook and cranny of the program, and this includes the laundry room.

During tournaments such as the 2015 Maui Invitational, where the Jayhawks play three games in as many days, it’s the managers' job to make sure the laundry gets collected, sorted, washed, dried, hung or folded and then returned in time for the next game or practice. Often, the team hotels will offer the use of their industrial washers and dryers to handle such loads. Other times, they are unable to accommodate the team, such as during the Jayhawks’ last trip to Maui. Imagine, if you will, the jerseys of Thomas Robinson, Tyshawn Taylor, Jeff Withey and the rest of the team spin cycling in a coin-op laundromat with the locals, which was the case in 2011.

On Monday around 6:30 p.m. Hawaii time, while the players and coaches are heading to dinner following the Jayhawks’ 123-72 win over Chaminade, managers Chip Kueffer, Tim Skoch, Emily Tyler and Jay Turnipseed are going room to room picking up piles of the players’, well, dirty laundry at the Westin Maui in Lahaina. Tyler holds a clipboard, checking off each item received to make sure nothing is lost or unaccounted for. A few stragglers remain, and Kueffer heads down the hall to knock on forward Jamari Traylor’s door. Tyler admits Traylor is habitually the last to turn in his laundry. 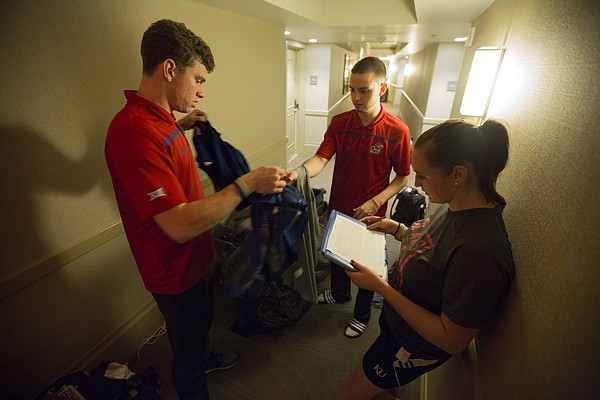 Kansas basketball student managers Tim Skoch, left, Jay Turnipseed and Emily Tyler take inventory of all the uniforms and gear they have picked up to be laundered, Monday night at the Westin Maui in Lahaina, Hawaii following the Jayhawks' 123-72 win over Chaminade. by Nick Krug 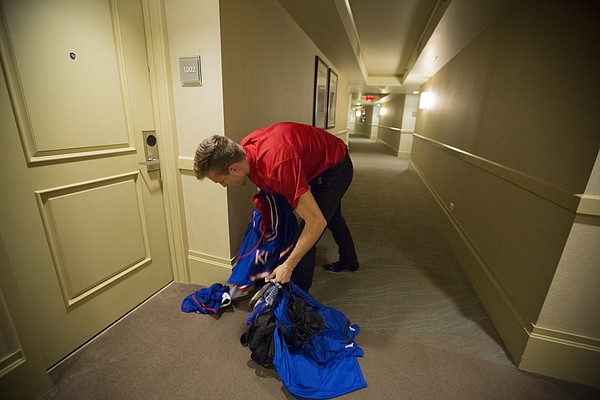 Manager Chip Kueffer retrieves a pile of uniforms left outside a player's room for pickup following the Jayhawks' 123-72 win, Monday, Nov. 23, 2015 at the Westin Maui in Lahaina, Hawaii. by Nick Krug 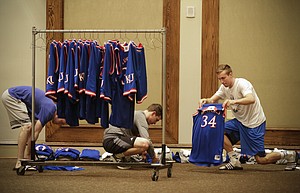 View a photo gallery of the student managers for the Kansas University men's basketball program, who often have to hustle to turn around the laundry during tournaments on the road.

Around 11:30 the next day, Kueffer and the staff are laying out clothes on the floor of an events room shortly before a team meeting, where the players will gather their uniforms for Tuesday night’s game against UCLA. The process of gathering, loading, unloading and folding is a seemingly endless task.

“We constantly have something washing,” said Kueffer, of Baldwin City, who is in his third season as a manager with the team.

“We have laundry going during the game,” said Skoch, a senior from Hastings, Neb., who is also in his third year. “They’ll go out and warm up in their (pregame) stuff. A manager will have that started and washing while the first half is going.”

“(At the Fieldhouse) we are so fortunate to have our own laundry room,” Kueffer said. “We’ve got two big washers, two big dryers. I doubt that many programs are as blessed as we are as far as it comes with our facilities.”

Washing and keeping track of team gear and uniforms are not their only responsibilities. The managers work the summer basketball camps, and it has been known that occasionally Kansas head basketball coach Bill Self will throw them into drills to assist during practices. 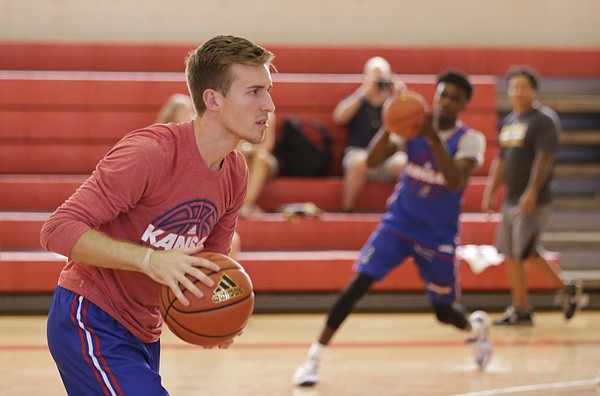 Student manager Chip Kueffer throws passes to the Jayhawks during their practice, at Lahainaluna High School on Saturday, Nov. 21, 2015 in Lahaina, Maui. by Nick Krug

Sounds glamorous, right? Flash back to the 2014 season. It’s after 4 a.m. March 2, and the Jayhawks’ team bus is rolling back to the Fieldhouse following a 72-65 loss at Oklahoma State the night before. Skoch is there to greet the team and start the laundry.

“I just remember sitting on the ledge (outside the Fieldhouse) waiting for the team to get back,” said Skoch. “It was 4:30 a.m., and I had class at 8. You’ve gotta get the laundry started because that stuff can get pretty nasty.”

Although the managers have been able to get the job done stateside, no handwritten instructions from Mom could prepare them for what Kueffer and Skoch experienced while traveling with the team in South Korea.

Quite possibly the biggest feat pulled off by the student managers came this summer, when the Jayhawks represented the United States in the 2015 World University Games in Gwangju. The team arrived on June 30 and defeated Germany on July 13, going 8-0 to win the gold medal. That’s eight games and several practices in two weeks’ time in a country where most laundromats or even local households don’t have dryers.

“This is the panel of the laundry machine that we used,” says Skoch with a smile, as he produces his cellphone with an image of the front of a washer displaying the cycle options written solely in Korean text.

To compensate for the lack of dryers, Kueffer and Skoch made a trip to a hardware store and purchased some rope. According to the two managers, they strung several lines around the room and swung open the sliding-glass door to their balcony, transforming their room into an open-air drying operation.

“I’m telling you, man, our room in Korea, seventh floor, it looked like an obstacle course with all the ropes,” Kueffer said. “It looked like 'Mission: Impossible.'”

“We had like six fans blowing on (all the clothes),” Skoch added. 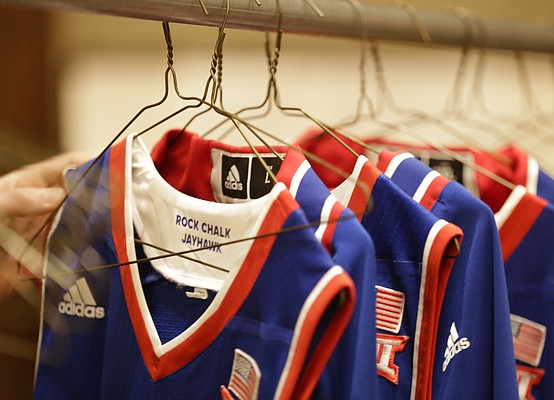 Managers pull jerseys from a rack after a night of air drying as they are organized into bundles for the players, Tuesday, Nov. 24, 2015 at the Westin Maui in Lahaina, Hawaii. by Nick Krug

Their efforts did not go unnoticed by anyone on the trip, including those at the highest levels of Kansas basketball. Following the Jayhawks’ 84-77 win over Germany in the gold-medal game, Kueffer and Skoch described being in the locker room for the team’s celebration when Self announced the two would also be receiving medals.

At the Westin Maui, Self talked about his appreciation for Kueffer and Skoch.

“There really wasn’t much of a decision to be made. There were 13 players that got medals, and they gave us 15,” said Self, who elected not to keep a medal for himself. “Tim and Chip, they worked harder than anybody else over there. It takes a lot more work than what people think to move a party of 24 around in a foreign country like that. They earned it, and they deserved it.”

“I didn’t see it coming,” Kueffer said. “It was just instinctual to just run up and give him a big bear hug.”

Their efforts did not go unnoticed by the players either.

“The guys went kinda crazy,” Skoch said. “I remember getting put in a headlock. (They were) noogying us.”

— “Look” is a monthly feature by Journal-World photographer Nick Krug that looks in depth at topics of interest — particularly visual interest — in our community. Email him at nkrug@ljworld.com.

Thanks for the story. Lucky them. I wish I was offered that kind of job when I was a student there. Can you imagine having access to players' autographs, used shirts, socks, shoes..?

The grunts and NCO's get it done. How nice is this for an "I am thankful for" story? Great job team managers, thank you!!

RC....As usual, you feel the need to throw an anchor around anything not up to your "perceived", high standards, like the team and the program. Not interested, clam up for a change, let these kids have their 15 minutes.

Rob try not to fall off your high horse.

You are defending a story about laundry for petes sake.

Do we really need to see pictures of dirty laundry being picked up? Come back to reality buddy.

Nice recognition for those guys but seriously, during the season I would hope we could hear more about the team practices, who we play next, how diallos prep has changed. Maybe a deep dive into a specific stat.

Hearing about a string being strung up to dry uniforms seems like a slow day. Come on.

Rod provides important context and contrast that allows us to appreciate mature, rational and intelligent contributors.

Great story. Really fun to hear about behind the scenes. Once again, a small thing, but really telling, for Coach to give up his medal for one of these guys. "Slow day" you say...no, not really. Yesterday at Memorial Stadium was a slow day. These kids doing the type of work most of us would not enjoy will have stories and memories for a lifetime. Congratulations to the 4 of you. And thanks for the story, Nick.

Hearing about creative laundry is a slow day.

If you have no interest in the story, why offer up suggestion as how to improve it? This isn't an article about the managers themselves, rather a glimpse into how they manage to get done, a very taxing job.
I found this to be a very interesting read, because I myself have often wondered about all the clothes that the players accumulate during the season, and who is in charge of it. It's also a glimpse behind the scenes of our beloved bball program. Had they taken your suggestion and written about the managers personal lives, most would have found that uninteresting, I assume. So don't quit your day job to become an editor anytime soon. Stick to being an arrogant pessimist, you're very good at that.

Its weakly written, gives little insight, and offers a narrow view of information.

Glimpse? What glimpse? How to use a string to dry laundry? How some of the gear is nasty? Seriously your upset about a riveting story on laundry?

I say Slow Day and some of you take issue to that. Give me a break. You know the overly protective political correct team can take a day off now and then. We will all be ok. Most of us are grownups on here...I have to remind myself of that over and over.

Sorry if asking for a better article with more information is an affront to you and your feelings. But I will stick to voicing my opinion on here. Like I said to Rob, if you want to skip over my posts, feel free to. It will be a struggle, but I will somehow find the strength to go on even if I know you will never comment on my posts again. Oh the sorrow...
​

It's good to have those like Rod that provide the necessary contrast to thoughtful and intelligent contributors.

Talk about KU's love of basketball and indifference towards football. A story about laundry gets more comments than most football stories.