The Kansas Jayhawks, coaches and staff position themselves around the field and in the end zone for stretches during practice on Friday, Aug. 19, 2016 at Memorial Stadium.

The first time Brandon Stewart heard the faint buzzing emanating from the airspace above the Kansas football practice field, he assumed the worst.

A senior cornerback, Stewart knew the team had expanded its video equipment to include a drone. It just took a few preseason practices for the Jayhawks to get used to the newest addition to the program.

“Yeah, you think it’s a swarm of bees when it’s behind you,” Stewart said. “You always want to watch out when it’s like 20 feet above you.”

Such fleeting concerns never would go through a KU player’s mind had head coach David Beaty not hired Jeff Love as director of football technology this summer. When Love, a former KU video coordinator from 2008-10, was offered a job to bring him back to Lawrence, his new boss asked if he had anything “new and cool” to implement. Love asked Beaty whether the team flew any drones, and the coach told him no.

The Jayhawks’ very own drone pilot, Love left his former video position at Kansas after Turner Gill’s first season in order to coach defensive backs at Occidental College in Los Angeles. He soon moved on to Houston Baptist to join forces with former Kansas defensive coordinator Vic Shealy, who started the program from scratch in 2012.

At HBU, Love coached quarterbacks and receivers, and spent plenty of time visiting high school practices in the football-crazed Lone Star State, in search of players to bring to the developing FCS program. At the conclusion of the spring recruiting period in 2015, Shealy’s staff congregated for a brainstorming session and drones came up because some prep football programs in Texas were using them to record practices. The HBU coaches agreed to do the same. When Love saw the footage he became a believer.

“The view you get,” he said, “it’s such a valuable teaching tool.” 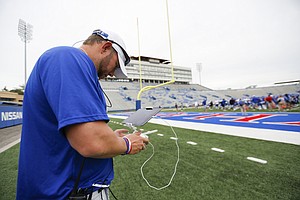 Now every time Kansas practices a drone hovers in the sky to record special teams, seven-on-seven, offense versus defense and other portions of practice, with Love at the controls on the sidelines. The remote for each of KU’s four sleek, white DJI Phantom 4s connects to his iPad, allowing him a live look through a drone’s powerful lens. Appropriately the airborne gadgets are named Todd, Kerry, Darrell and Chris for four of the top Jayhawks from Love’s first stop at Kansas — Reesing, Meier, Stuckey and Harris.

Shortly after each practice ends, the in-flight perspective is available to Beaty and his assistants. Prior to this August, KU’s coaches could only review video captured by the traditional stationary cameras, which offered views from the sideline and end zone. Now the coaches can check out the old-school vantage points or the images from above the field, and flip between them painlessly. Some of KU’s coaches have told Love they watch drone video more than other angles, because it allows the teaching process to become more precise.

“There’s no real angle in football where you’re right on top of them,” Love explained. “So as a receivers coach I can see, ‘Where does the DB’s leverage start. Do I stem him correctly? Am I leaning in or out of the route on time?’ With the high sideline camera, you really can’t see, ‘Is he sticking his foot at the right spot? Has he attacked the angle with leverage yet?’ This gives them the ability to now see that, where the kid might not even know he’s doing it, ’cause you never have that angle.”

Defensive coordinator Clint Bowen said players benefit from the drone footage because it duplicates what they see play out in front of them on the field more realistically than the other vantage points. If anything, Bowen wishes KU could use the drones more on defense, with Love floating one above the heads of the linebackers and safeties. But that only happens in some run-only practice situations. 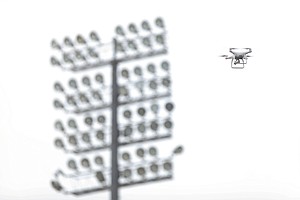 KU director of football technology Jeff Love's drone records practice to give coaches a bird's eye view of their formations.

“Any time the ball’s in the air,” Bowen said of the possibility of a pass, “obviously the drone’s on the offensive side. We can’t be taking shots at it.”

On those rare occasions when the drone can hang out in the secondary, running backs coach Tony Hull likes to examine the video and let his players know what they could be doing better.

“You can see running backs’ eyes, what they’re looking at when they’re making a cut,” Hull said. “(Coaches can) make sure they have proper eye discipline and proper ball placement for ball security. It’s helped us out tremendously.”

Every day, KU’s quarterbacks watch the bird’s eye view of the offense, which resembles the point of view offered by Madden on your video game platform of choice (Love said he positions a drone about 20 yards behind the offense, 20 to 25 feet off the ground). According to red-shirt junior Montell Cozart, the drone replays help each player who studies them.

“I feel like it’s been great for us. In the meeting room we have that view of being able to see everything from the top,” Cozart said, “and being able to recognize different coverages and what the corners are giving away in the coverages.”

The more the quarterbacks watch, Cozart said they become increasingly aware of defensive alignments, allowing them to more comfortably get the offense in the correct play to attack its opponents’ weakest spots.

Each coach has his way of utilizing the unique viewpoints — as often or seldom as he sees fit. Love feels confident the added variety provided by the drones adds value both to the way the Jayhawks examine their progress and prepare for the future.

Stewart and his teammates had no idea just how useful those humming, flying contraptions would be.

True as that may be, Love knows there’s only one reason Beaty granted him the freedom to use the drones in the first place.

“The main objective, though,” Love said, “is to help us win football games.”

This article would have been so much more fun to comment on during the Mangino or Weis eras where the drones use as ferry between the practice field and Wing Stop or McDonald's could have been reported. And then the subsequent follow up into the drones improper use could have won the LJW numerous awards for investigative reporting. Then they could have afforded to keep Gary Bedore on tap (see what I did there?) and the course of history would have been changed forever.

WHERE THE HELL IS THE 2016 FOORBALL SCHECULE, ALONG WITH TV STATIONS AND TIMES?

The football schedule, as always, is a click away when you're on the KU football page. Just click on SCHEDULE in the upper, right-hand corner of the page.

Not all the times and TV stations have been announced yet. That comes about 2 weeks ahead of time for Big 12 games.

The foorball schedule is still under review by the big xii

In defense of Bob Bailey's comment, when one looks up the football schedule on the mobile site, the 2015 schedule is still displayed.

Thanks for the info, Michael.