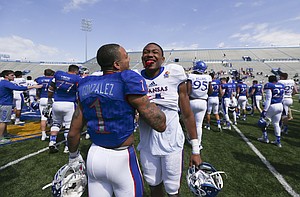 Greed is good Mr. Gonzalez, be as greedy as you want.

Random notes from the game...

..Impressed by Brewer. For a walk-on freshman, the dude looks like he absolutely belongs.

..In case anyone had any doubt, Willis will be your starter - unless he breaks both wrists.

..The defense looked good. Seurer almost angled Gonzalez out of bounds before the TD. I was impressed on that play.

..Kicking still a question mark. Typical big South wind and we missed a 46 and 49 with the wind at our back. Snaps were consistently off-target.

..Great atmosphere. I thought the crowd was a little bigger than last year. Band, cheerleaders, dancers.... It was a nice setting.

..Saw Toben being interviewed on the sideline. The guy is HUGE!

..Sullivan showed that he can make the move from Fort Hays State.

..Saw Landen in the stands. Congratulated him on a great season.

..Went to Mexiquisito on Mass afterwards. Best mexican restaurant in town, and it's not even close.

..Have you out-of-towners purchased your Coaches' Corner tickets yet? Start a collection, frame them up. They'll make a great part of your Jayhawk den and make a great story for friends and family: "I buy season tickets every year even though I don't get to go." Kind of cool, actually...... Might as well be cool rather than be lame.

Loved your comment "..In case anyone had any doubt, Willis will be your starter - unless he breaks both wrists." Hope the coaches realize that and don't try to force Cozart to still come in. Kinda' sad Stanley has not work out for us. The way he was introduced during recruiting (used to the same systems etc) had raised my expectations.

There's a reason why a he was a 2 star recruit. Woth him being from Miami, if he was better, there would've been a bunch of elite schools after him.

The defense looked good against a crappy offense. There were still enough signs that a pass rush is all this team is going to be good at on defense.