Dockery remembered coach Ray Bechard telling her during the recruiting process that one of the benefits to choosing KU would be having the opportunity to play in the NCAA Tournament every year.

So she came to Kansas from Richmond, Texas. And as of Thursday around 6:30 p.m., Dockery will have become the first volleyball player in KU history to play in four NCAA tournaments.

“It’s a whole different feel from playing in the regular season,” Dockery said. 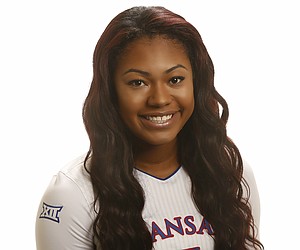 Because the NCAA did away with the capacity restriction that made 1,300-capacity Horejsi Center off limits for tournament competition, the feel will be at once bigger and more intimate when Kansas faces Furman on Thursday night.

Add a bitter rival to the mix for a potential Friday match vs. Missouri, with the winner advancing to the Sweet 16, and never-tame Horejsi could grow wilder than ever.

Kansas takes a 26-2 record into the postseason, having lost twice to Texas, at home in five sets on a night in which the Jayhawks could have delighted the Horejsi crowd with a four-set victory if only it had produced a decent night serving.

Dockery traced the roots of this special season to a seven-match, 12-day summer trip to Italy, France and Spain.

“I feel like that was a big part of having us learn about one another off the court as well as on the court,” Dockery said. “We were able to learn how this person plays, how to motivate this teammate, how to be a teammate, what will help us and what won’t help us. We don’t have anyone who mopes around. Everyone is so engaged and focused and wanting to make each other better all the time. That’s all we really talk about, is how to get better every single day.”

Thursday not only will mark the fourth consecutive NCAA Tourney for KU, but a victory would make it 100 in four years.

“She’s been out there for most of them,” Bechard said of Dockery. “When you can speak to recruits or speak to anybody, ‘Hey, we’ve had kids playing in the NCAA Tournament all four years of their career here,’ I think that speaks to a program that’s becoming consistently pretty solid.”

— Tom Keegan appears Sunday night on The Drive on WIBW-TV.

Keep up the great work! RCJH!

Play hard against Furman on Thursday. One game at a time.... all the way.

As great a season as it's been, the biggest proof of whether KU is for real will come in the tournament.